Ever wanted to watch the game mere inches from the Fenway dirt while spying on Dustin Pedroia? Now's your chance. 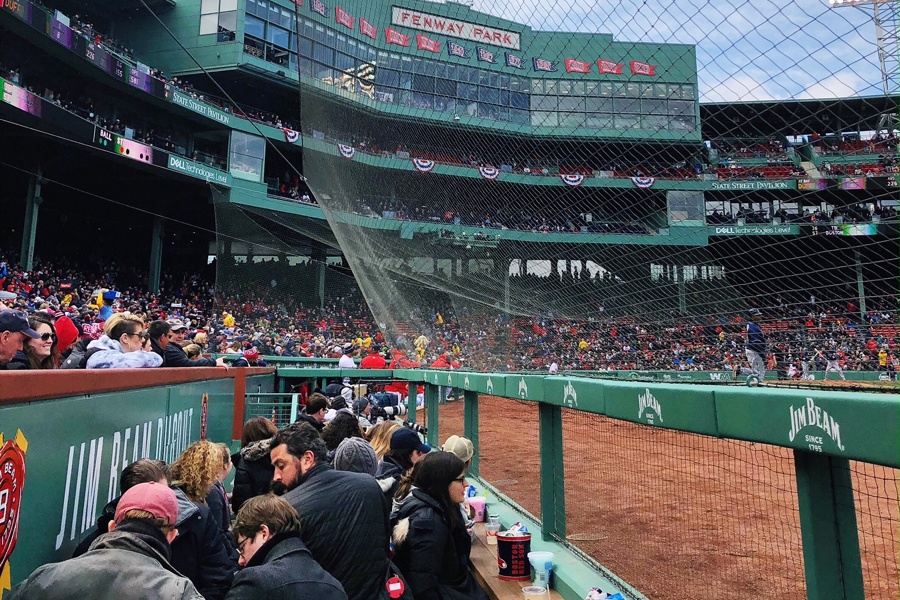 There’s already no experience in baseball quite like seeing the Red Sox at Fenway Park. There’s just so much history in the place, which first opened in 1912 and still occupies a special place in the hearts of fans and foes alike. Unique seating has always been part of that legacy. Take, for example, the park’s legendary wooden grandstand seats—which, while not exactly comfortable, are priceless artifacts. Or Ted Williams’ red seat. Or the seats atop the Green Monster, which have been listed as among the most unique views in the majors.

This year, the Sox have something new up their sleeves: The extremely buzzworthy Jim Beam Dugout. Among a few new additions to Fenway, the dugout is located mere feet from the home team’s actual dugout along the first-base line, and gives fans a players’-eye-view of the action. The only way you could actually get closer to the thick of it is if you were on John Henry’s payroll. 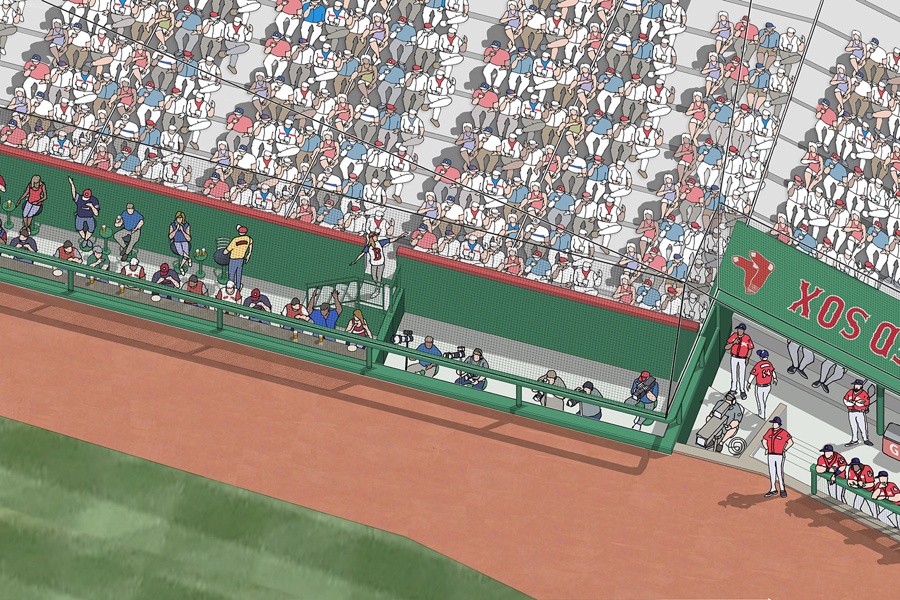 See what I mean? | Rendering via Fenway

Needless to say, the seats have become some of the most sought-after in the stadium. And needless to say, we had to give it a shot, and the good people at Fenway Park were gracious enough to let us be among the first to test out the space. By luck, it happened to be an incredible game, even if it was frustratingly close to freezing outside. The Sox came back from a six-run deficit to beat the Rays 8-7 to keep their remarkable winning streak alive. And we saw it all go down, so close we could smell the dirt. I asked a few Boston staffers to (anonymously) share their thoughts about the experience.

Before we made it down to the Dugout, we took a tour of the stadium ventured out onto the field to watch batting practice and take about a thousand pictures. Then we headed up to the Royal Rooters Club, where, instead of Fenway Franks and peanuts, we dined on chowder, steak tips, asparagus, and nachos with Sam Adams chili. “I’ve never eaten that well at a baseball game before,” one Boston staffer says. The food isn’t really the main attraction in the space, though. We found ourselves gawking at the displays of historic memorabilia, including a glass case packed with dozens of World Series game balls dating back to the 1920s, one of which is signed by the Great Bambino himself. Eat your heart out, Sandlot. 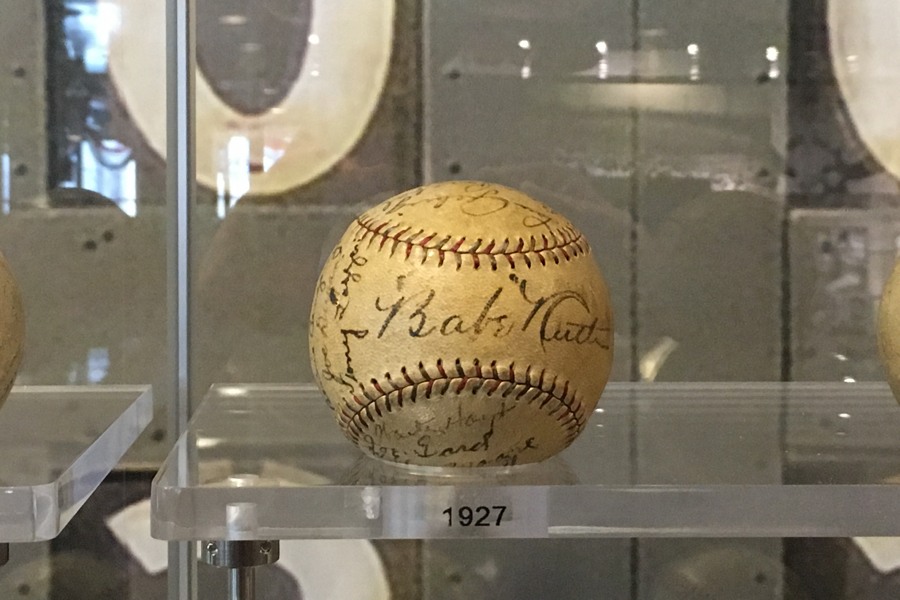 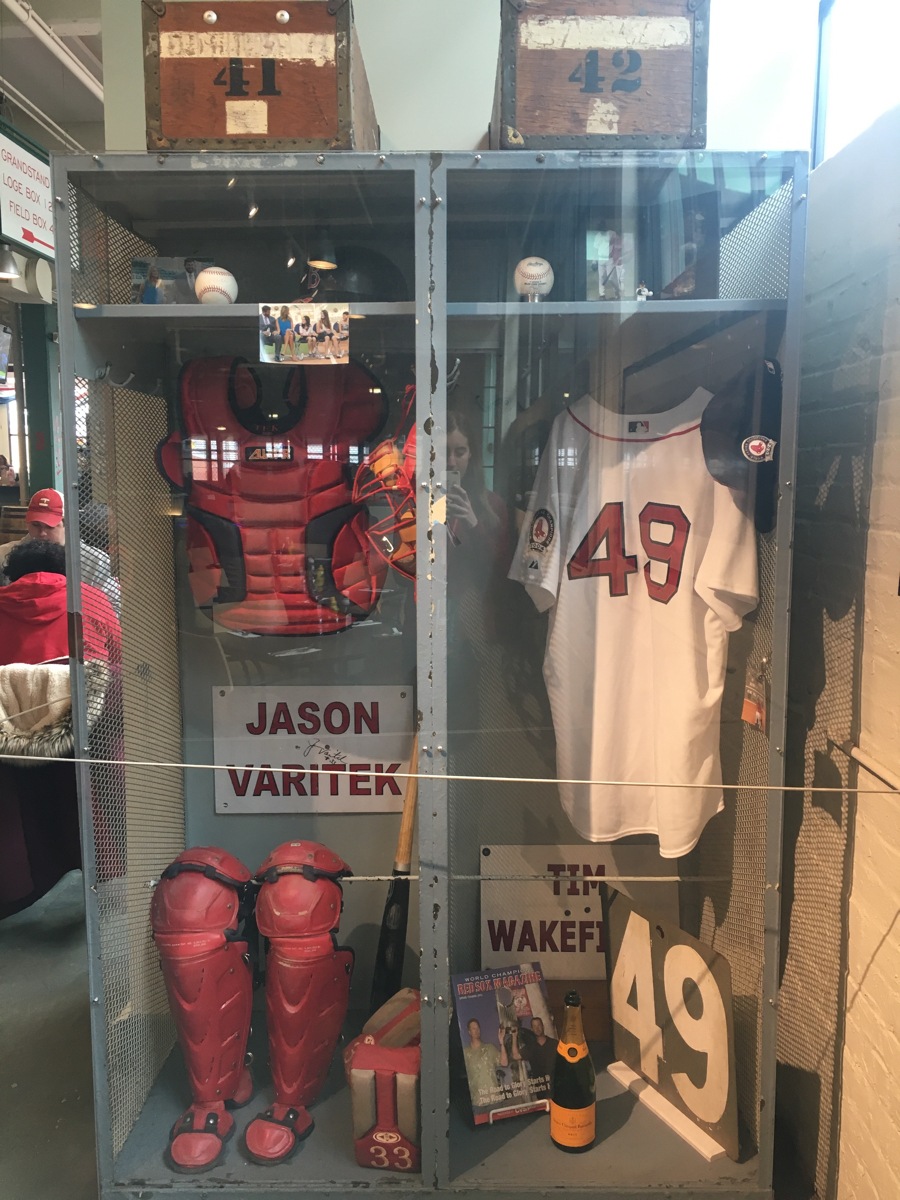 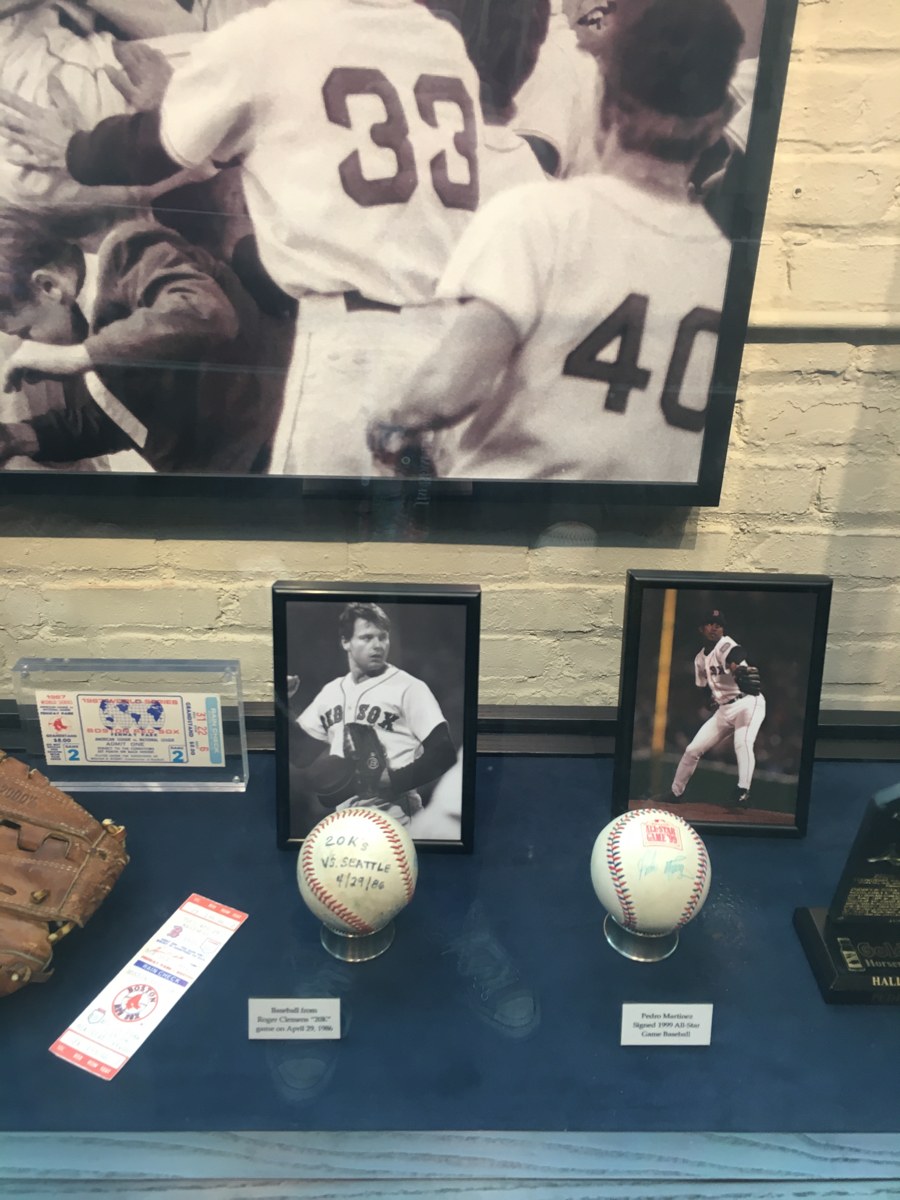 Stuffed on tips and Jim Beam-laced cocktails, we made our way down to the liquor-branded Dugout where—surprise!—there were plenty of bourbon drinks and Boston Beer Co. beverages to go around. “It’s probably worth whatever this thing costs just to skip waiting in line for a beer,” a staffer says. “We were offered drinks as quickly as they cleared away the empties,” said another.

In the below-ground space is a long wooden bar at ground level with a row of cushioned stools against it. On top of the bar, the Fenway staff helped us answer the question: Will a group of two-dozen adults eat eight tubs of cotton candy if it’s placed in front of them? The answer is yes.

The Dugout has enough room to sit, lean, or walk back and forth, unless everyone happens to be jumping around to celebrate. One member of the Boston crew said they would “think twice about squeezing in there with 24 rowdy fans,” but we did just fine. We can confirm there is plenty of space for medium-aggressive high fives.

The first thing you notice down there is how breathtakingly close you are. To everything. For some perspective, a net separates the Dugout on its left side from a handful of credentialed photographers, who are placed there to get the best possible shots from the field. Then, just beyond the photographers is a barely obstructed view of the Boston Red Sox. I mean, they are right there. “It’s very possible I made eye contact with Dustin Pedroia,” one staffer tells me. “Don’t gossip about them,” says another. “They can probably hear you.” 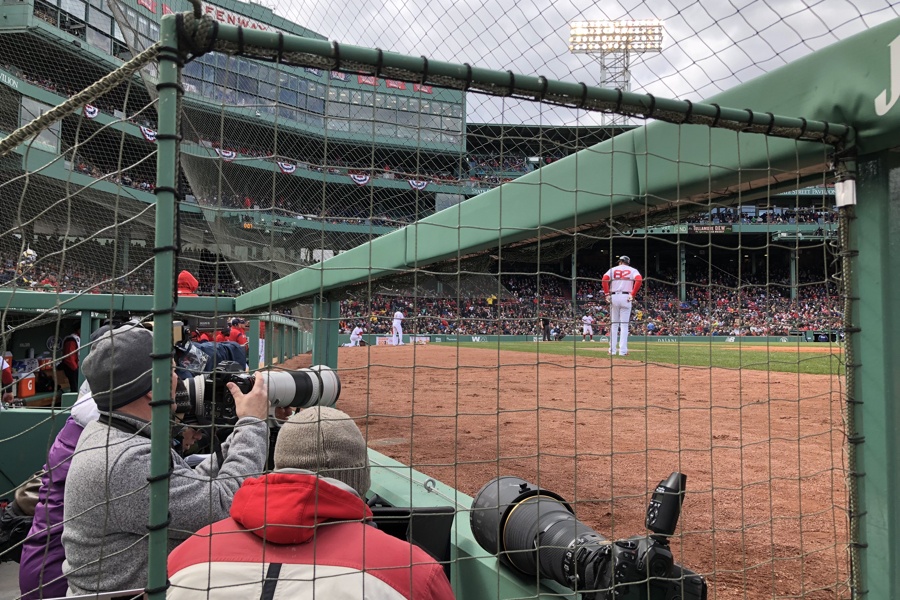 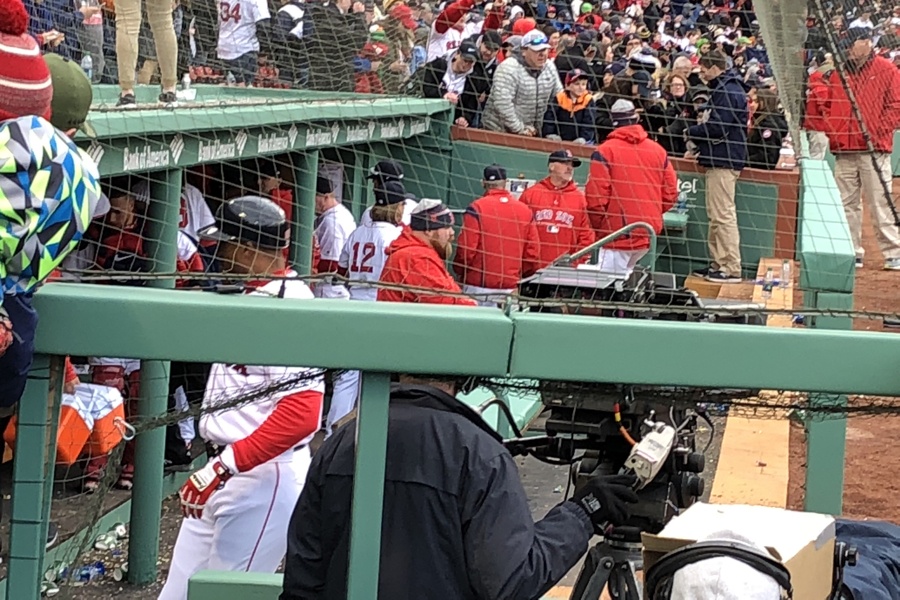 So, yes, there was some spying going on. And if the Sox were creeped out by all of our smartphones pointed in their direction for hours and hours, they didn’t let on. None of them stopped to chat with us as they made their way on and off the field—they do, after all, have a job to do—but the first base coaches for both teams did come by a few times to shoot the breeze. Both rejected our offers to slip them a Jim and Cola. Probably for the best. 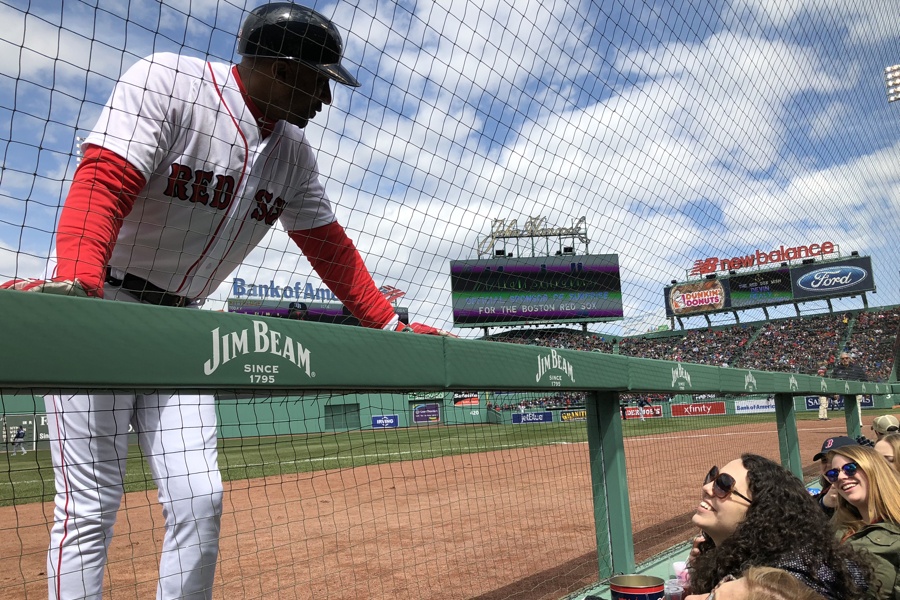 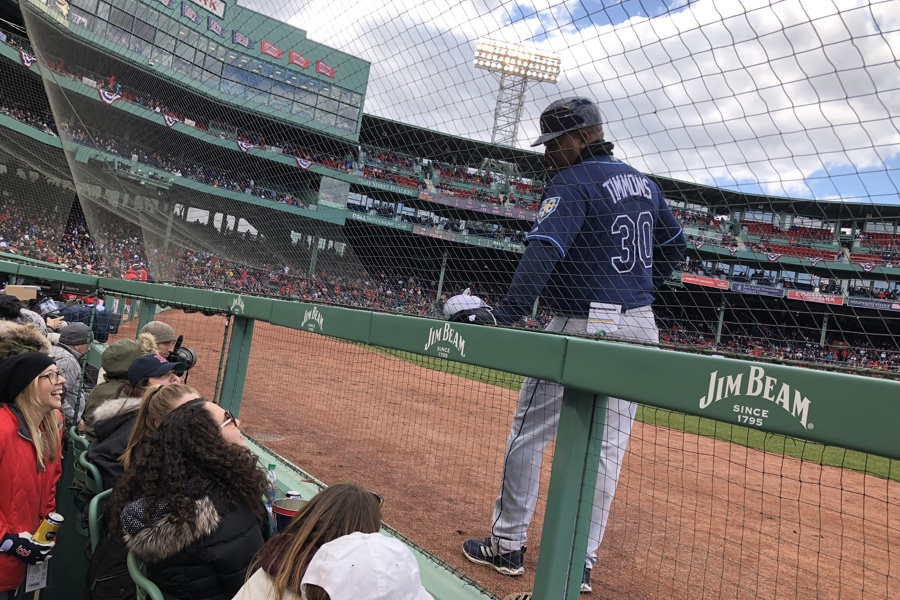 One of the many attractions in the Dugout is a staircase that leads to the rest of the stadium’s seats. You can’t help but notice that it’s basically a stage, and I’m willing to bet a certain kind of Sox fan could make the most of it. We kept talking about how you could definitely start the wave from there, for example. We didn’t. But you could.

As for the game itself, being that close makes it equal parts exciting and, in some tense moments, terrifying. A lot of plays end up at first base, so it’s cool to see it happen from that angle. Have you ever looked up at a Major League Baseball game to watch a nail-biting throw to first? Before now, neither had we.

I think the the moment that really drove home how unusual this whole Dugout concept is came near the end, when the Sox rallied in the 8th inning to pull ahead. All of us were watching anxiously as it all unfolded. We looked to our left, and so were the Sox. There they were, pressed up against the fence at the front of their dugout, while we sipped Sam Summer in ours.

Oh yeah, another tip: Keep an eye on the snacks, as things can get messy.

“Field dirt sprayed near my cotton candy as a player went to catch a foul ball,” one staffer says. “And I liked it.” 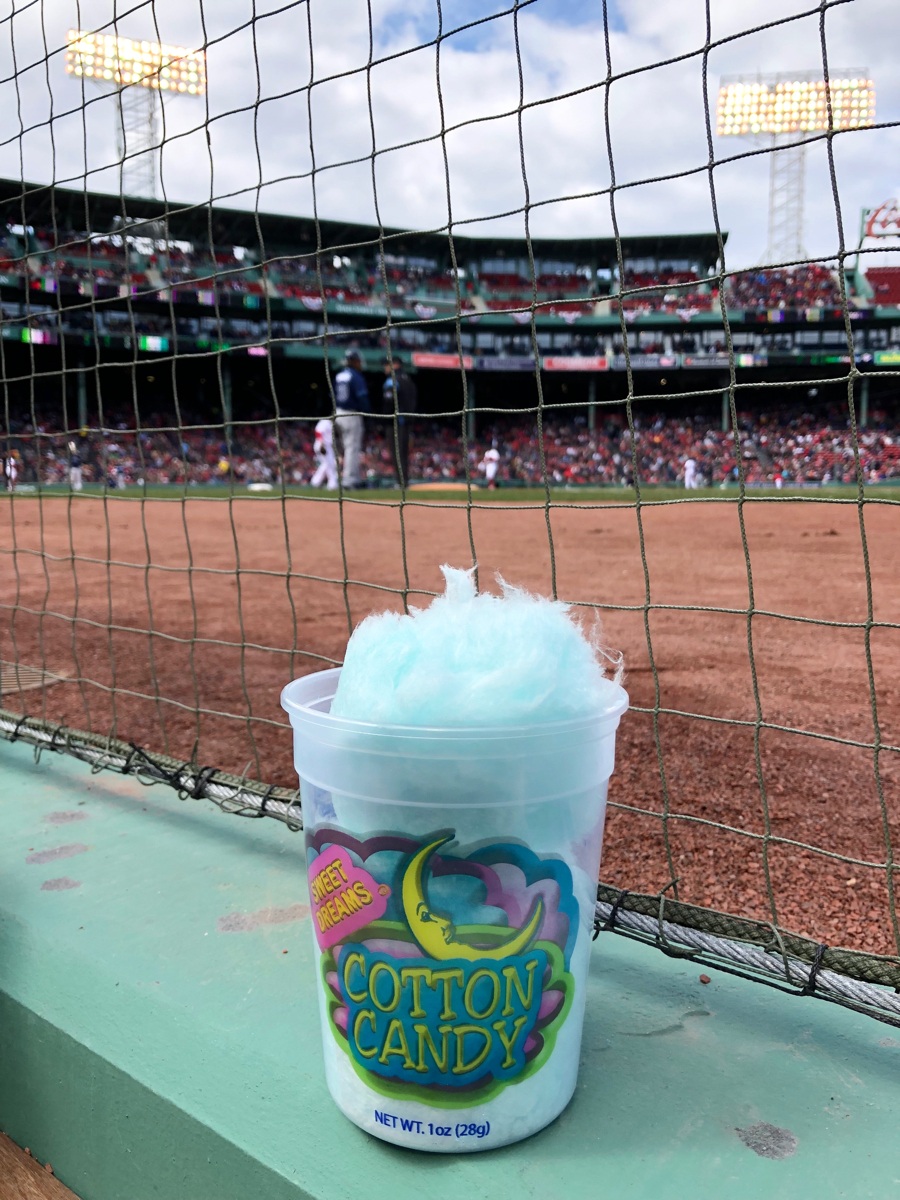