The man who plays Boston's most well-known messenger on Patriots' Day talks horses, history, and how his reenactment skills make him a great wingman. 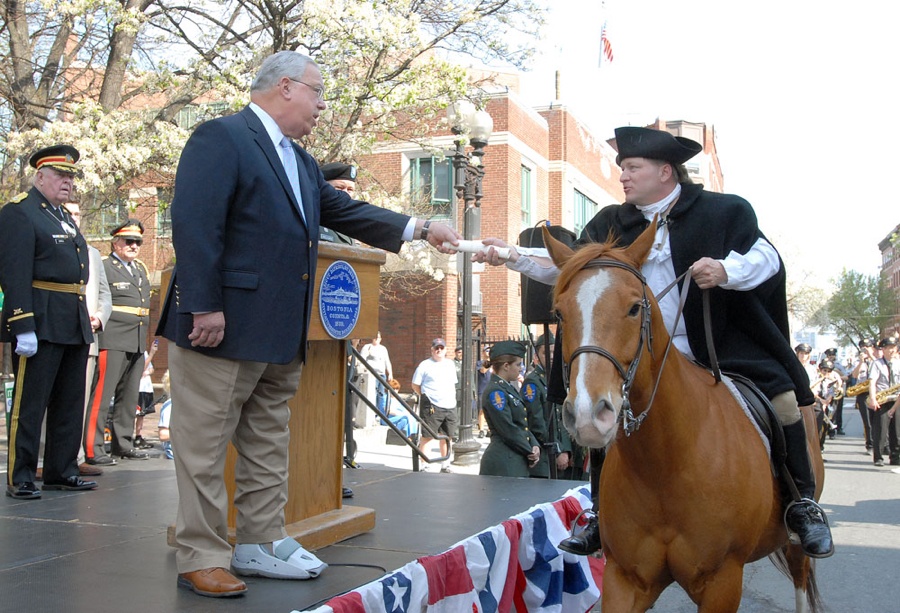 What’s it like to have one of the coolest jobs in Boston? We want to know. So we’re tracking down the city’s most interesting employees and asking them the questions that need answering. Have a suggestion? Send us a tip to [email protected].

Paul Tobin loves his job. Well, it’s not a job, technically, as he does it for free. But it’s one hell of a responsibility, and one he takes very seriously. Off and on for the last 26 years, Tobin has suited up for the National Lancers and galloped west from Boston on Patriots’ Day in character as Paul Revere, reenacting one of the most iconic moments in Revolutionary history. On Monday morning, Tobin, as Revere, will appear on horseback at Boston’s Old North Church before setting off on the route traveled by his real-life forebear to alert the Minutemen that the British were, in fact, coming.

What’s it like having such a big role to play in a Massachusetts tradition that’s now more than 100 years old? How, exactly, does one become a horse-riding reenactor? Does being Paul Revere make you a good wingman? We asked, and Tobin answered.

How does one become a Paul Revere re-enactor?

My life-long love for horses and the opportunity to work closely with them drew me to the Massachusetts National Lancers—who have been reenacting the Paul Revere and William Dawes rides since 1914—in 1992 and I have been there ever since. Alongside my brothers Chris and Andrew, we were able to learn from long-standing members and leaders, many of them distinguished and honored veterans of our military. The commitment and dedication these men (and women), shared to keep the history of the Paul Revere and William Dawes rides rides alive in Massachusetts, was infectious.

Not only were the Tobin brothers inspired and compelled to help ‘carry the lance’ forward, we were amazed at the reaction of the crowds in each community. The challenge of training our horses to safely and successfully complete this ride was one we whole-heartedly embraced. How cool!

How long have you been doing this?

The National Lancers have been re-enacting these rides since 1914, but I and my brothers have only been involved for 26 years. The Lancers have a rotation of riders portraying Paul & William and have recently begun to split the rides in half, to allow each member to participate a bit more and also gain the necessary experience for future rides. This also allows us to expose more of our horses to the sights and sounds they will need to learn to ignore as they safely navigate the streets from Boston to Lexington.

Paul Revere riding to Lexington with the Zakim bridge in the background. pic.twitter.com/wPs4TPnJ

Where did you grow up?

I and my 5 brothers grew up in Holliston. Our dad introduced us to the joys of horsemanship. I am not sure our mom shared this vision, but once she met our first horse, ‘Chief’ and saw the enthusiasm we all shared in caring for and riding him, she quickly became one of our main supporters, even feeding him our leftover table vegetables. For my dad, Chief would run and jump and drink beer.

Learning to understand, appreciate, and enjoy horses was a gift we will always be thankful to our parents for. Between Chief’s ‘home schooling’ and the Holliston 4-H Saddle Dusters, we learned all about horses and were forever bitten and smitten by the horse. My brother Andrew has one digit too short to attest.

What do you do for work when you’re not Paul Revere?

The Lancers are composed completely of volunteers. Many of them are active or retired members of our military, but there are also many members that have 9-5 jobs (like myself). I work for an international marketing company called Smart Source, located in Waltham.

What exactly will you be doing on Patriots’ Day?

Paul Revere leaves from the Old North Church in Boston, after a brief parade and few auspicious words from Mayor Marty Walsh and assorted dignitaries. We canter off to our next stop in Charlestown, at Paul Revere Park. In each town, there is a podium and large gathering of supporters. He clip clops along to Lexington, stopping along the way at playgrounds for the kids to meet the horse and get a keepsake photo, and also at elderly housing apartments, where they come out every year, despite their limited mobility to meet and cheer us on. This touches the heart to be able to make their day. In Lexington, the streets are lined with people cheering on Revere and Dawes as they approach Lexington Green at a breathtaking clip.

For me, it is the cheering of the crowd and the awaiting arms of my family that compels us forward. At that speed and nothing but your horse between you and the asphalt, it is the intense focus and drive to finish that wills us on to the Minuteman Statue.

What was the best, and what was the worst, experience you’ve had on the job?

Great memories come in waves as I recollect them. Mostly the people we meet along the way that will come out every year with carrots and stories about how they used to come as a child with their parents or grandparents and they now come with their children and/or grandchildren. Also, children in colonial garb that have wonderful questions and bright eyes of interest.

Another memorable horse-related event was when I was riding a young horse on his first Revere ride and I was galloping down the ‘home stretch’ towards Lexington Green, where they had freshly painted the crosswalks in a bright green. Well, this horse was also a jumper, and he mistook the crosswalks for jumps and let me tell you, that was an indelible memory, as he leaped over each crosswalk, creating sparks when he landed with his metal-clad hooves. Yeehaw!

Easily the worst experience for us was the day of the Marathon bombing. It was such a beautiful day, as we rode back to Camp DiCarlo in Framingham, until we saw cruiser after cruiser flying in the opposite direction towards Boston, as no firefighter or policeman could get there fast enough. We had no idea what had occurred until then and whatever fun or lasting memories of that ride we had were quickly erased by the horror of that event. Mind- and body-numbing for us all. Complete silence, as no one could comprehend such a despicable evil act on a day we had only known as a celebration of our Boston heritage and historic importance.

We train all of the National Lancer horses to be acclimated to large crowds, tight spaces, and the rigors of a taxing 21 mile journey atop pavement. Only the most athletic and trusted horses are used for this ride. On Patriot’s Day, for the Paul Revere ride, the horse’s name is Brown Beauty, as that was the horse’s name that was loaned to him by Deacon Larkin that night. Some of our best ‘Revere’ horses throughout the years names are: Diablo, Berretta, Liberty, Amigo, Lucille, Dayshow, Thumper, Lancer, Sabre, Patriot, Taps, and now Penny.

Do your friends make you do Paul Revere impressions?

My friends know me as many different things, and they all have their own accomplishments, so rarely do they speak of it. I hope most of them know me best as a good friend and family man, but my Paul Revere portrayal has certainly helped break some ice when they wanted to meet someone of the opposite sex.

My family is another story, as I am often chided into the recitation of the William Dawes poem or teased about the time I stopped for a cannoli at Mike’s Pasty in the North End as I rode by. It’s now a tradition!

What makes Paul Revere a legend?

He was really just a normal guy trying to do the right thing for his family, friends, town, and country. He was an accomplished rider and a trusted and resourceful comrade. Revere and the other Sons of Liberty were willing to risk their lives and freedom for the greater good of all. His legendary ride that night portrayed the willingness of the people to fight for what was right and drive tyranny from the Boston shores.

Anything else you want the fans to know?

It is an honor and a privilege to be able to portray Paul Revere. The proud history of the National Lancers, organized as a mounted militia in 1836 by Governor Everett to quell the Boston riots, is kept alive by our presence on Patriots’ Day and as we participate in parades and events throughout the Commonwealth. In particular, the DiCarlo family has been in charge of the Lancers for decades and are steadfastly bound to ensuring the history of the Lancers. It is truly a year-long commitment. I am blessed to have my family’s support and understanding of my personal passion for horses and commitment to keeping the rides of Paul Revere and William Dawes alive.