The Worcester native was well known for his anti-war and anti-political system protests. 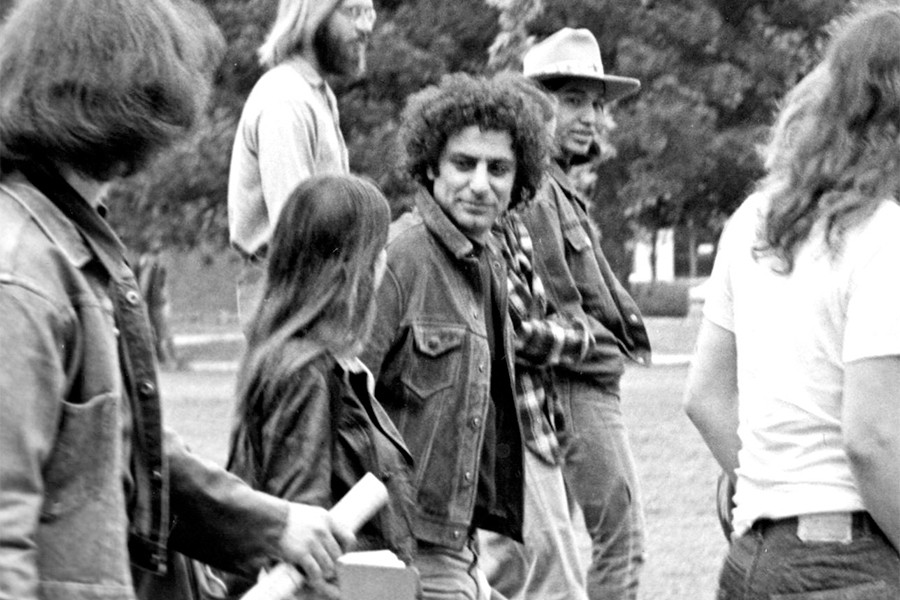 Abbie Hoffman visiting the University of Oklahoma in 1969. / Photo by Richard O. Barry via Wikimedia Commons

Worcester native Abbie Hoffman was a legend. The prolific activist and counterculture icon pioneered the Yippie movement of the 1960s and made national headlines for his anti-war protests. And when Hoffman died by suicide on April 12, 1989, he left behind quite the legacy of hijinks.

He grew up in a Jewish household with his parents and two younger siblings. His childhood was filled with adventures—from stealing cars and going joyriding to hustling pool halls. Hoffman was expelled from Classical High School in Worcester after a fight and eventually graduated from Worcester Academy before going on to Brandeis University. At Brandeis, he explored psychology  and was known for being passionate, bright, and a bit rebellious. In 1967, Hoffman organized a group of people to throw money on stock traders at the New York Stock Exchange in an event Smithsonian.com called “guerrilla theater.”

Hoffman explained what happened in his autobiography: “It all began with a simple telephone call to the Stock Exchange. I arranged for a tour, giving one of my favorite pseudonyms, George Metesky, the notorious mad bomber of Manhattan. Then I scraped together $300, which I changed into crispy one-dollar bills, rounded up 15 free spirits, which in those days just took a few phone calls, and off we went to Wall Street.”

The political shows didn’t stop at the Stock Exchange.

After contributing to the Civil Rights Movement, Hoffman started the Youth International Party, known as the Yippies. The 1968 Democratic Convention was the culmination of several issues he protested against, and Hoffman made sure to make the trip to Chicago. Thousands of anti-war protesters gathered at the DNC and were met by Chicago Police, who used tear gas and engaged in violent clashes with the activists. Hoffman, along with six others who collectively became known as “The Chicago Seven,” was arrested for conspiracy and inciting a riot at the DNC.

Hoffman and the rest of the Chicago Seven eventually had their riot convictions reversed, but the DNC incident would not be his last encounter with law enforcement. In 1973, Hoffman was arrested in New York for cocaine possession and started going by the pseudonym Barry Freed. A few years later, after he had reassumed the name Abbie Hoffman, the activist was arrested at the University of Massachusetts at Amherst alongside Amy Carter, daughter of President Jimmy Carter.

The subsequent years encompassed the end of the Vietnam War and Hoffman’s diagnosis of bipolar disorder in 1980. The manic and depressive episodes, along with lingering legal stresses, were a devastating cocktail for him. Hoffman was found dead in 1989.

Hoffman’s legacy goes beyond a being portrayed in Forrest Gump. He made a mark at a time in American history filled with unrest and insecurity. When others were afraid, Hoffman stood up for what he believed in. And Hoffman’s antics—complete with a side of outlandish theatre—make him a legend of anti-establishment protests.