Twitter Was Really Excited about the Red Sox-Yankees Brawl

Pedro Martinez, Chipper Jones, and tons of fans weighed in on the fight at Fenway. 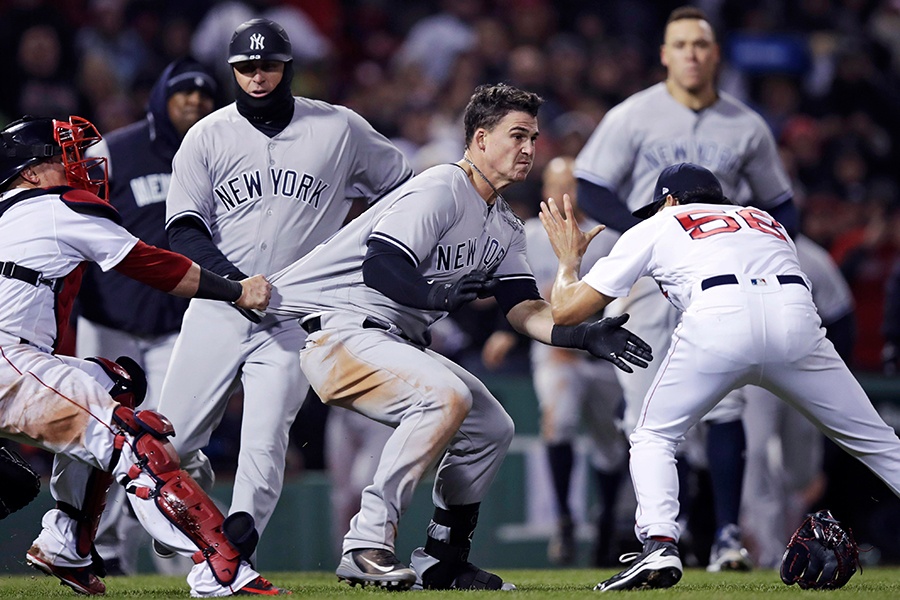 It may have been freezing at Fenway on Wednesday night, but the action on the field was red hot.

In the third inning, Yankees designated hitter Tyler Austin slid spikes-up into second base, catching Red Sox infielder Brock Holt on the ankle in the process. The two exchanged a few words, and though players from both sides rushed onto the field, the situation soon relaxed.

But the tension reached a fever pitch in the seventh inning when Red Sox reliever Joe Kelly beaned Austin in the back. Let’s observe what happened next, shall we?

Benches clear, punches thrown in Yankees-Red Sox after Tyler Austin is hit by a pitch from Joe Kelly. pic.twitter.com/wvqoak8QMV

Twitter naturally went wild over the brawl, with several fans expressing excitement that the subdued nature of the rivalry’s last few years had been cast aside. Twitter user Jose Bermudez nailed the general reaction. There are very few times in which an all-caps tweet is warranted, and this is one of them.

First-ballot Hall of Famer Chipper Jones, who spent his entire career in Atlanta and is thusly an unbiased and reliable source of wisdom on the matter, knows what’s up.

U slide in with ur spikes up and catch a piece, ur gonna get thrown at young fella. That’s how baseball works. It polices itself, whether people like it or not. That will never change. Love the spirit in both squads though. #Redsox/Yankees

My morning has strictly consisted of me watching every angle/video of the brawl last night. The Red Sox/Yankees Rivarly is BACK

Hero and Hall of Famer Pedro Martinez, who, of course, has a bit of personal experience with Yankees-Red Sox tussles, chimed in with some advice for Kelly.

The only thing I would had done different than Joe Kelly tonight, is I would’ve hit Tyler Austin at his previous at bat. Other than that, Kelly executed perfectly #YankeesvsRedSox

Sliding with the cleats up is a no-no in baseball. That means fight fight fight! #YankeesvsRedSox

And, of course, it wouldn’t be Twitter if we didn’t have a couple of meme adaptations to celebrate the brawl.

If you then you don’t
don’t love deserve
me at my me at my pic.twitter.com/uMg3VImvUG

The teams face off for the rubber match of their three-game series on Thursday at Fenway and will meet again on May 8 in the Bronx.