The Marathon has returned, and we'll be tracking all the triumphs, and downpours, this day has to offer. Check back throughout Marathon Monday for updates, and don't forget to follow us on Facebook, Twitter, and Instagram. 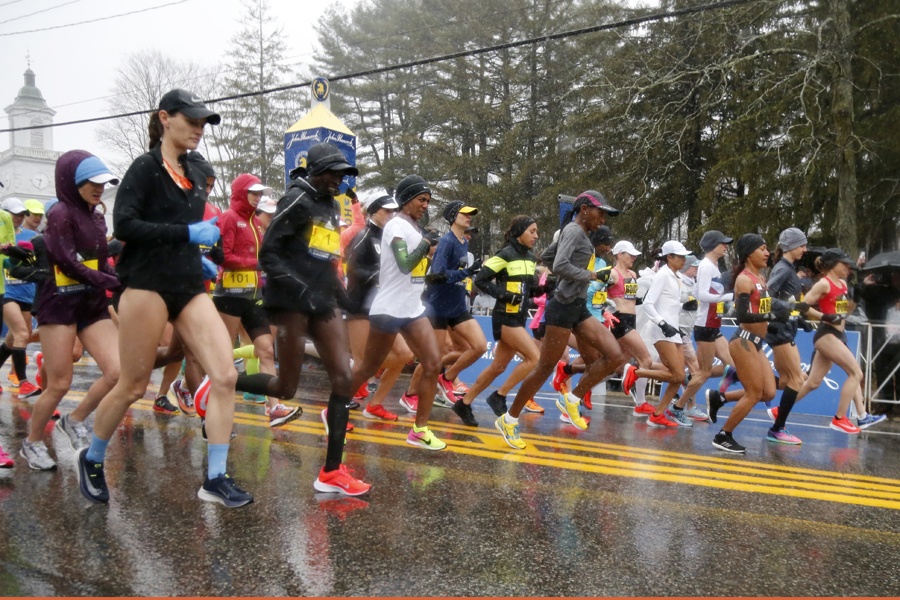 The elite female runners break from the starting line in a downpour during the 122nd running of the Boston Marathon in Hopkinton, Mass., Monday, April 16, 2018. Image via AP Photo/Mary Schwalm

Shalane Flanagan, who ran the first stretch of the Boston Marathon with eventual winner Desiree Linden, showed her support for her teammate on Instagram. The Marblehead native, who captured gold at the 2017 New York City Marathon, finished seventh among women with an unofficial time of 2:46:31.

THIS WOMAN!!!!! Congrats Des!!!!! Boston Marathon freakin champion!! We are so proud and love you. Thanks for being a true friend and teammate on the course and also for letting me goober all over your wreath and medal : @erinstrout

Hereford Street is littered with rain gear as runners shed their layers in the marathon’s final stretch.

Runners toss aside their plastic ponchos in the pouring rain in Hereford. #BostonMararthon pic.twitter.com/bhTVtV1xfC

The weather has made it a busy day for emergency responders along the race course, and medical stations have logged more than 1,000 visits today, according to Boston Emergency Medical Services.

Medical stations along the Marathon route and finish area have had over 1000 encounters so far. #bostonmarathon pic.twitter.com/h6u78Jznav

We had a feeling the rain wouldn’t keep many runners away. Of the 30,039 who registered to run,  27,362 registrants picked up bibs. Of those, 27,048 showed up at the starting line on Monday, race officials say, adding that the turnout is about on par with other years, when it isn’t a brutal rainstorm. Marathoners are no joke, people.

The Massachusetts Emergency Management Agency released stats showing the toll the weather conditions are taking on some runners. As of 2 p.m., 45 people had been transported by EMS, 153 were being treated in medical stations, and at least 875 had been seen at medical tents along the race route, excluding the finish line.

Officials have said hypothermia is a concern, as runners’ temperatures can drop quickly if they stop running. Warming centers have been opened along the route, MEMA announced.

Due to the inclement weather conditions, communities along the marathon route have opened warming centers in #Natick, #Wellesley, #Newton, & #Brookline. #BostonMarathon https://t.co/uuq3xVtfUn

There were oh so many good (and soggy) dogs out there today, and we rounded up some of the best.

At the post-race press conference, Des Linden said she was still in disbelief about the outcome this year, which saw her become the fist American woman to win the marathon in 33 years. “This is storybook stuff,” she said.

Des Linden after becoming the first American woman to win the #bostonmarathon in 33 years: “This is storybook stuff.” pic.twitter.com/0yJEa6bi5Q

She said she wasn’t feeling her best, and thought she would “drop out” before finishing.

“At 6 miles I thought, ‘No way, not my day.’ Then it was kind of hilarious how it worked out. Again, even when I got into the lead I was like this is going to go horribly wrong. I’m gonna blow up,” she said. “Then you break the tape and it’s like, ‘This is not what I was expecting today.’ But it is absolutely amazing. Running down Boylston was amazing.”

Meanwhile,  men’s champion Yuki Kawauchi, of Japan, apparently wasn’t kidding when he declared that the wind and chilly rain today were “the best conditions possible.” He said at the press conference that he thrives in the cold, including when he won the Marshfield Road Runner’s 37th New Year’s Day Marathon in Massachusetts earlier this year, when it was five degrees below zero.

He noted that the last time a Japanese man won the race was in 1987, the year he was born. “I can’t help but feel the hand of fate in this,” he said, through an interpreter.

Runners and supporters are not letting the weather hold them back.

More runners heading to the finish line as the rain continues pic.twitter.com/bRRReRMVts

No big deal, just Shalane Flanagan predicting the future back in November.

Des Linden’s very supportive husband, Ryan, has earned the internet’s love for his thrilled reaction to his wife’s victory.

FIND YOURSELF SOMEONE WHO LOOKS AT YOU LIKE YOU’RE A BOSTON MARATHON CHAMP pic.twitter.com/fXmJdsLheS

Omg seeing @des_linden‘s husband’s reaction as she sprints to the finish line is making my tear up! Way to go Des!!!

This is me watching replays of @des_linden ‘s husband cheering for her. #bostonmarathon2018 #desireelinden pic.twitter.com/mbhDZ2EK3f

Plus, Meb Keflezighi says he’ll be running the New York marathon as well.

Meb Keflezighi’s goal in his first marathon as a charity runner was to break 3 hours. He ran 3:00:13. He said Friday that he plans to race New York City in November for Team for Kids.

Yes, the weather is still pretty miserable out there.

Not sure I’ve ever been colder or wetter in my life #bostonmarathon pic.twitter.com/Y5C79Wyx2D

[1p] Where do we go from here? Moderate to heavy rain w/ embedded thunder persists through as late as 8 pm, then we clear out, dry out … pic.twitter.com/PKMaMx5cje

And if that wasn’t discouraging enough, check out this view:

That is a mighty big storm. Period. pic.twitter.com/ZqBtCPeQjF 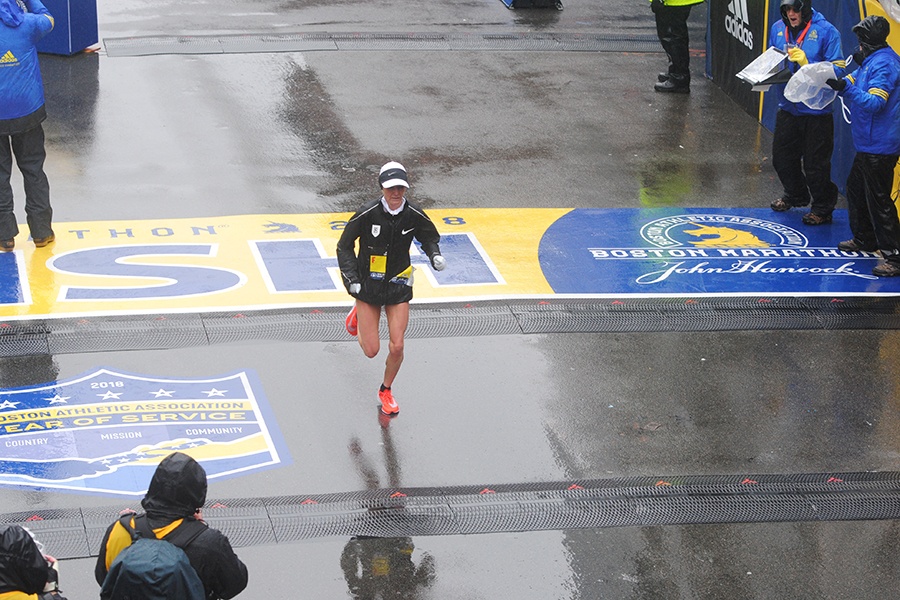 Shalane Flanagan, who last year became the first American woman to win the New York City Marathon since 1977, finished sixth on Monday, with a time of 02:46:31.

She and eventual champion Des Linden shared a touching moment during the race, when Flanagan stopped for a break and Linden slowed to let her catch up. It’s already being hailed as a testament to sportsmanship and camaraderie.

.@des_linden waiting for @ShalaneFlanagan and then running them back into the lead pack hits me where it hurts. Sportsmanship gives me all the feelings!!!#BostonMarathon 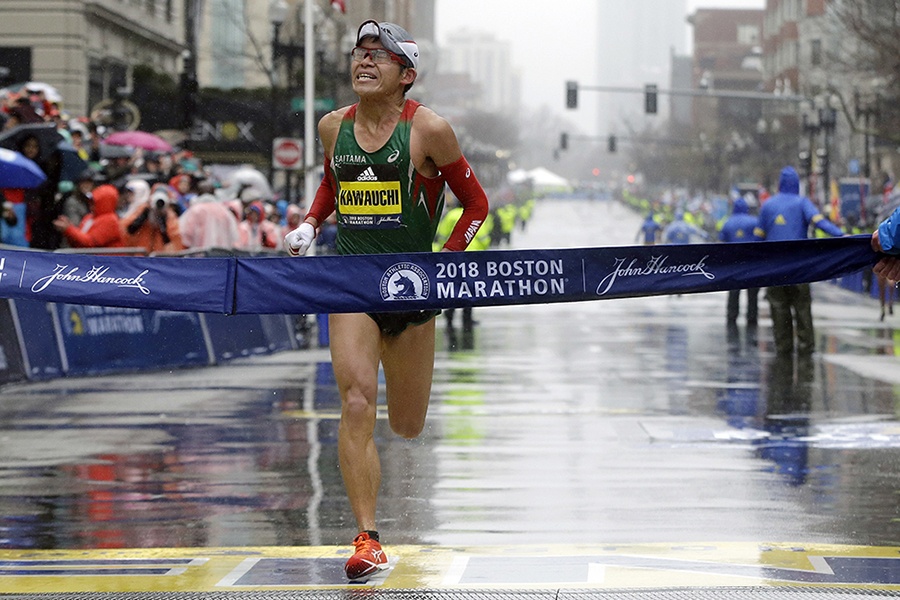 Yuki Kawauchi of Japan topped the elite men’s field at the 2018 Boston Marathon. He broke the tape with an unofficial time of 2:15:54.

He was, apparently, not fazed by the wind, the rain, and the cold.

“For me, these are the best conditions possible,” Yuki Kawauchi quipped after the race. 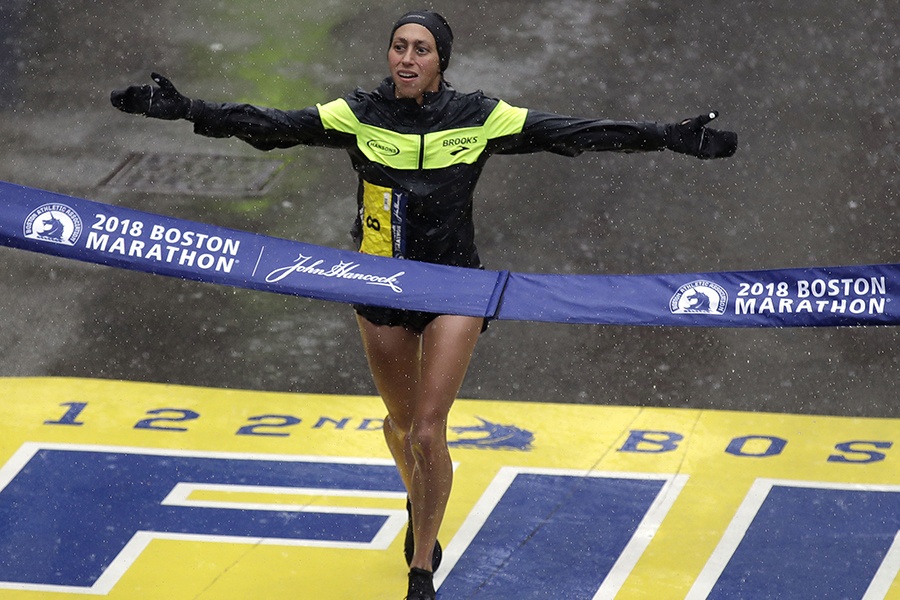 And we have our first American winner in 33 years! California native Des Linden battled the elements to come out on top.

Some local businesses say they’re seeing a drop in customers this year, no doubt because of the weather.

Adalina Keshishian of the new Cafe Landwer on Beacon St. says they were expecting more people at this point, but isn’t surprised the weather has people indoors. #bostonmarathon2018 pic.twitter.com/yC2IgC2aTG

The first winner has crossed the finish line, with Marcel Hug winning the men’s push rim wheelchair race for the fourth consecutive year.

Just how bad is it out there today? This bad:

Anyone feeling up for a run? Like, a marathon in Boston? In addition to the rain and 25-40 mph winds, temperatures at the start of the race were the coldest in 30 years. #bostonmarathon2018 #BostonMarathon pic.twitter.com/ViGv9gzQMm

The elite men are on their way!

Elite men are off followed by all the other waves of runners pic.twitter.com/PZ3QqkycOS

A little rain isn’t stopping the usual army of volunteers from showing up today to support the runners.

Dozens of volunteers are ready with water, Gatorade, and encouragement for runners at the top of Heartbreak Hill just past mile 21 pic.twitter.com/aqvyMXQrJG

How does one keep their feet dry during these long run conditions. #bostonmarathon #blisters #soggy https://t.co/HHJoKAaRgF

Things are going…NOT GREAT on the MBTA this Marathon Monday.

And the elite women have started their run! Best of luck, all.

Elite women are off! @BobbiGibb pulling the trigger on the starting pistol pic.twitter.com/EjmYIaUved

As runners head out into what feels like a monsoon on race day, the less-than-ideal weather conditions are inspiring some spirited reactions online, from the sarcastic:

Good luck to all the participants in the #BostonMarathon today! #MarathonMonday pic.twitter.com/WMfUd5PUFG

Due to inclement weather, I will not be competing in the #BostonMarathon today. Also, I’m out of shape and lazy.

The #BostonMarathon starts not far from where I sit and the weather is so crappy I wouldn’t go out for donuts, never mind a 26-mile run.

to the, um, inspiring:

#BostonMarathon special shout out to runners out there during this monsoon pic.twitter.com/jnxTJ3sizM

By the way, this guy is very resourceful:

From the “you can’t make this stuff up” file. Javier is staying dry today wearing the suit from his job at a nuclear power plant in Spain. Who needs rain gear when you have that? #BostonMarathon #WCVB pic.twitter.com/eT7Af4gXqw

One familiar sight we won’t see this race day: throngs of Red Sox fans pouring out of Fenway Park at the conclusion of the ballgame to cheer on the runners. Because of the weather, the Sox contest against the Orioles has been postponed until May 17, marking the first time since 1984 that the team won’t suit up on Patriots’ Day.

Because of the rainout at Fenway, some restaurants are expecting smaller crowds on Marathon Monday.

Eastern Standard in Kenmore Square had 1,300 guests last year. General manager Caroline Markham says they’re “not expecting as many” this year since the Sox game hasn’t been cancelled on Marathon Monday since 1984. pic.twitter.com/7Nm9LYCVcX

It may be wet and blustery as the first runners cross the marathon starting line, but the athletes certainly aren’t letting the weather get them down. Our health editor is in Hopkinton and says the mood is electric ahead of the 122nd Boston Marathon.

Very rainy but lots of energy and high morale here in Hopkinton pic.twitter.com/7mPkVluGg8

Meb Keflezighi, who won the 2014 Boston Marathon, also tweeted some encouragement ahead of the race.

Today, I’m running THE @bostonmarathon with my close friend Patrick Byerly and for @TeamMR8. “No more hurting people” #PEACE. As far as the weather…”let’s dance in the rain’” pic.twitter.com/1DDpcHfki9

Good morning! It’s finally here. The 2018 Boston Marathon is upon us. With an ominous forecast on the horizon, a crowd of hundreds of thousands is gearing up for a soggy day along the race route. Are we scared of a little rain? Didn’t think so!

For those heading into or around Boston this morning, here’s a helpful guide for navigating the MBTA on this busiest of days. Looking for something good to eat or drink on race day? We’ve got you covered, too. We also have the low-down on some Marathon-themed brews, and the elite athletes to watch this year. Keep an eye out for star paralympian Tatyana McFadden, who will be back at the starting line today after a battle with health issues.

Start times today are as follows:

The awards ceremony begins at 5 p.m. at the Fairmont Copley Plaza Hotel.