I Love My Job: Red Sox Organist Josh Kantor on His Favorite Games at Fenway Park 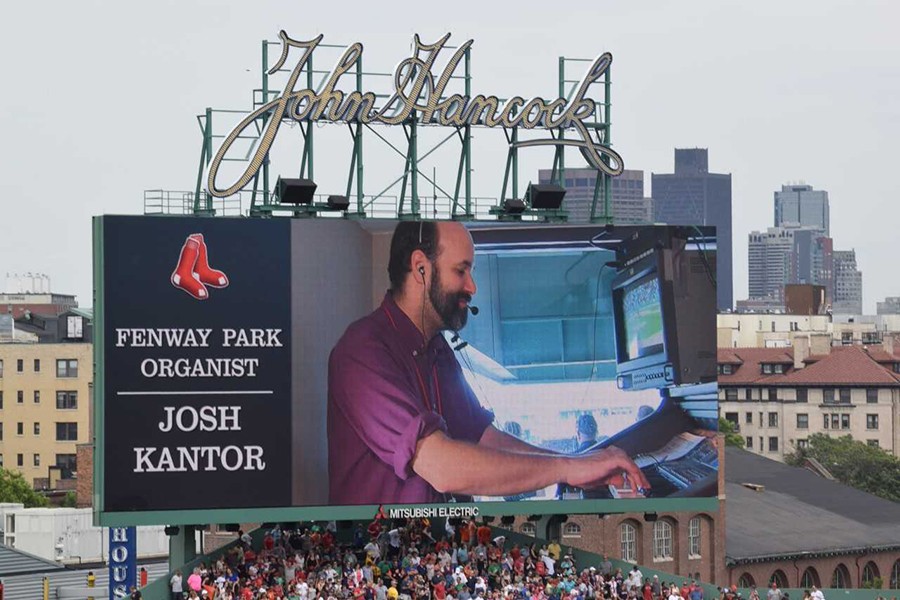 What’s it like to have one of the coolest jobs in Boston? We want to know. So we’re tracking down the city’s most interesting employees and asking them the questions that need answering. Have a suggestion? Send us a tip to [email protected].

The sounds of a baseball game are practically symphonic: the crack of the bat, the roar of the crowd, the pop of the beer tab. But beyond the cacophony of Fenway Park and the score of the game, there’s another score—a live, musical one—that tells the story of each Red Sox home game. Josh Kantor has been the team’s organist since 2003, and he says it’s a pretty great gig. A trained pianist who also dabbles in accordion music, Kantor is a lifelong baseball fan who loves fielding fans’ song requests—no matter how strange they may be. We talked to Kantor about some of his favorite memories at the ballpark, how he learns so many songs so quickly, and more.

I went to grade school in Athens, Georgia, and then I went to high school in Evanston, Illinois. In 1990, I started as an undergrad at Brandeis University. … Boston is home at this point.

What led you to the Red Sox?

They had auditions at the beginning of 2003 for the organist position. I knew someone who was working for the team at the time, someone I had performed with and had written songs with, so he knew about my organ-playing abilities, and he knew that I had good skills as an improviser, which is something that comes in handy at the ballgames. … This friend recommended me to the person running the auditions, and that was sort of a foot in the door for me to come in for a couple of rounds of tryouts.

Have you always been a big baseball fan?

I’ve been a passionate baseball fan since I was about 7 years old. I collected cards as a kid. I rooted for the Atlanta Braves when I was in grade school in Georgia, and then in high school … I was sort of drawn to the White Sox. It was sort of teenage rebellion against my parents who were Cubs fans, and also because the White Sox had [the legendary organist] Nancy Faust…. When I moved to Boston, I was 17, and the first week I was in town, I went to Fenway Park and I saw the Red Sox beat the Yankees 15-1. Mike Greenwell had an inside-the-park grand slam, and that was my first time at Fenway. I was immediately sold.

Are there any songs you wish fans would stop requesting you play?

I try to have a playful rapport with people when they request songs via social media. … I enjoy being able to have that request hotline as part of what I do. Sometimes I’ll be frank with people. I mean, I try to do it as politely and maybe tongue-in-cheek as I can, but I’ll tell people ‘I really don’t like that song, but you like it, so I’ll gladly play it for you.’

Do you have all these songs memorized? How do you know so many?

I have a good ear, so if I’ve heard a song before, I can usually pick it out if I just give it kind of a refresher listen. If I haven’t heard a song before, maybe I’ll listen to it two or three times instead of one time and just kind of lock it in. … It’s very fun and very exhilarating, especially at the end of the night when you look back and are like ‘Wow! I just played 25 songs tonight, and half of them I’d never even heard when I set foot in the building this afternoon.’

What’s the most memorable Red Sox game you’ve ever seen?

It’s over 1,200 games that I’ve played the organ for. It’s hard to pick out a single one. I think in 2013 when they clinched the World Series at home for the first time in 95 years, that was definitely very memorable to be watching that and be part of planning the music for that. The two home playoff games in 2004 that started the comeback against the Yankees were especially memorable. … Then sometimes it’s a very personal thing, like the first game that my infant niece came to. She came up, and we took a picture together sitting at the organ, and then I took her out to touch the grass on the field.

Has a player ever asked you to play their walkup song?

It’s happened a couple of times, not in recent years, but I remember there’s a left-handed reliever who was here shortly after I started named Lenny DiNardo. … He’s a big music fan, and we met at some team function and got to talking about music that we like. He mentioned that he was curious to hear how this song he liked would sound on the organ, so I played it for him a few times when he would come into the ballgame.

If you weren’t the Red Sox organist, what do you hope your job would be?

There’s a part of me that would like to have the experience of being a touring musician. I do a fair amount of that in my spare time, but I don’t have a lot of spare time. Usually three or four times a year, I’ll go out on the road for a week with a rock band, getting in a small van and playing small clubs, small theaters, and that kind of thing. And I always really, really love doing that.