"We will not be shaken," the owners of the Dudley Square market say. 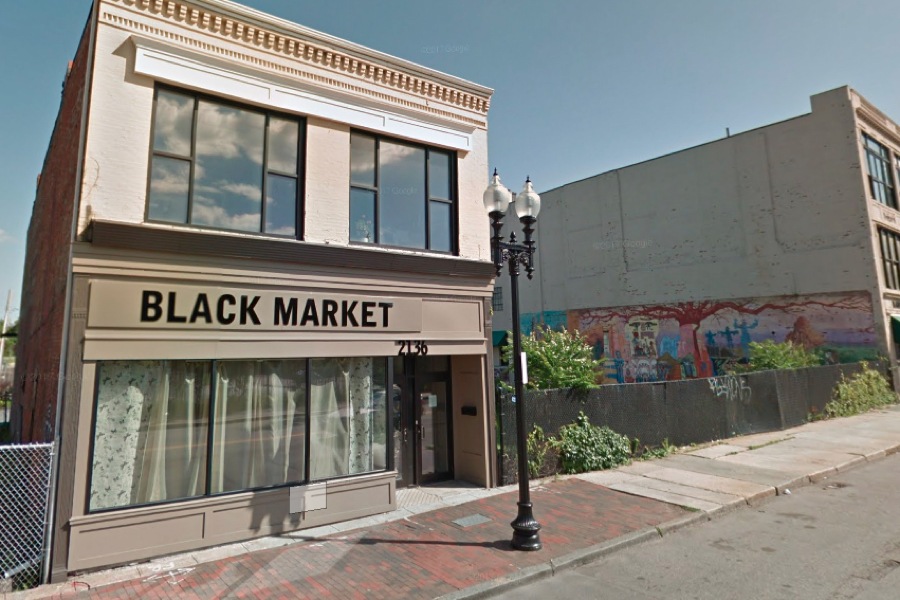 Kai Grant was ready for this. By the time vandals showed up at her Black Market in Dudley Square and scrawled “White Lives Matter” on one of its walls in spray paint, she’d had plenty of experience with those words, and the troubling point of view they represent.

She and her husband Christopher discovered the hateful graffitied message at their Roxbury market on Wednesday, just a few days before the seasonal marketplace is slated to reopen for the spring. It’s not clear how long it had been there (the culprit or culprits only had the courage to write their message out of sight, behind a fence, so it could have been there for weeks). The Boston Police Civl Rights Unit is now investigating.

Grant says she’s seen this kind of thing before: The phrase, along with its insidious cousin, “All Lives Matter,” has been used again and again by aggrieved white people over the past several years as a reaction to the Black Lives Matter movement and its increasing visibility in America. So in response on Wednesday, she and Christopher took to Facebook to give the phenomenon a name: “White privilege syndrome.”

In the widely shared post, they did not hold back, railing against festering hatred, systemic racism, and the “false equivalency” behind critiques of advocates for black business, or black lives. “We knew it was coming. We knew it was just a matter of time,” they wrote, adding, “WE WILL NOT BE SHAKEN.”

This isn’t the first time the Black Market, an explicitly Afrocentric pop-up venue that opened its doors in June of 2017, has attracted attention from aggrieved white people, Grant says. In July, after Mayor Marty Walsh gave the newly-opened venue a shout-out, trolls showed up in the Facebook comments to mouth off. “Looking forward to seeing a Eurocentric ‘White Market’ in the future!” wrote one of them. “Me too, just think of what a true White Eurocentric market would do for the economy!” wrote another (the comments have been removed, but Grant saved screenshots).

“There was a lot of negativity around the name,” she tells me. “It’s challenging for folks to understand going beyond race and not understanding why we’re doing what we’re doing.”

It’s her mission, Grant says, to provide opportunities to local entrepreneurs, and close Boston’s $247,500 black-white wage gap, while giving local entrepreneurs a first stepping stone to larger businesses of their own. She also sees it as a way to push back on the looming threat of gentrification and the impact it could have on the city’s longtime epicenter of the black community. So far, more than 150 artisans, clothing designers, and other businesspeople have sold their wares in the Black Market, which last season generated $400,000 in revenue.

Grant also notes that the market has white customers, as well as white vendors, and that if you consider country of origin, religious affiliation, and the age of her partners, it’s probably the most diverse marketplace in the city.

It wasn’t necessarily a surprise, Grant says, when she discovered someone had once again come after her project, simply because it aims to support black entrepreneurs. Except this time they came to do it in person. “There’s some passive aggressiveness here because they don’t want to have a conversation,” she says. But Grant does.

For those who still struggle to understand, she explains, black Bostonians often don’t have the same luxury as their white peers—like, say, descendants of Irish or Italian ancestors—when it comes to celebrating their heritage. “We take pride in our race versus having perhaps an ethnicity or a nationality to take pride in,” she says. “It has to do with the specialness of how Africans were transported and used as a commodity during the transatlantic slave trade. So therefore I don’t have a country that I can actually say I’m connected to. I have my melanin. I have my race. So I take pride in that.

“If I take pride in being black,” she continues, “why does that make someone else feel uncomfortable? Why do we even have to say ‘White Lives Matter?’ We already know that. That’s axiomatic. That’s self-evident. There’s a distinct difference when we are in a dire state in our community and we need to be able to have platforms that are safe and accepting and that are promoting our businesses in a culturally sensitive fashion, in a culturally competent fashion.”

Her vendors, meanwhile, aren’t deterred by the vandalism, and are very much looking forward to the market’s upcoming opening weekend, she says. “They’re excited. They’re not discouraged,” she says. “There’s nothing they can do that is going to hinder Black Market from moving forward.”

And as for that wall, which as of Thursday morning still sported a giant “WHITE” in black paint (the “lives matter,” written in smaller letters, had already been covered up), Grant says she’s thinking about commissioning a big, colorful mural for the space. She knows plenty of local artists who can do the job.