Construction on the Comm. Ave. bridge will affect scores of commuters who rely on the Green Line's B Branch and the Mass. Pike. 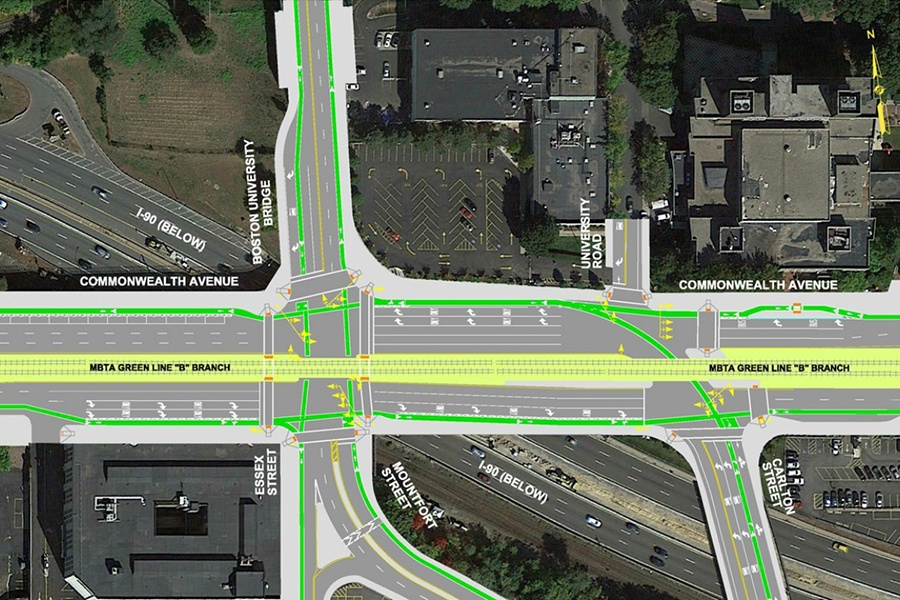 The BU Bridge and the portion of Comm. Ave. between Packard’s Corner and Kenmore Square will be closed from July 26 at 7 p.m. to August 11 at 5 a.m., resulting in “significant service impacts to all modes of transportation,” according to a press release from MassDOT. Shuttles will replace the B branch of the Green Line between the Babcock Street and Blandford Street stations beginning at 5 a.m. on July 27 and ending when regular access to Comm. Ave. resumes in August. MBTA bus route CT2 from Sullivan Square to the South End and route 47 from Cambridge to South Boston will be detoured for the duration of the roadwork.

A “dry-run” of the planned Mass. Pike lane closures will be conducted from 9 p.m. on June 1 to 5 a.m. on June 3, and the thoroughfare will be reduced to two lanes in each direction between the Allston Interchange and the Beacon Street Overpass.

Weekday service on the Framingham/ Worcester Commuter Rail line will not be affected, but trains will be replaced by shuttles in the construction zone on the weekends. The specifics for the bus diversions are still being worked out, MassDOT said in the press release. Buses will also replace the Amtrak’s Lake Shore Limited Line between South Station and Albany, New York, on the weekends of July 28 and August 4.

MassDOT has asked the Department of Conservation and Recreation to allow vehicular access to Memorial Drive in Cambridge on Sunday, July 29, and Sunday, August 5, according to the press release.

Well, until this summer.

Shuttle buses will replace T service between the Babcock and Blandford street stops for more than two weeks while construction is underway on the Comm. Ave. Bridge. The thoroughfare will be closed to vehicular traffic between Packard’s Corner and Kenmore Square for 15.5 days this year, and the Boston University Bridge will also be out of commission.

On Monday, MassDOT will announce specific construction dates, which amount to the latest chapter in the Commonwealth Avenue Bridge Replacement Project, according to the Boston Globe. The $110 million initiative aims to replace deteriorating features of the structure that carries Comm. Ave over the Mass Pike, which was built in 1965 and has since suffered from corrosion.

This summer’s construction will focus on the westbound side of Comm. Ave., following last year’s work on the eastbound section of the bridge. The 2017 closures, which stretched 19 days from the end of July to the beginning of August, resulted in a mess of traffic congestion on the Mass. Pike and tremendous headaches for commuters.

This time around, Comm. Ave will remain open to pedestrians, bicyclists, and MBTA buses, and access to the BU Bridge will be restricted to pedestrians and bicyclists, according to the MassDOT website. For 9.5 days, the Mass Pike will be reduced to 1 or 2 lanes in both directions between the Allston Interchange and the Beacon Street Overpass; and the Mass. Pike eastbound on-ramp from Cambridge Street/ Soldiers Field Road will be out of commission for the entire time construction is underway. The Exit 20 off-ramp to Brighton/Cambridge/Storrow Drive will also be closed at some points during the work period, according to the MassDOT website.