How a younger breed of birdwatchers is giving the timeless hobby an urban makeover. By Jenny Rollins. 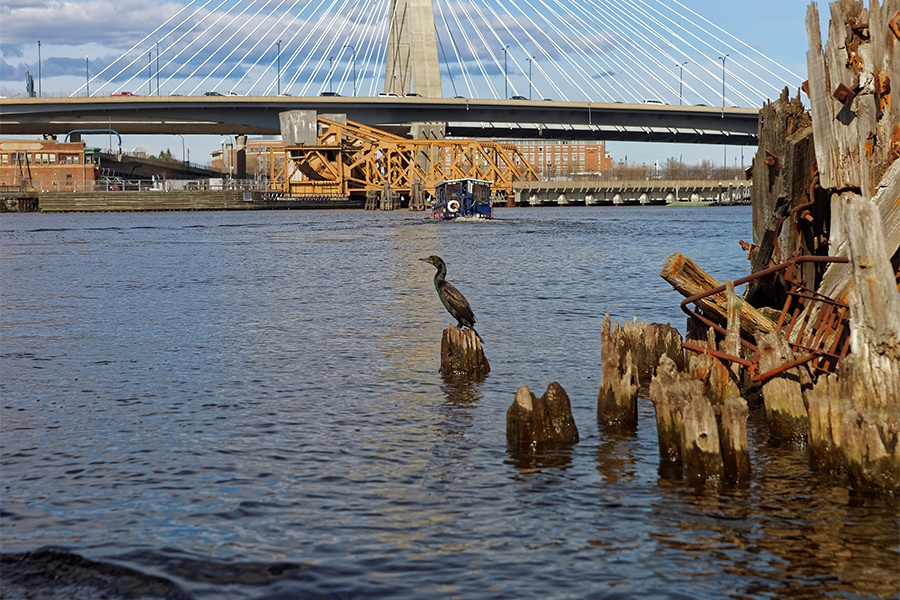 It’s a damp, gray morning in Cambridge’s Mount Auburn cemetery, and 34-year-old Evan Crockett is standing still among the tombstones. Every few minutes, he peers toward the treetops through a set of binoculars. He listens attentively for chirps and squawks, inspects white streaks of poop on the trunks of trees, and keeps his eyes toward the sky.

Birdwatching has long been the type of low-impact activity that appeals to retired senior citizens with nothing but free time. But Crockett is among a younger breed of birders who are giving the popular pastime a millennial makeover. They carve out time in their jammed schedules to venture away from the office and into nature. Rather than using printed reference tomes to confirm their sightings, they tap open a smartphone app and then post stunning images from the field on Instagram. And they don’t passively wait for the birds to arrive in their backyard; they head out in search of specific species as if they’re on a feather-filled treasure hunt.

With spring arriving, they’ll soon be fanning out across the city, and the country. The hobby has in fact become so popular among urban 20- and 30-somethings that Conde Nast Traveler called birding one of the biggest (and most unlikely) international trends of last year.

Boston, with its young, affluent, and highly educated workforce, appears ripe for millennial birders. Often, they are overworked and looking for a way to reconnect with wilderness. “It’s kind of a nostalgia thing,” says Crockett, who first began spotting birds with his father. “But it’s also a good way to get out into nature and just experience the outside world when you have a crazy schedule.”

For day trips, Crockett and friends head to places like Mount Auburn Cemetery, the Blue Hills, Cape Cod, and Plum Island. Thanks to Boston’s growing population of raptors, including red-tail hawks and peregrine falcons (the fastest animal in the world), they don’t even have to leave city limits to glimpse a predator in action.

And unlike SCUBA diving or mountaineering, birding can be done just about anywhere with little to no special equipment. As such, some of Boston’s young birders have glimpsed rare species while halfway around the world on unrelated business. Take Isaiah Tharan, a senior at Boston University. While recently studying abroad in Tanzania, Tharan was waiting at an airport near Ngorongoro Crater when he looked across a swampy expanse and saw a shoebill—a prehistoric-looking creature that Audubon once dubbed “the most terrifying bird in the world” and which Twitter has recently been enjoying.

Tharan couldn’t believe his eyes. “I was definitely freaking out in my mind,” he says, “but birds are skittish,” and so he contained his excitement and stayed still and silent, soaking in the moment. Then the beast lifted its gigantic beak, stretched out its seven-foot wingspan, and took to the sky.

Others derive a totally different sense of satisfaction from venturing out in search of birds. Lauren Höbler, a 27-year-old musician who works at the New England Conservatory, grew up in the Hudson Valley, where she would wake up early just to listen to birdsongs from the gardens outside her window. “It was like a symphony,” she says. As a young girl, she sat at her piano trying to recreate the bird calls. Years later, while studying theology in college, she began creating bird-inspired sculptures, poems, photography—and ultimately recorded a collection of sonnets dedicated to nature. Now she and her wife often spend their weekends on day-long hikes throughout the region in search of birds.

As for birding’s growing appeal among a younger generation, Höbler isn’t surprised. “Being young in a city, it’s really hard to find community,” she says. “For us, birding has been that community.”

Back at Mount Auburn Cemetery, Crockett calls it a day after four hours. Before leaving, he takes out a small notebook and writes down bird species he spotted. There’s the downy woodpecker, blue jays, a white-breasted nuthatch, a junco, the black-capped chickadee—Massachusetts’ beloved state bird—and an adorable little creature called a tufted titmouse.