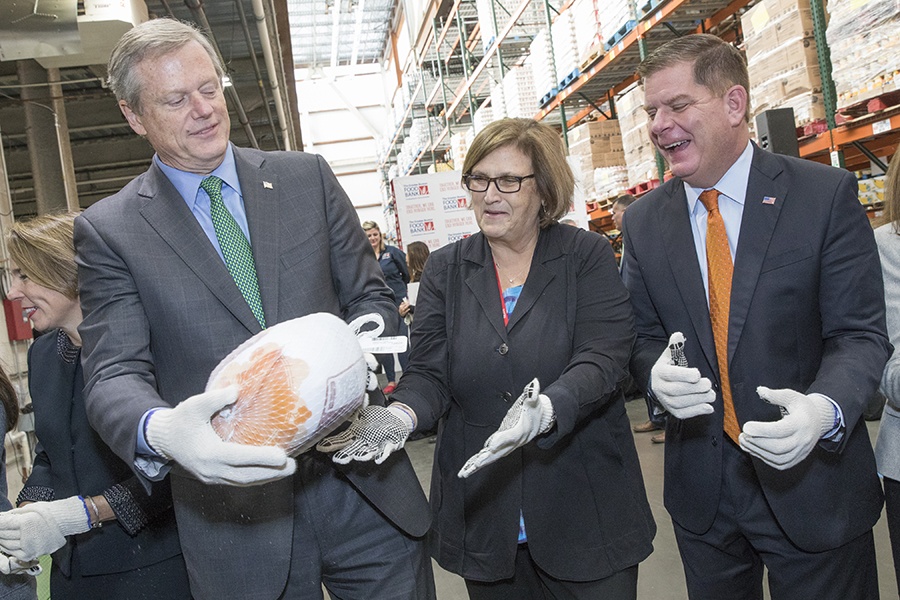 Photo by Nicolaus Czarnecki for the Greater Boston Food Bank

What’s it like to have one of the coolest jobs in Boston? We want to know. So we’re tracking down the city’s most interesting employees and asking them the questions that need answering. Have a suggestion? Send us a tip to editor@bostonmagazine.com.

Hunger cost Massachusetts $2.4 billion in 2016. Hunger makes it hard to focus at school. It makes it tough to stay calm at work, and it makes it a whole lot harder to reach your full potential. But the Greater Boston Food Bank is trying to change that. The nonprofit, led by its president and CEO Catherine D’Amato, distributed more than 50 million healthy meals last year to 190 towns and cities across eastern Massachusetts—and it’s not stopping there. We talked to D’Amato about why she believes hunger is a solvable problem, how she found herself singing the National Anthem at Fenway Park, and more.

I took the job in 1995 to come to the Greater Boston Food Bank. Prior to that, I was serving as the executive director of the Food Bank of Western Massachusetts. I was in the interview process and wanted to go back to a bigger food bank—I had started in San Francisco at the food bank in the late ’70s—so I was ready to go.

How did you develop a passion for ending hunger?

My parents were working class—my father was a Teamster, he drove a bread truck, he was an in-town laborer—and when I was 8 years old, they opened a restaurant. It was opening that restaurant that moved the family from working class to middle class. And we were always taught that if anyone came to the back door of the restaurant to beg for food in exchange for work, we were to feed them. And they were treated with dignity and respect and brought into the front of the restaurant and sat down, and they were fed. So that’s an impression that stayed with me, and my consciousness much later was able to connect that when I went to study theology, human rights, and social justice at the University of San Francisco.

I really fell backwards into what I know today as food banking by working as a church secretary and running a little, tiny food cupboard in a church down off of Sacramento Avenue in San Francisco. But at that point, I learned that there were many of these little food cupboards, so we organized and created the much more robust food pantry program, and from there we learned about this thing called food banking, where pantries get their food. And that led me to start the San Francisco Food Bank in 1979. It was not my choice! I didn’t wake up and say ‘Hey I want to be a food banker one day!’

What is the best part of your job?

The best part of my job is advancing the mission. We have 120 employees and team members at the Greater Boston Food Bank, and they all come to work because of the mission. When we can help someone or create the opportunity for them to be more stable in their access to food or increase their food security, or feed their kids so that they can really be concerned and care for them in different ways because the food supply is maintained, that’s a pretty good feeling. Because if they have the fuel, they can do so many more things. … You may never meet them, you may never know them at all, but we do know that we’ve made a difference.

Do you foresee the problem being solved soon?

I’ve been in food banking and domestic hunger relief for a long time, and hunger always demonstrates three things: It’s always economical. It’s always political. And it’s always personal. And it can be any one of those three, but we don’t control the political decisions … Some politicians make a decision to change the food stamp program, that means there will be more children and families who won’t go hungry. I don’t control that, but I have to respond to it. When you ask me, do I think it’s solvable? Yes. Does it require political will and public will to solve it? Absolutely. And those don’t always align at the same time. … But what is important is that people are working to increase food security so that families have regular access to healthy foods.

What is the strangest thing that’s ever happened on the job?

I never planned to be a food banker. I always thought I’d be a singer or a songwriter, and I studied a lot to do that. And I still love it, and I love my avocation of it. One of the strangest things was combining those, and singing the National Anthem at the Red Sox game for about 10 years in a row. … That had to do with the partnership the food bank has with the Red Sox wives, who do a fundraiser once a year. What I would do in coming to receive the check—you know they have a ceremonial check—I would sing at that game. It’s just fun because it’s two things that I really love. It’s noteworthy to say, “I sang before 36,000 people.” People are like, “You did?” and I’m like, “Yeah I did, and I really like the night game better than the day game.”

What makes you hopeful for the future?

I’m going to stay focused on the fact that hunger is a solvable problem and that our energy and intention needs to be converted to actual outcomes that cause and affect change for families to access healthy, better food. I believe very strongly that we have to move people from hunger to health, and when they are healthier, they’re able to do more, be more, and give more to the communities that they live and work in. Being able to move people from the dependency or the actuality that they don’t have the resources to getting them the fresh, healthier foods so that they can thrive in their communities—that’s what I’m hopeful about because I can see it. I think making food insecurity a matter of public health has begun.