The president wrote on Twitter that the former Massachusetts senator may have engaged in "illegal Shadow Diplomacy" in an effort to preserve the agreement. 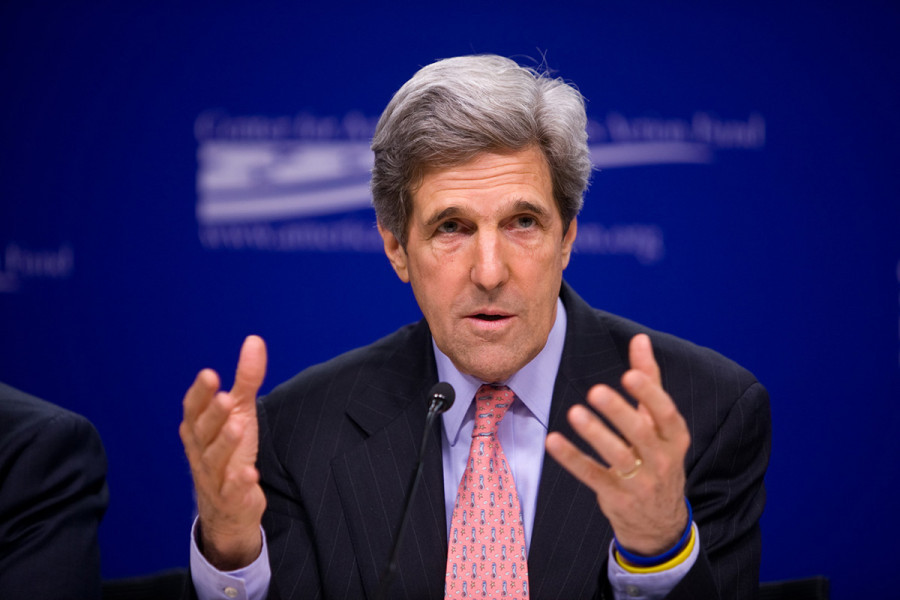 John Kerry is batting third behind Elizabeth Warren and Mitt Romney on the baseball team made up of New England politicians President Donald Trump doesn’t like.

On Monday morning, the president tweeted that “the United States does not need John Kerry’s possibly illegal Shadow Diplomacy on the very badly negotiated Iran Deal. [Kerry] was the one that created this MESS in the first place!”

The United States does not need John Kerry’s possibly illegal Shadow Diplomacy on the very badly negotiated Iran Deal. He was the one that created this MESS in the first place!

Trump has been lambasting the agreement—which eases economic sanctions against Iran in return for limits on the country’s ability to develop nuclear weapons—for months, and moved to “decertify” the pact back in October. The president has repeatedly called Kerry’s negotiating skills into question within the context of the deal, which stands as one of the former Massachusetts senator’s signature accomplishments as secretary of state.

According to the Boston Globe, Kerry has been working behind the scenes for the last few months to keep the Trump administration from ending the agreement. The former top U.S. diplomat has been in contact with leaders from Iran, France, Germany, and the European Union to preserve the deal, the Globe reports.

In a statement to the Globe following Trump’s tweet, Matt Summers, a Kerry spokesman, defended the former senator’s actions and attempts to preserve peace:

I think every American would want every voice possible urging Iran to remain in compliance with the nuclear agreement that prevented a war. Secretary Kerry stays in touch with his former counterparts around the world just like every previous Secretary of State. Like America’s closest allies, he believes it is important that the nuclear agreement, which took the world years to negotiate, remain effective as countries focus on stability in the region.

This is far from the first time Trump has turned to Twitter to criticize Kerry’s role in the Iran nuclear deal. Back in November 2013, long before he had the 1600 Pennsylvania Ave. address, Trump referred to the deal as “tenuous” and said, referring to Kerry, “great dealmakers do not celebrate deals, they just go on to the next one.” And in July 2014, the future president wrote that “negotiation is just not [Kerry’s] thing.”

Trump has until May 12 to decide if he will pull out of the Iran nuclear deal.