Maura Healey Is “Deeply Troubled” by Allegations against Eric Schneiderman, Her Former Ally

The two have collaborated on major legal battles. 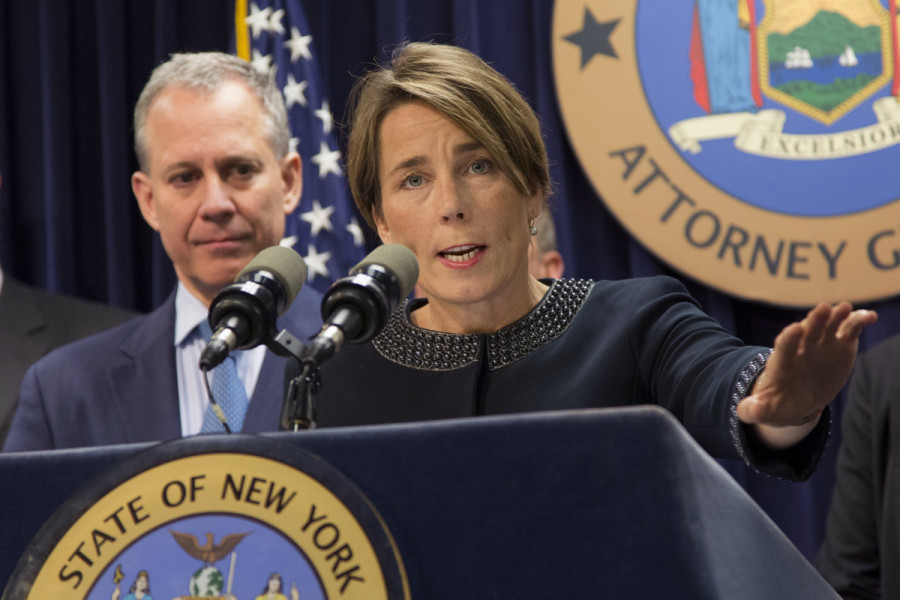 Massachusetts Attorney General Maura Healey says she is “deeply disturbed” by the allegations against New York AG Eric Schneiderman, who before the release of bombshell allegations Monday had been a prominent anti-Trump force and Healey ally.

“I was deeply troubled tonight to learn of the disturbing allegations made against Eric Schneiderman, and I support his decision to resign from office,” Healey said in a statement released about an hour after Schneiderman announced he would resign.

New York’s top law enforcement official has been accused by four women of serial abuse. The women, two of whom decided to make their names public, alleged in the New Yorker that Schneiderman hit, berated, threatened, and exhibited controlling behavior during their relationships. They also described him as a vicious drinker and a power-mad official who once allegedly said to one former partner, memorably, “I am the law.”

He and Healey had collaborated on several major legal battles, joining forces in against the Trump administration and the oil giant Exxon Mobil.

“My heart goes out to the women who bravely came forward to share their stories, and my hope is that each of these stories helps to change our culture of violence against women,” Healey said in her statement. “The women and men who serve in the New York Attorney General’s Office work every day to enforce the law and protect the rights of all Americans. I look forward to working with the next Attorney General of New York to continue that important work.”

I was deeply troubled tonight to learn of the disturbing allegations made against Eric Schneiderman, and I support his decision to resign from office. pic.twitter.com/luqSPBUbZ9