The blogger king of Boston has the goods on the city's every helicopter sighting, bar brawl, and MBTA catastrophe. Sometimes, he sleeps. 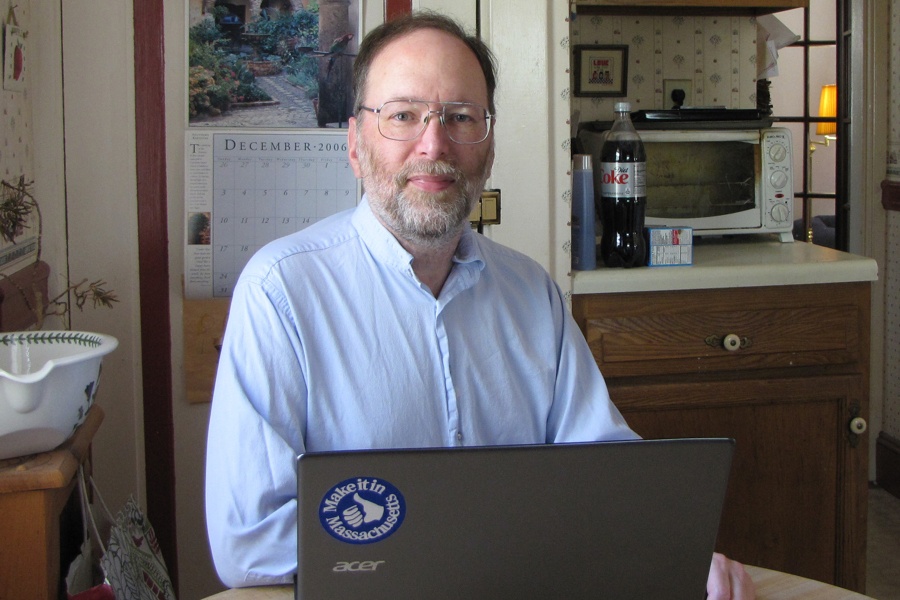 It’s not easy running Boston’s blog-of-record. But that’s exactly what Adam Gaffin, the 59-year-old creator and headline aficionado behind UniversalHub does on what appears to be a 24/7 basis. A self-described “recovering Brooklynite,” the Roslindale resident has lived in Boston since 1981 and has filled his site with news and discussions, often at the hyperlocal level, since 2005. On the side, he offers website consulting to start-ups and media companies, and he also runs one of the city’s best-known Twitter accounts, the followers of which ping him constantly with observations, questions, photos of missing animals, and—a UniversalHub staple—sightings of helicopters. So what’s it like to be the most-tweeted-at man in Boston? Gaffin explains.

What is your job right now? How do you see it?

I chronicle as much of the interesting, quirky stuff in Boston that I can find (plus the latest turkey and Keytar Bear sightings), along with sadder stuff like crimes and fires, and stuff like what the city and state are up to that affects our lives (right down to zoning decisions). I try to find stuff that the mainstream media normally wouldn’t cover, but which could be interesting or which are really, really important to groups that are too small for the Globe to write about (sure, anybody can write about the $1-billion Winthrop Square tower—me included—but what about the 29 single-family homes one developer wants to put on a piece of land in West Roxbury?).

How did you end up doing this?

Getting laid off kind of forces you to figure out what to do with your life. I’d been running Universal Hub and similar sites as a hobby for awhile. When I got laid off as an editor at a tech trade publication in 2009, I decided to try to do something I really liked (covering a city) fulltime.

What’s your daily routine? Are there specific hours you’re on and off the clock?

Wake up. Check Twitter, email and Facebook to see if anything interesting happened overnight—or if the T is in meltdown mode. If it’s a Tuesday, I’ll go to the city licensing board for the “violation” hearings that rarely get covered, but which often mean interesting stories (one of the best, or worst: The guy who got into a fight at a South Boston bar and bit off his opponent’s lower lip, then swallowed it). Zoning hearings are the same time, but fortunately, the city videos those, so I can watch them later (video is also how I mostly cover the city council). Cover occasional neighborhood meetings/political forums at night.

Don’t ask my wife about my hours! My main form of exercising is riding an exercise bike—with my laptop perched on it and while listening to the police scanner (with earbuds at least).

Always learning new stuff about Boston and seeing all the bizarre stuff that goes on around here. Even aside from breaking news, there’s so much history to Boston besides the Revolutionary stuff that is worth reading/writing about, and we’ve got no end of people doing quirky things. The people who send me photos and news are great as well.

Sort of feeling like being on call all the time —hearing a helicopter overhead and wondering what’s up. It can be pretty bad. I like taking walks around Jamaica Pond—it’s pretty peaceful and calming. One day, I heard and saw a helicopter move towards Roxbury, and then it just started circling. I had to get out my phone and see what was going on (a shooting). And the making money part. Some people are very good at selling advertising. I’m not one of them.

What’s a piece of advice that has stuck with you?

Do you have a favorite story/headline you’ve published?

3 guys just stole 4 bars of soap from the CVS at 285 Columbus. They split up and made a clean getaway #southend

On a local level, at least, it’s great—it’s a way for people to find out why there’s an ominous column of smoke rising over Somerville or what the hell’s wrong with the Red Line now. People see or hear something and wonder what’s up and they tweet about it, maybe even take a photo. And so many times, a story develops from that as other people fill in details on what’s going on. It’s journalism as a conversation, often in real time, and it’s something that just wasn’t possible back in the old days (I’m old enough that at my first daily journalism job, the newsroom still had a working teletype machine, for sports results). Unfortunately, we are starting to see some local trolls spring up—I feel badly when somebody asks me to retweet a question about something, and an ass responds.

How do you keep up with all your notifications? How many would you say you get in a day?

Fortunately, there are tools for turning notifications into a sort of wire feed that you can scan rather than having to read every single item that comes in. I get headlines from various sites via something called an RSS reader that looks a lot like an email inbox (or an old-fashioned wire feed) and Twitter itself is a kind of list of headlines (but you need something like TweetDeck to organize it all into particular topics, such as, oh, #mbta). No clue how many items I at least glance at, but it’s lots and lots.

Have you ever tweeted/retweeted/blogged about something you later regretted?

Yep. Probably the worst was early on when I was listening to the scanner and heard BPD officers responding to a bizarre gun incident at Copley Plaza —a fashionably dressed woman showed a gun or something, then fled. Turned out it was a training exercise, which I found out when BPD responded to one of my tweets. So, yeah, you have to be careful before tweeting something. Being online means you can correct something quickly, but the problem with Twitter in particular is sometimes people will see your incorrect tweet and not your correction.

Why do you do the rhyming headlines for MBTA failures?

How many times can you say a train’s dead? Gets kind of boring after awhile. In fact, at first, I tried finding different synonyms for “dead” or “dying,” but there are only so many ways to say a train has left this mortal coil or breathed its last or flatlined or was taken out back and shot.  At least with rhyming, there are a lot of potentially novel ways to tell people to just give up on the Red Line right now, although it is getting harder and harder to come up with new rhymes.

What’s one bygone aspect of Boston you really miss?

I don’t miss it from personal experience (wasn’t even alive for it), but I would have loved to have seen the West End before it all went away.