Spotted on the MBTA: Spider-Man

The web-slinger hung from a railing, checked his phone. 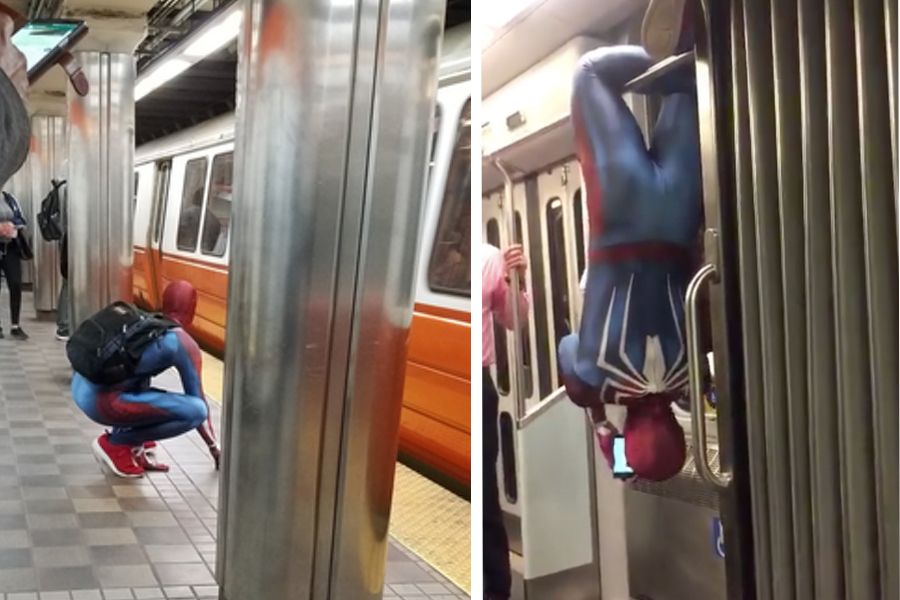 You ride the MBTA long enough, you’re going to see some characters. And on Wednesday, that character was your friendly neighborhood Spider-Man.

According to multiple accounts on social media, the web-slinger was seen commuting around the city during the evening commute.

In one video, posted to Twitter around 4:30, he can be seen effortlessly dangling upside down from a railing on a Green Line D train while scrolling through a smartphone. “Just another day on the #MBTA” wrote T-rider Ashley Armstrong. A Reddit user captured evidence of the hero hanging out on the Orange Line, too.

Just another day on the #MBTA. pic.twitter.com/

The crime-fighting comic book hero was then spotted two hours later crouching on the platform at Downtown Crossing waiting for the Orange Line to Forest Hills, while wearing stylish red running shoes and sporting a black backpack.

Who, exactly, was it behind the mask? No one seems to know (If you’re out there, Spidey, send me an email).

There have been quite a few sightings of characters from the Spider-Man franchise on the T in recent weeks, and at least one dating back as far as 2015. It’s unknown if they’re related.

Today, I have no complaints about the @mbta. Spotted on the Orange line. Spiderman. pic.twitter.com/KtqSB4Naok

So is Boston protected from from the villainy of Sandman and Mysterio? I think we can say that we are.

For his part, fellow costumed T-rider Pup Wilshire (the public transit and sex-positivity activist we interviewed last month), said on Twitter he thinks the Spidey sightings are more proof that “taking the @MBTA can be fun.” That it can.

Update: Spidey has been unmasked. Want to know who he is? Patch’s Jenna Fischer talked to the man himself.