Why Is Boston Common So… Common?

Virtually unchanged since the days of Paul Revere, America’s oldest park isn’t living up to its potential. Will the city finally bring it back to life? 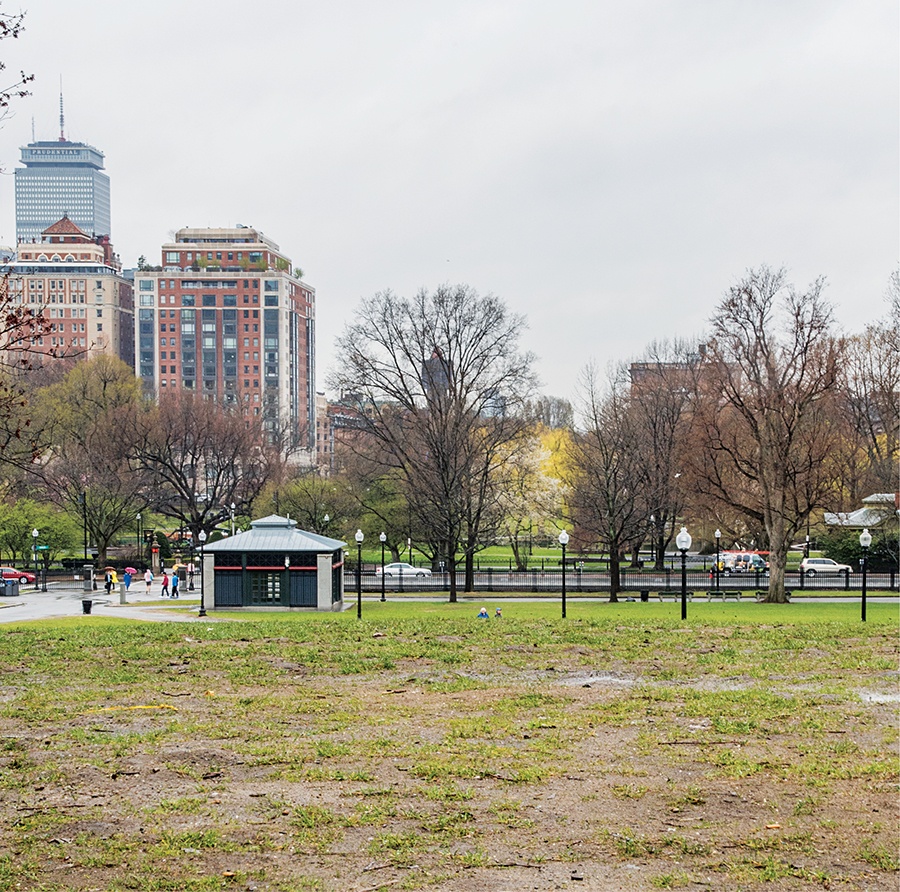 It’s a clear, cool morning in early spring and I’m strolling through Boston Common, hoping not to step in a fresh pile of dog poop. In every direction, it’s hard to miss the evidence that the park is struggling to live up to its potential. The curbs are battered and sagging, the grass is mottled with muddy footprints, the trees are riddled with rat burrows, and there’s a vast, soggy emptiness in the northwest corner that appears to be the well-known, well-used, unofficial bathroom for the beloved canines of Beacon Hill. I am hardly the first visitor to notice the sad state of affairs in Boston’s most famous and heralded park, which has long been one of our city’s biggest tourist draws. Until, that is, the tourists get there. A TripAdvisor review recently quipped, “There is nothing special about the Boston Common.” Another summed it up in three dismal words: “Historic but disappointing.”

It’s not for lack of trying that today’s Common feels underwhelming. For decades, the nonprofit advocacy group Friends of the Public Garden and the Parks Department have worked hand in hand to maintain the space—and anyone who can remember what it was like during the 1960s and ’70s will agree that it has come a long way. Still, except for the carousel and some much-needed renovations near Park Street station and the visitor center, the Common hasn’t really changed in style or substance since our founding fathers’ cows chewed cud along it. “If Benjamin Franklin came back today,” says Elizabeth Vizza, executive director of Friends of the Public Garden, “he would recognize it.” Despite Vizza and company’s tireless work to breathe new life into the Common, money and manpower have always been limited. That’s about to change, though: A deal struck with the developers of the upcoming Winthrop Square Tower project will soon direct millions of dollars to the Common in exchange for casting a hotly debated shadow across the park at certain times of the year. It’s the type of cash that could allow for a radical transformation of America’s oldest park.

Imagine, for a moment, a Boston Common with a beer garden, al fresco dining, bocce courts, an expanded modern playground, new shaded plazas, and a constantly updated slate of provocative public art. Picture all those rush-hour cyclists corralled in designated bike lanes, and a real, honest-to-goodness dog park with fences and signs. With the right attitude, we could get there. The good news is that the officials in charge are thinking big. “This isn’t just a tourist destination anymore. We’re now in a position where it also has to function as a major urban park,” says Christopher Cook, commissioner of the Boston Parks and Recreation Department. He calls the forthcoming infusion of money a “once-in-a-generation opportunity” and says he isn’t taking any ideas for how to invest it off the table. When I half-jokingly suggest a London Eye–style Ferris wheel in the middle of the Common, Cook doesn’t blink. “I don’t think it should be dismissed out of hand,” he tells me. “In order to be relevant, you have to innovate and evolve.”

Still, that’s easier said than done, especially in Boston, a city that clings to its past like a family heirloom. “It’s one of the most—if not the most—important spaces in Boston,” says John Copley, the famed landscape architect who restored the Common’s Frog Pond and Tadpole Playground. “When you have that mantle, you have to be very careful about any improvements.”

Copley’s points are well taken—the park is important, and we shouldn’t rush to greenlight the first shovel-ready project just because it sounds cool. At the same time, we needn’t shy away from taking bold steps to turn the Common into a more celebrated outdoor destination. After all, green spaces designed with vision are flourishing around the city, from the lushly landscaped East Boston Greenway to the whimsical Martin’s Park that’s being built in the Seaport District. To leave the Common as is, toilet to every Beacon Hill beagle, would cheat the rest of us out of one of the best plots of real estate in town. After all, this is no longer Ben Franklin’s park. It’s ours.