The group has filed an official complaint with the state. 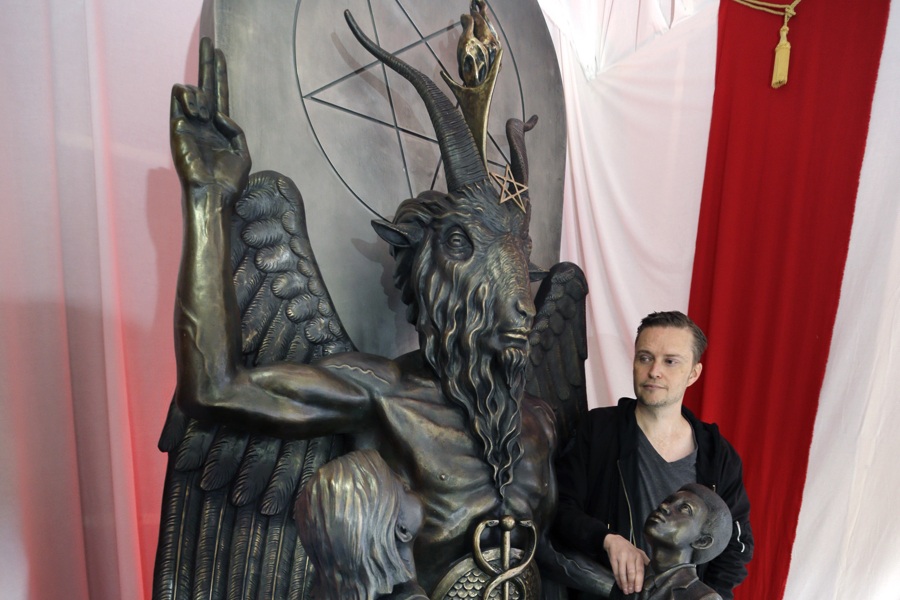 Arguing that it has been a victim of religious discrimination, the Massachusetts-based Satanic Temple has filed an official complaint with the state against Twitter, the group announced Wednesday.

The Temple, which set up an international headquarters in Salem in 2016, says the social media company did not respond adequately after a Twitter user threatened to burn its building down. It also accuses the company of inappropriately suspending two accounts run by its spokesman, and alleges it declined to “verify” those accounts on religious grounds.

“Twitter claims to be welcoming to people of all religions; it may welcome some, but it detests The Satanic Temple,” reads the complaint, which was signed on March 5 and marked received on March 12. A spokeswoman for the Temple says it is sharing the news now because it has only just received confirmation that the complaint has been received.

The complaint points to an incident in January, when a user on the site wrote a hostile message directed at the group. “A church like this should not exist!” reads the tweet,  posted by an account that has since been suspended. “Burn it!” The tweet gained traction after the former child actor Corey Feldman shared it, the Temple says. At the time, Lucien Greaves, the Temple’s co-founder and spokesman, reported the tweet to Twitter, but says the company instead suspended his accounts “without explanation.” Three days later, after the Temple threatened to sue, Twitter reversed its decision and the accounts were restored. 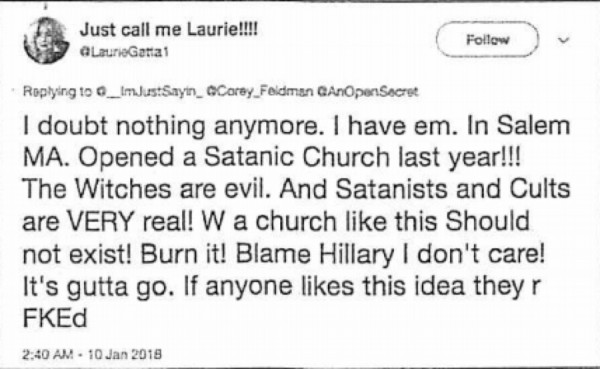 Screenshot via the Satanic Temple’s complaint

“Instead of taking swift action against the arsonist and her god-fearing champion,” the complaint continues, “Twitter suspended accounts that innocently spread the word of Satanism, doubling down after they complained of discrimination. The Satanic Temple brings this claim of discrimination and retaliation to stand up for the rights of religious minorities.”

Greaves alleges that he has tried unsuccessfully since November to get verified status from Twitter, which is denoted by a blue checkmark next to a user’s name and is designed to both confirm an account owner’s identity and confer elite status. The Temple’s complaint notes that other religious figures like Pope Francis and the Dalai Lama have been verified. Greaves has about 10,000 followers on the platform, and the Temple’s official account has about 29,000.

“The failure of Twitter to verify both accounts, which both clearly meet Twitter’s documented standards for verification, compounded by the suspension of the accounts clearly demonstrates a pattern of hostile discriminatory behavior engaged in by Twitter against The Satanic Temple,” Greaves says in a statement. “It reveals the biased human agency behind a facade of neutral and evenly enforced standards.”

The Temple is also seeking damages and attorneys’ fees.

Through a spokesperson, Twitter tells Boston it will not comment on individual accounts. The Massachusetts Commission Against Discrimination confirmed that it is “actively investigating” the complaint, but declined to comment further.

Followers of the Satanic Temple claim they do not literally worship the Antichrist, and say that its use of Satanic imagery is meant to symbolize a fight against tyranny and in support of other values, such as “benevolence and empathy among all people,” according to its website.

It’s not uncommon for chapters of the Satanic Temple to assert their rights in public, often confrontational, ways. The Temple once campaigned to erect a large bronze statue of Baphomet, a Satanic goat-headed creature, next to a monument of the biblical Ten Commandments on Oklahoma’s Capitol grounds, and it joined a lawsuit filed by the ACLU to remove a similar Ten Commandments monument in Arkansas. It has protested the notorious Westboro Baptist Church in some, um, creative ways. In 2015, the Temple planned to hold a “black mass” at Harvard, inspiring a rebuke from the Archdiocese of Boston. The controversial event was abruptly canceled.