The rare specimen was found at Roche Bros. 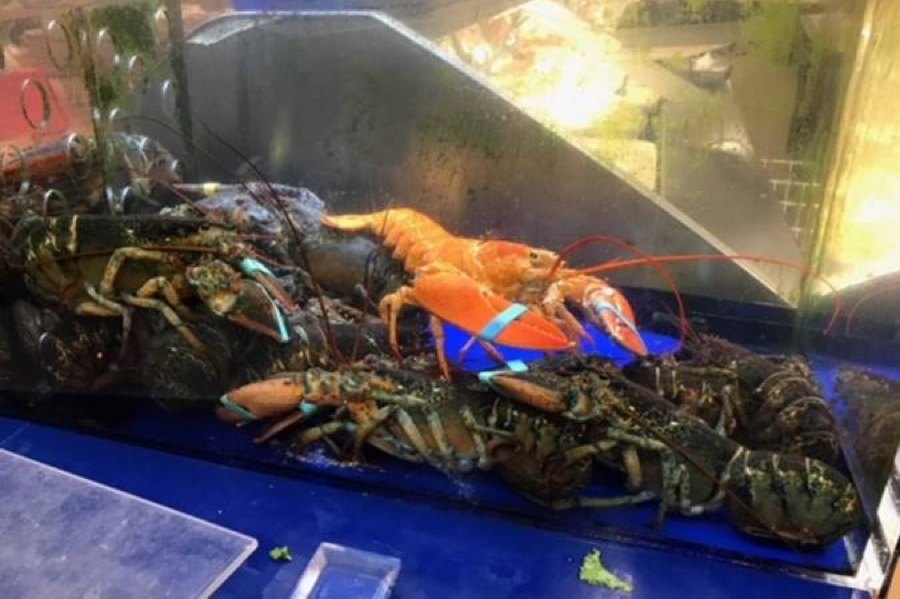 An incredibly rare orange lobster will be spared the fate of becoming dinner and will be donated to the New England Aquarium after it was discovered at a local grocery store.

Hailing from Cape Breton Island in Nova Scotia, the brightly hued specimen was spotted in a shipment at Roche Bros. in Westborough, the aquarium said in a release. It’s an unusual find—the orange coloring occurs in only one in 30 million lobsters, according to the Lobster Institute at the University of Maine.

It takes a particular kind of crustacean to last with such a strange color scheme, and this one must have stuck out like a pumpkin-colored thumb. “This lobster is most likely in the 7-9-year-old range, and he is a wily character to have reached that age given his day-glo appearance in the briny, dark depths of the north Atlantic. With that color, he is flashing a neon sign to many large fish predators, so he deserves much credit to have survived,” the aquarium says.

Once it makes its way to the aquarium, it will join an existing collection of rare colored lobsters after a month-long quarantine period. It may be displayed here, or may be sent to an exhibit in Japan.

Lobsters on our plates are bright red, but in nature they’re dark and brownish-greenish-gray. About 300 million lobsters are caught annually in New England and eastern Canada, so there are plenty of opportunities for anomalies to show up every year. There are a number of rare color variations for lobsters: blue (one in 2 million), red (one in 10 million), or yellow or calico (one in 30 million). Rarer still are split-colored lobsters, in which case the animal has two distinct colors (one in 50 million). One of those was discovered in Maine in 2015. Back in 2013, a fisherman in Gloucester discovered a lobster that, thanks to its orange-and-black coloring looked a lot like the Star Wars villain Darth Maul. The Holy Grail of colorful crustaceans, though? The albino, or “crystal” lobster, which is believed to occur only once per 100 million.