I Love My Job: Making Lightning at the Museum of Science

Jeannine Madrid has been wowing visitors at the Theater of Electricity for 20 years. 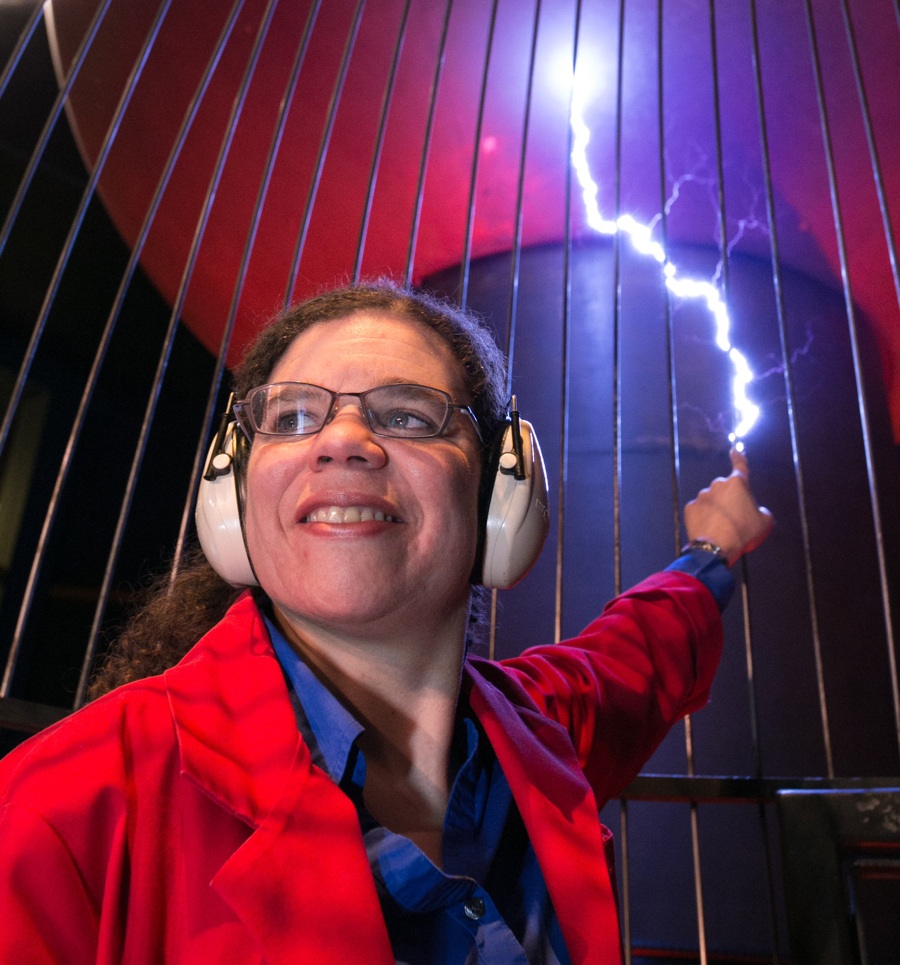 What’s it like to have one of the coolest jobs in Boston? We want to know. So we’re tracking down the city’s most interesting people and asking them the questions that need answering. Have a suggestion? Send us a tip to [email protected].

There’s plenty of fun and educational stuff at Boston’s Museum of Science, whether your thing is IMAX movies, stargazing, crocodiles, or any if the other activities and exhibits currently at the nearly 200-year-old institution. None of it, though, packs a punch quite like the Theater of Electricity, where visitors get an indoor, up-close look at one of the most mysterious forces of nature, in all its bright, ear-splitting glory. A few times a day, educators at the museum take the stage to showcase crackling electrical doodads, teach you how to survive a thunderstorm, and, for the grand finale, climb into a giant metal birdcage that is zapped again and again with giant bolts of what looks like actual lightning.

For the last 20 years, Jeannine Madrid has been behind the controls of this unique spectacle. “I make lightning for a living,” she tells me. As Senior Education Associate at the museum, Madrid is one of 15 educators trained to use the high-powered technology, and she stars in Lightning! shows several times a week. The centerpiece of the exhibit is an ancient and powerful machine called a Van de Graaff generator, a pair of 40-foot-tall metal Q-tips joined at the top that are capable of spewing millions of volts of electricity. Built in 1931 by MIT Professor Dr. Robert J. Van de Graaff, it remains the largest of its kind in the world. It’s extremely loud, and it’s fascinating.

So how does one become a human Zeus? Is it scary to work with lethal lightning blasts all day? We wanted to know.

First of all, what exactly do you do at the museum?

I’m an educator here at the museum, which means I’m learning science all the time and translating it to people through demonstrations and performance. I also maintain the equipment in there. It’s a very technical space. We’ve got high voltage equipment and we have to keep everybody safe. So I’m part of that team. I also train staff and make sure everyone knows what they’re doing in there.

How did you end up doing this?

I was a geology major as an undergrad. One of the things about geology—studying the earth—is that you get to study all kinds of sciences. I studied chemistry, physics, biology, I went on dinosaur digs. I was really interested in paleontology for a long time. I spent a lot of time telling everyone what I was studying and that kind of clued me in that maybe I didn’t want to be a researcher so much as being a person who shared science with people. Eventually I found my way to the museum and I love it here.

What’s the training process for becoming a lightning tamer like?

It’s so fun. I compare it to learning how to drive a car. There are pieces of equipment in there that if you don’t use it properly, or you aren’t aware of what’s going on, you could hurt yourself or someone else. We take people through about 8 weeks of training where they just learn how to run the pieces of equipment, how to turn things on and turn things off very quickly. There are a lot of safety emergency stops and things.

Then, when you push the button, how does it work? We spend a lot of time talking and teaching about one of the fundamental forces in the universe. Most people have an idea about electricity, but it’s a hard concept because it’s all invisible for the most part. It’s a force you can’t see, you can’t touch, but we use demonstrations to make sure we’re painting a memorable picture of what this force is.

People don’t realize it is a scientific tool. It smashed the atom in 1930, and Dr. Van de Graaf used it in his research all throughout the 1930s until there were easier ways to smash atoms. It’s also an amazing teaching tool. It produces lightning bolts that are up to 20 feet long. And I get to hurl the lightning bolts around.

Have you ever been electrocuted?

No. We do things in a very safe way at the museum. The high voltage equipment can kill you. Electrocution would not be the way I’d want to go home. So we’re very careful. I get to touch lightning, but we do that in a very safe way in our cage.

About that cage thing. You’re basically being struck again and again with lightning bolts, but you’re unharmed because of the way electricity works. Did that scare you the first time? Does it still?

First of all, you’re way up in the air. Although the cage is solid, it moves around a lot. Then you’ve got the giant lightning bolt, which is loud and bright and right in your face. So the first time it’s a little unnerving, but science works the same way every day. Go ahead and touch it and just be careful. Don’t slip.

It doesn’t make you nervous at all?

No, I don’t get nervous anymore. Things that make me nervous are usually things that have to do with the audience. We have hundreds of people in an audience at a time and it’s big and dark. Anything can happen out there. I’m more concerned about, is everything good out there? Is everyone having a good time? Is everyone comfortable and focused on what’s going on?

What kind of reaction do you get from kids and grown-ups when it’s over?

I get little kids who just want to come up and hug me. Adults say, “How come I didn’t learn this in school?” or, “Why wasn’t it this fun?” I met a rabbi once who was really enthralled and kept saying, “This is where you need to be. This is what you’re meant to do.” We just had this long conversation about life.

Do they ask you funny questions about electricity?

I have pretty curly hair so sometimes people ask me,  ‘Is your hair curly because of the electric charge or being electrocuted?’ And, no. A lot of people want to know whether lightning never strikes in the same place twice. That’s a myth, by the way. They also ask, “Can I make a lightning bolt?” That’s another one. But I can’t let people make a lightning bolt.

I feel like there’s always at least one child crying every time I’ve seen the show. Does that bug you?

We try to give warnings to people at the beginning of the show, and on almost every door as you come in, it warns you about bright flashes and loud noises. Whenever we’re about to make a bright flash or a loud noise we’re putting on hearing protection. We let them know that it’s OK. You can leave. It’s fine. We’re not offended if this is not for you. It’s totally cool. But yes, we make children cry regularly.

Are there any cool tricks you can do with the machinery that you don’t do for the public?

No, we pretty much use all the bells and whistles. We’re always working on new things before we eventually use them with the public. Right now we’re working on an ulta-high voltage Van de Graaf. Our giant one produces voltages of about a million volts, a million and a quarter, but that’s three stories tall. This is probably 12-15 feet tall. It’s smaller but produces voltages at that same level. We’re hoping to make some additional large lightning bolts with that.

Who are your idols in the science community?

I get a big kick out of MythBusters. They definitely took things in this way that really helped people understand the process of science, that science can help you understand how things work by asking good questions and developing good experiments.

Do you ever get to do the show for celebrities?

Every once in a while. We’ve had Bill Nye here a couple times as a special guest of the museum. He loved it. The MythBusters were here to receive a special award. I met Alan Alda. We had Elizabeth Warren here this past weekend with her family. We’ve even had, randomly, John Malkovich.

Did you grow up going to the Museum of Science?

I did! My parents took us to a museum at least once a year, sometimes twice or three times if we were lucky and all throughout my childhood. I remember it was a big thing when a Halley’s Comet exhibit came through.

Are there other museums, besides this one, that you love?

I’m a museum nerd. I love the Exploratorium in San Francisco. It’s a very different museum than ours. You just walk around and they have different pieces of equipment you start moving or tinkering with and seeing what happens. Also the Tech Museum in San Jose. Those are two of my favorites.

What would you say is the best part of your job?

Besides making lightning, which is super fun, just sharing my passion for learning. I meet so many different kinds of people who all are here and we have this shared experience together, and they all walk away with a memory. That’s the best part for me.