Outraged over a Crisis at the Border, Protesters Rally at the State House

They called for an end to the family separation policy and for new state law protecting immigrants. 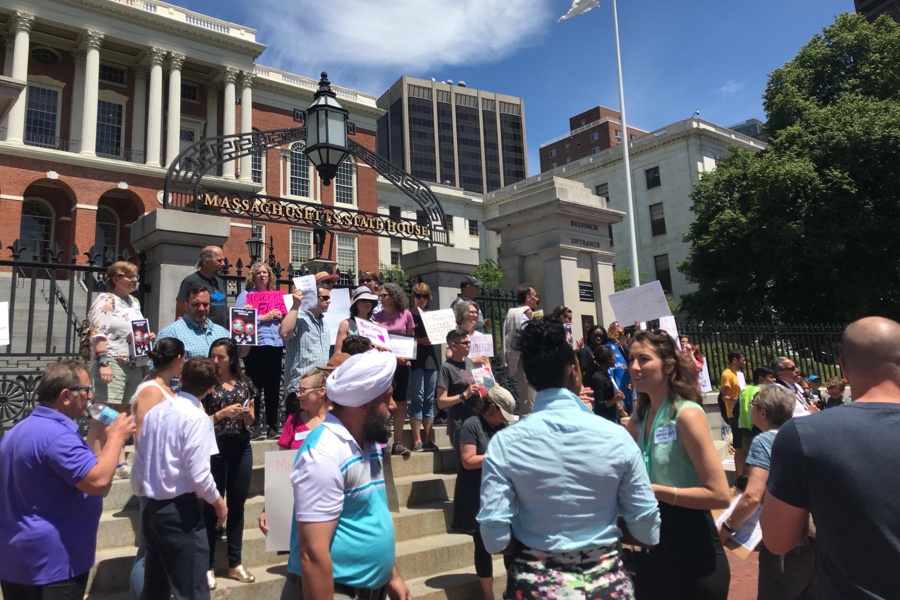 Chanting “No hate! No fear! Immigrants are welcome here!” protesters rallied at the State House Monday to call for an end to the practice of separating migrant children from their families at the southern border, and urge lawmakers to act to protect immigrants at home.

Hundreds turned out for a day of action and lobbying at the seat of state government organized by the American Civil Liberties Union of Massachusetts, the Massachusetts Immigrant and Refugee Advocacy Coalition, and others.

They planned to rally at the State House steps, then venture inside to push state lawmakers to pass Safe Communities legislation, which would limit cooperation between local law enforcement and federal immigration authorities, and prevent police from asking about immigration status. It passed in the Senate in May but has not been taken up by the House. Gov. Charlie Baker has threatened to veto it.

“No hate, no fear, immigrants are welcome here.” pic.twitter.com/AXrfN2qApM

Protesters shouting “SHAME” to condemn the inaction of the Mass. legislature. pic.twitter.com/jbakp4Q2Xy

People streaming in through security, forming a crowd on third floor outside entrance to House of Reps pic.twitter.com/ncHtItb5Zz

Inside, protesters demanded face time with Baker and vowed to vote him out of office if he refuses to sign off on new protections for immigrants.

Another rally is planned on Saturday, June 30 in tandem with a nationwide day of protest organized by the progressive group Move On, called #FamiliesBelongTogether. Details of that protest have yet to be finalized.

“We will fight for our children with all of our force.” pic.twitter.com/tlsZSzMfrS