They're calling for better wages and working conditions. 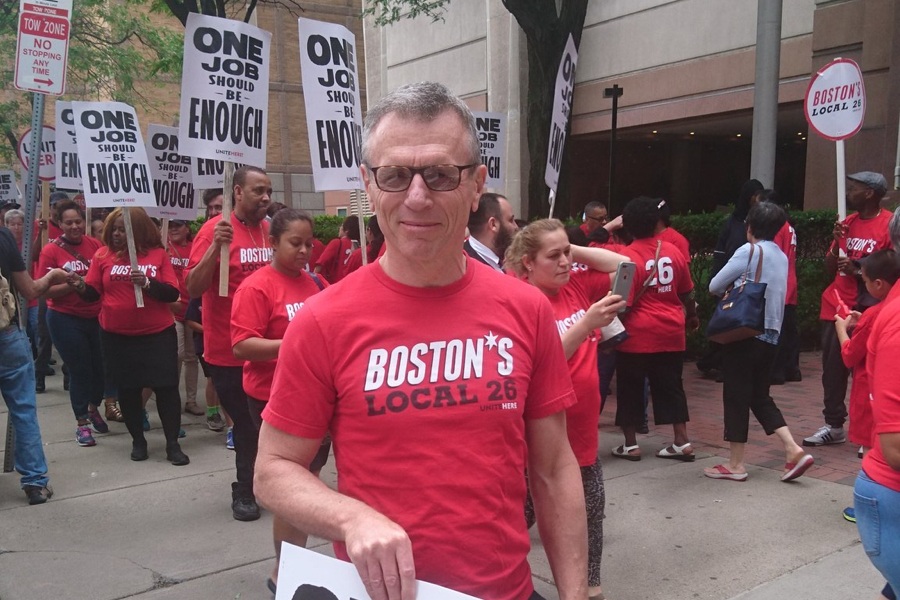 Update Wednesday, June 27: Hundreds of workers picketed outside seven Marriott-run hotels in Boston on Wednesday, waving signs reading “One Job Should Be Enough,” and joining similar action around the country to call for better pay and working conditions for the cooks, cleaners, receptionists and others who power the city’s booming hotel industry.

“I’m ten years away from retirement and shouldn’t feel uncertain about my future,” says Toula Saviddis, a banquet bartender for the Sheraton on Dalton Street and one of many wearing red UNITE HERE Local 26 shirts and chanting outside the hotel. “I need a good contract so I can retire with my family,” says Mei Lung, a 71-year-old Sheraton housekeeper.

@UNITEHERE26 member Mei Leung is 71 and has worked as a houskeeper in the Sheraton for 30 years. “I need a good contract so I can retire with my family,” she said. Here she shows a calloused arm from working on the floor, one of the many aches she said come with job. pic.twitter.com/Vf7u60T1e2

“There are many organizations that support the union,” said @NEJewishLabor regional director Marya Axner, who showed up at the @UNITEHERE26 picket to “get decent wages and health care” for hotel workers. pic.twitter.com/LmMZ8szWmF

Earlier: Hotel workers in Boston will hold their biggest day of action in more than a decade on Wednesday, when hundreds in the UNITE HERE Local 26 union will picket outside seven Marriott-run hotels.

Union leaders say their members want better pay—they’ll be waving signs reading “One Job Should Be Enough,” a reference to the fact that many hotel workers have to hold two or three jobs to make it—along with new safety protections and sexual harassment policies. They also seek an agreement with hotel owners about how to keep them from using new technology to shed jobs. Local 26 has been in contract negotiations with the hotel company since March.

Picketers will be joined by thousands of hotel workers in other cities, including San Francisco, Seattle, San Diego, and Honolulu, who are also locked in contract fights. “Local 26 members are the face of Boston hotels; serving, providing directions, and playing host to business travelers and tourists in a city they themselves can’t afford to live in. Marriott is the largest and the richest hotel chain in the world, and largest operator of major downtown Boston hotels,” the union said in a release adding that members “will call on Marriott to use its leadership in the global hotel industry to create jobs that are enough to live on in Boston.”

The union has had a string of wins in recent years, including a 2016 strike at Harvard that led to better pay and benefits for dining service workers. It also successfully fought for new contracts for dining staff at Northeastern after they threatened to walk off the job.