The 28-year-old progressive beat veteran congressman Joe Crowley, the No. 4 Democrat in the House of Representatives, by a double-digit margin in New York's 14th district. 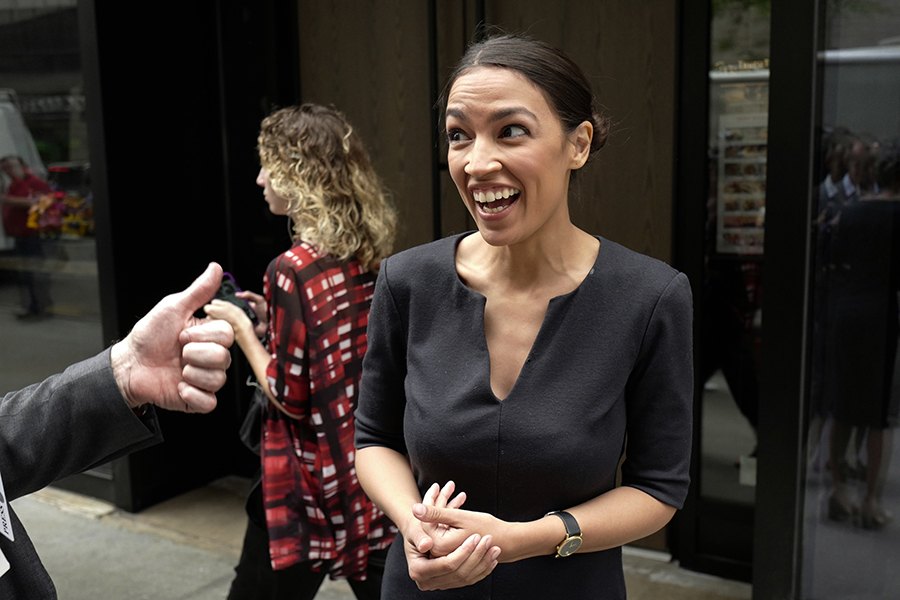 Ocasio-Cortez, a Bernie Sanders campaign organizer and political newcomer, ran on a platform of progressive policies like Medicare for all, defunding ICE, and tuition-free college. Her challenge to, and subsequent victory over, Crowley has left moderate Democrats stunned and the progressive wing of the party emboldened.

The 56-year-old Crowley is the No. 4 Democrat in the House of Representatives and had been in the mix for the speakership, according to the New York Times. He hadn’t faced a primary challenger since 2004 and is the standard bearer of the Queens County Democratic machine. Meanwhile, Ocasio-Cortez, a member of the Democratic Socialists of America, ran an insurgent campaign focused on the working-class people of color who compose the majority non-white district. If Ocasio-Cortez wins in November, she will be the youngest woman ever elected to Congress.

Ocasio-Cortez studied economics and international relations at BU and worked in Sen. Edward Kennedy’s office, according to the Associated Press. She was also involved with the Howard Thurman Center for Common Ground, which strives to bring together students from diverse backgrounds, and studied abroad in Niger, according to the BU student paper, the Daily Free Press.

And though Ocasio-Cortez moved back to New York after college, she’s not entirely shying away from Massachusetts politics. Early Wednesday morning, the newly-minted Democratic nominee tweeted her support for another woman of color mounting a bid to unseat a white male incumbent: Boston City Councilor Ayanna Pressley.

“Vote her in next, Massachusetts,” Ocasio-Cortez tweeted. “We need to elect a corporate PAC-free caucus if we’re going to get things done.”

Vote her in next, Massachusetts.

We need to elect a corporate PAC-free caucus if we’re going to get things done. https://t.co/M2tF5cedTs

Pressley also tweeted her congratulations to Ocasio-Cortez, writing, “You proved that when we stand up for what we believe in, we win.”

Though the parallels between Ocasio-Cortez and Pressley may seem immediate, the former’s victory in New York may not actually be an ironclad blueprint for the latter. As pointed out by POLITICO, Rep. Michael Capuano has taken Pressley’s challenge seriously and has progressive bona fides of his own. Crowley, meanwhile, is more moderate and didn’t even show up for two debates leading up to the election.