A Moveable “Parklet” Is Coming to Newbury Street This Summer

The first of its kind in Back Bay, it will take up two parking spaces at three separate locations. 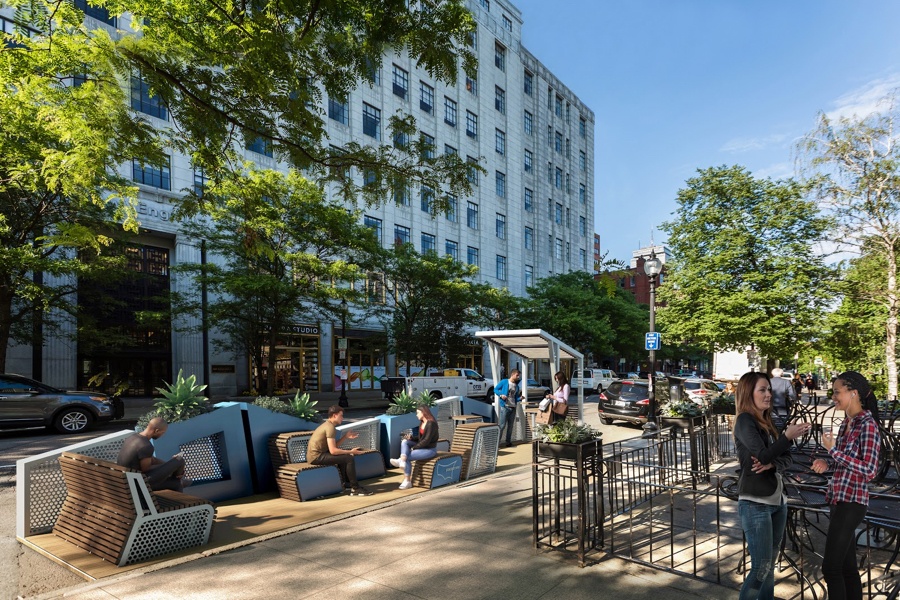 This summer, Newbury Street will sacrifice two parking spaces for a “parklet,” a pop-up array of stylish benches, tables, and greenery offering shoppers in the pedestrian-packed area a new place to take a load off.

Set to be installed at the Sunday, July 8 debut of “Open Newbury,” the first of three days during which the street is closed to traffic, the parklet will be the first of its kind in the Back Bay, and the city’s first-ever moveable mini-park. The miniature porch-like space appear first in parking spots outside Thinking Cup Coffee at 85 Newbury St., then move in front of Shake Shack, and then Pavement Coffeehouse/Pressed Juicery.

“The Newbury Street parklet will add a fresh way to engage with the historic high street and a new outdoor experience for some of the best food purveyors in the district,” Michael Phillips, president of the investment and management company Jamestown, which is sponsoring the space, said in a statement.
It was designed by Kyle Zick Landscape Architecture, which designed two other Boston parklets in Jamaica Plain and Mission Hill during a city-run pilot program in 2013.

Parklets had a bit of a moment a few years back, when they were thought of as a fresh new way of reclaiming and repurposing public space. With the guidance of the city’s Transportation Department, several of them sprouted around the city in 2013. The city even developed a Parklet Program designed specifically to oversee the little pop-up spaces. Right now, you can find parklets in Audubon Circle and Roslindale Village. Another one recently opened up outside a Brookline bakery.

“The Newbury Street parklet will be the first for the Back Bay, providing local residents and the neighborhood’s many visitors with a prime gathering spot,” Mayor Marty Walsh said in a statement. “Parklets are an innovate technique used to increase open space in an urban environment and enhance the quality of the public realm, and I hope everyone will get the chance to enjoy this new one coming to Back Bay.”