Heat indices could reach triple digits on Monday, and meteorologists don't expect a reprieve until the end of the week. A heat emergency has been declared in Boston. 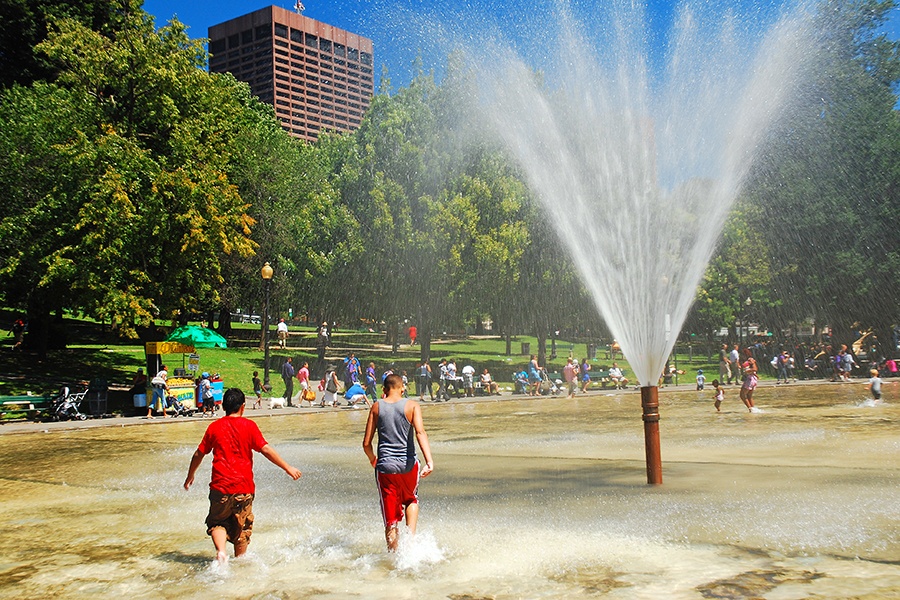 It looks like we’re in for a red-hot celebration of the red, white, and blue.

For the fourth day in a row, temperatures are set to top 90 degrees in Massachusetts, and the heat wave could linger through the end of the week, bringing steamy temperatures for Independence Day.

“The heat is on… again today,” meteorologists at the National Weather Service wrote on Twitter. “Some locations will see day 4 of 90+ degree temps. The combination of heat and humidity will lead to heat indices above 95 degrees.”

The heat is on… again today. Some locations will see day 4 of 90+ degree temps. The combination of heat & humidity will lead to heat indices above 95 degrees. Heat advisory remains in effect for locations away from the coastline. Remember to follow those heat safety rules. 😎 pic.twitter.com/5Zkf01dHrc

The National Weather Service issued a heat advisory from 10 a.m. through 8 p.m. Monday for western and central Massachusetts, where heat indices could climb into the triple digits. The forecasters predict temperatures won’t be quite as extreme in Boston, but with a forecasted maximum heat index of 94 degrees, the Hub will be far from mild on Monday.

The stretch of sweltering days officially reached “heat wave” status on Sunday, when temperatures topped 90 degrees for the third day in a row in Boston. The city’s pools and cooling centers were opened to the public over the weekend, after Mayor Marty Walsh declared a heat emergency in the Hub. A spokeswoman for Boston Centers for Youth and Families told the Boston Globe that more than 1,600 people visited the city’s pools and cooling facilities on Saturday.

In addition to the meteorologists’ heat warnings, the Massachusetts Department of Environmental Protection issued an air quality alert from 11 a.m. to 11 p.m. Monday for much of the Bay State, including Boston. The warning indicates the region may experience unhealthy levels of ozone, the department said in a statement.

And, despite what we may have hoped, the sky-high temperatures won’t be exiting stage left in the immediate future. The meteorologists predict the region will endure heat and humidity “through most of this week,” with highs in the 90s. A reprieve may come around Friday, when “relief is possible,” according to the meteorologists.

The National Weather Service advises anyone spending time outside in extreme temperatures be cautious. The meteorologists recommend frequent rests, light clothing, and consistent water breaks if you’re working outdoors, and warn that children and pets should not be left in unattended vehicles. Staying vigilant and protecting kids and animals in the backseat is especially crucial when it’s hot out because, the forecasters wrote, “car interiors can reach lethal temperatures in a matter of minutes.”

The longest heat wave in Boston history took place in July 1912, when temperatures topped 90 degrees for nine days in a row, according to the National Weather Service. For the sake of everyone who thought a cheap fan from Target would be enough to get them through the summer, let’s hope that record stays intact.