What Would You Pay to Fix Boston Traffic?

It won’t cost a fortune, but raising the gas tax could ease the worst part about living in Boston—the traffic on I-93. 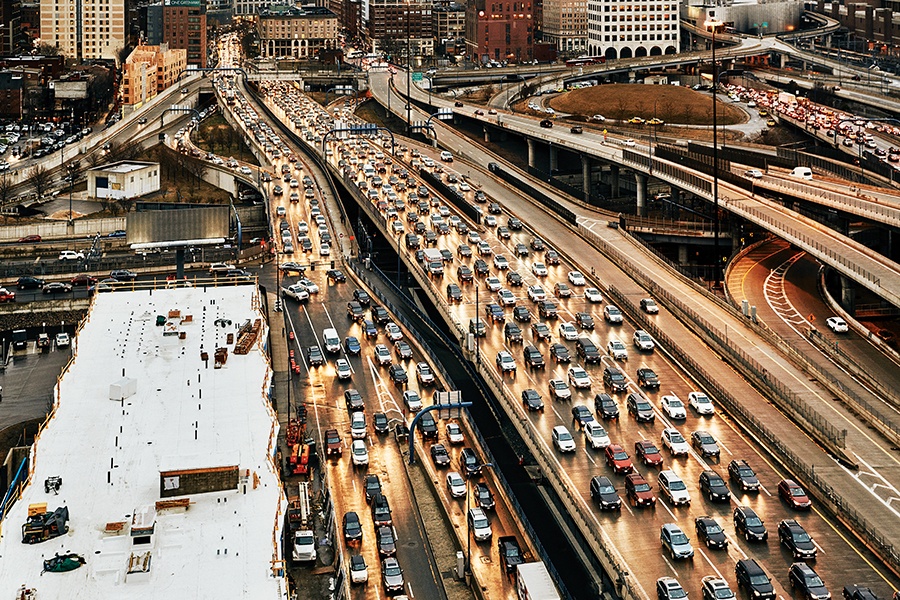 Highway to Hell, otherwise known as I-93 South. | Photo by Bob O’Connor

If you want to fully appreciate how dysfunctional Boston’s thicket of congested highways and patchwork streets has become, try heading home from work on a Friday afternoon in July. I-93 South is bumper to bumper with Cape traffic, the Mass. Pike has snarled to a standstill, and the secondary streets that feed into our city’s major arteries are a Hogan’s Alley of axle-snapping potholes. It all serves as a constant reminder that while we may be living in a new golden age of innovation and prosperity, the cost of being a Bostonian is impenetrable, mind-numbing gridlock. Those precious hours we waste each year banging our head against the steering wheel will likely be among the chief reasons Amazon’s HQ2 ends up elsewhere. The good news, though, is that a solution—and the cash required to pay for it—is within our grasp. We can fix our expressways, expand our highways, and even extend public transit to get some drivers off the road. All we have to do is remember how to say “yes” to the unfairly maligned, oft-forgotten gas tax.

First introduced in the early half of the 20th century, it started as a simple idea: States (and the feds) tax every gallon of gas sold and use the proceeds to build roads and keep them up to snuff. For decades it worked like a charm, with wide support across the political spectrum. And why not? Conservatives can frame it as a user fee that’s a far better way to fund our roads and bridges than, say, jacking up income taxes. Progressives can spin it as an environmental-minded win that helps fund public transit and discourages drivers from clogging the streets. Moreover, infrastructure is pretty much the only thing many people can agree on: It’s broken, and we should invest in it. Easy, right?

Well, not exactly. In recent years, Bay State voters have consistently raised holy hell at the prospect of paying more at the pump, despite the growing commutes and crumbling highways. Then-Governor Deval Patrick had the mettle to raise the gas tax by a mere 3 cents per gallon in 2013, with a provision to let it grow to keep up with inflation. The very next year, though, voters across the state—left, right, and center—banded together and passed a ballot initiative steamrolling Patrick’s reforms. “The long-standing bipartisan agreement that the gas tax should keep up with the costs of building and fixing the system seems to have died out,” says Chris Dempsey, director of the advocacy group Transportation for Massachusetts. “The result is a transportation system that doesn’t work very well for anyone.”

So, what should we do? Ratcheting up the gas tax would be a good start. Right now, despite all the historical bellyaching about “Taxachusetts,” we pay a 26.5-cent state tax per gallon—the second-lowest in all of New England, more than a nickel cheaper than the national average, and nowhere close to Pennsylvania’s 58.7 cents per gallon, the highest in the nation today. “The gas tax is a user fee, which is a good way to fund our transportation system,” Dempsey tells me. The cost of us shirking it, he says, is that our roads are “choked with congestion and falling apart.”

Here’s the thing: The longer we drag our lead feet, the worse the problems will be. Boston commuters spent an average of 60 hours stuck in rush-hour traffic last year—among the most of any city in the world—and more commuters are on the way. Critics are right when they say the rise of fuel-efficient cars and electric vehicles means the gas tax is only a medium-term fix, and we will need ideas such as smarter tolling systems that impose higher fees during peak traffic times so drivers pay for the amount of road they use rather than the gas they burn. But right now, if we’re serious about fixing our roads and lifting the burden of living in Boston, it’s time to stop trying to reinvent the wheel and go back to using a tool that has worked since the days of the Model T—before we run out of road.