One Last Question: Can I Take a Dip In Any of Boston’s Rivers?

Whether or not you’d actually want to swim in the five official rivers that run through Boston, we asked the local authorities whether you could swim within city limits. 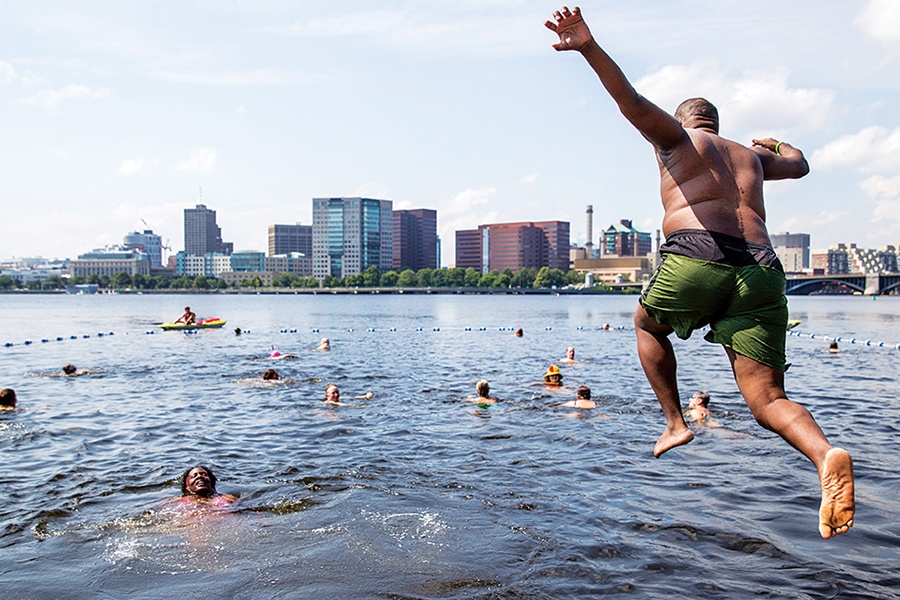 When I was growing up in a small town in Georgia, we always used to go swimming in the river that ran near town. I’ve lived in Boston for eight years, and now that it’s summer again, I’ve been wondering: Is it possible to take a dip in any of the city’s rivers?

Forgive me if I date myself, M.R., but your question made me think of the country song “Chattahoochee,” a hit for Alan Jackson in the early ’90s. The reason I remember it so well is that his catchy saga of drinkin’, lovin’, and learnin’ to swim in that Georgia river was roundly exotic to this urban New Englander, who grew up knowing our rivers had been polluted for at least a century.

Leaving aside whether or not you’d actually want to swim in the five official rivers that run through Boston, I asked the local authorities and watershed associations whether you could swim there within city limits. Boston Parks & Rec informed me that the flotsam-choked Muddy River is in fact an off-limits flood basin for the Fens. The Mystic River Watershed Association said you can swim in the Mystic only in its suburban Winchester, Arlington, and Medford preserves. Meanwhile its riverine twin, Chelsea Creek, is still burdened by decades of runoff from heavy industry and waterfront storage of fossil fuels. I did, however, get a nice surprise from the Neponset folks: That river does indeed have one city swimming spot, Dorchester Bay’s Tenean Beach, though water quality is variable during the summer.

Lastly, there’s the big daddy Charles. After being closed to natators for 50 years, in 2007 the river was opened for an annual one-mile race. And since 2013, regular bathers have enjoyed the Charles River Conservancy’s City Splash, held on one day in July. According to the state’s Department of Conservation and Recreation, these are the only “special-use permits” for river swimming in the city. And actually, City Splash isn’t even happening this year, because the conservancy is working instead on the feasibility of a “swim park” near North Point that would be open all season. If that project goes through in the future, you would enter the river water via a dock, and it would be a pool-like structure with a false bottom to keep that sketchy sediment away.

Let’s stay positive, though: Our rivers have vastly improved over the years, and for now, you can enjoy paddling or sailing on them. But if you must immerse yourself during the dog days of summer, may I humbly suggest that you stay cool in your local pool—or simply hit the beach.