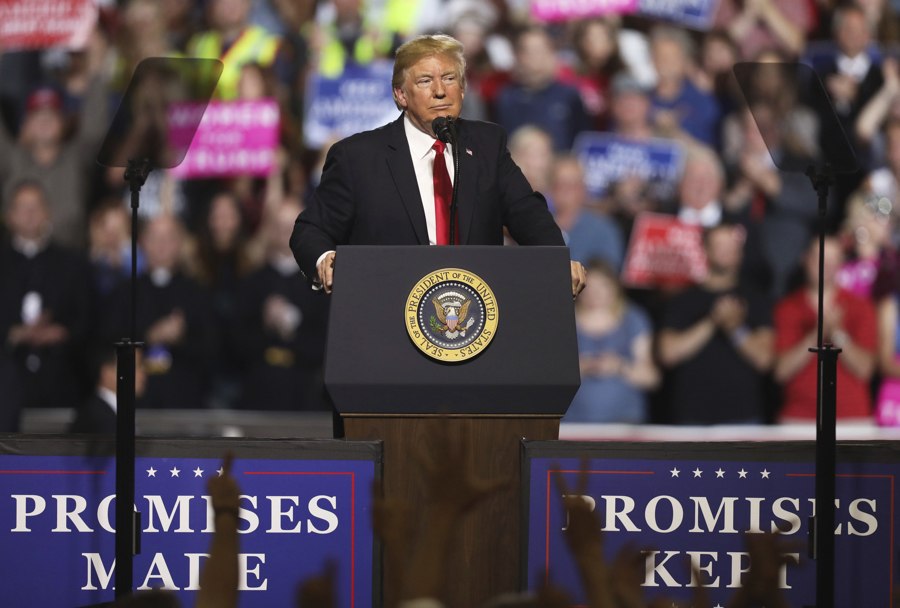 Update, October 15: Elizabeth Warren has released the results of a DNA test that “strongly supports” her claim of Native American heritage. Trump now denies he ever made the $1 million offer.

In another real stemwinder of a speech straight from our president’s normal brain, Donald Trump on Thursday said that if he were to face off with Elizabeth Warren in a debate, he would offer to pay $1 million to charity if she took a DNA test to prove she has Native American heritage.

“I will give you a million dollars to your favorite charity, paid for by Trump, if you take the test and it shows you’re an Indian,” he said at a rally in Montana, fantasizing about what he might say to Warren in a debate. “I have a feeling she will say no.”

Trump, who has been accused of sexual misconduct by several women, also managed to slip in a jab at the #MeToo movement.

“I’m gonna get one of those little kits,” he said, “and in the middle of the debate, when she proclaims that she’s of Indian heritage, because her mother said she has high cheekbones—that’s her only evidence, that her mother said she had high cheekbones—we will take that little kit and say—but we have to do it gently because we’re in the #MeToo generation, so we have to be very gentle—and we will very gently take that kit and we will slowly toss it hoping it doesn’t hit her and injure her arm even though it only ways two ounces.” The #MeToo quip doesn’t make sense, sure, but you’re used to that by now.

Look at him go:

“I’m going to get one of those little DNA kits and if I’m debating her, we will toss it to her, very gently so it doesn’t injure her arm, and we’ll say, ‘Pocahontas, I’ll give you a million dollars if you take the test to show you’re an Indian!'” – Trump on Elizabeth Warren pic.twitter.com/iunEDZ21Sr

Warren hit back later that night with a tweet citing reports that the Trump administration is using DNA kits to identify the family members of thousands of children separated from their parents under the “zero tolerance” policy at the border, as part of a scramble to meet court-ordered deadlines to do so.

Hey, @realDonaldTrump: While you obsess over my genes, your Admin is conducting DNA tests on little kids because you ripped them from their mamas & you are too incompetent to reunite them in time to meet a court order. Maybe you should focus on fixing the lives you’re destroying.

The stream-of-consciousness rambling from the president doesn’t just come from nowhere, of course. Opponents of Warren have been raising questions about her family history for political purposes for years now. Hoping to fight back on what has clearly become a political liability, this year she has set about trying to describe exactly how she came to believe that she’d had native ancestors (it was about more than just bone structure), explain that the link between her heritage and its supposed benefits to her academic career is overblown, and heal wounds with native communities who joined in the criticism of her. She has also pledged to pay special attention to native issues.

In case it matters (it probably doesn’t, as everyone has likely made up their mind about the issue already), a DNA test wouldn’t necessarily prove one way or the other if Warren had any Native American ancestors. She has rejected other calls to settle the issue by sending her spit to a lab, including one that appeared in an editorial in the local newspaper the Berkshire Eagle, which touched off a brief national political upheaval in March.

The $1 million offer is almost certainly a ruse, by the way. There is nothing Trump dislikes more than giving to charity with his own money. All of this is reminiscent of his birther days—he once made a similar offer of $5 million to Barack Obama if the first black president could prove he wasn’t born in Kenya. Even though Trump in 2016 went on to finally say he believed Obama was a citizen, he has never paid.