Jeff Sessions Is in Boston Again

At a Boston photo op, he announced charges against 28 people for "document and benefit fraud." 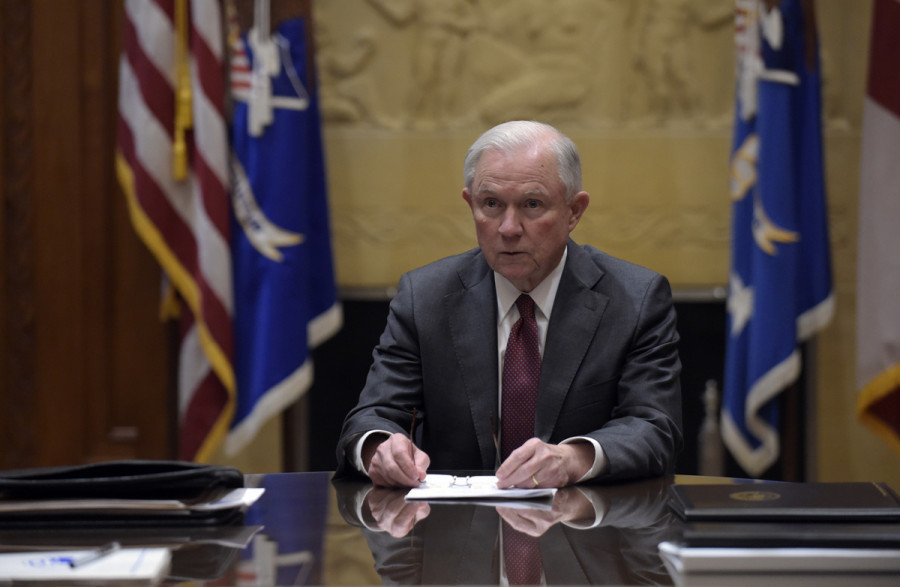 U.S. Attorney General and aggressive anti-illegal immigrant crusader Jeff Sessions is making another appearance in Boston today, this time to announce charges against 28 people, the majority of whom are undocumented, for “document and benefit fraud.”

In a press conference at the Moakely Courthouse, Sessions said his department’s so-called “Operation Double Trouble” uncovered more than dozens of cases of identity theft committed by undocumented people, who are not given social security numbers, are not allowed to work legally, and can’t receive Medicare or Social Security.

“Many of them lie to defraud the taxpayers of this country, including the hardworking people of Massachusetts,” Sessions said. “Across this city and across America, teachers, truck drivers, and construction workers are going to work and paying taxes that are being stolen from the public treasury by fraudsters and criminals. We do not think that can continue and we do not intend for it to continue.”

Sessions also made an appearance in Boston in September to discuss the gang MS-13.

Sessions’ appearance came not long after his rollout of a new “zero tolerance” policy at the U.S.-Mexican border triggered the ongoing family separation crisis that has fired up activists around the country, and after he inveighed against “sanctuary” cities at a speech in New Hampshire, singling out Lawrence, Massachusetts. It comes the same week that a report revealed the Department of Justice has directed its attorneys to drop the use of the word “undocumented” in favor of “illegal aliens.”

At the press conference, Sessions was also asked to comment on Trump allies’ moves to impeach Deputy Attorney General Rod Rosenstein (he still has his confidence, Sessions said), as well as the controversy that came after he laughed along to a “lock her up” chant at a summit for conservative high schoolers (he should have reminded the teenagers people are innocent until proven guilty, he quipped), and on sanctuary cities (“I can’t imagine why a city or a county or a state would think that someone who enters the country illegally who is subject to being deported for that alone is somehow to be protected even when they commit serious offenses,” he said).

Regarding the conflict between state and federal law on marijuana that has come to a head in states like Massachusetts that have legalized the drug, Sessions said, “Personally my view is that the American republic will not be better if there are marijuana sales on every street corner, but states have a right to set their own laws and will do so, and we will follow the federal laws.”