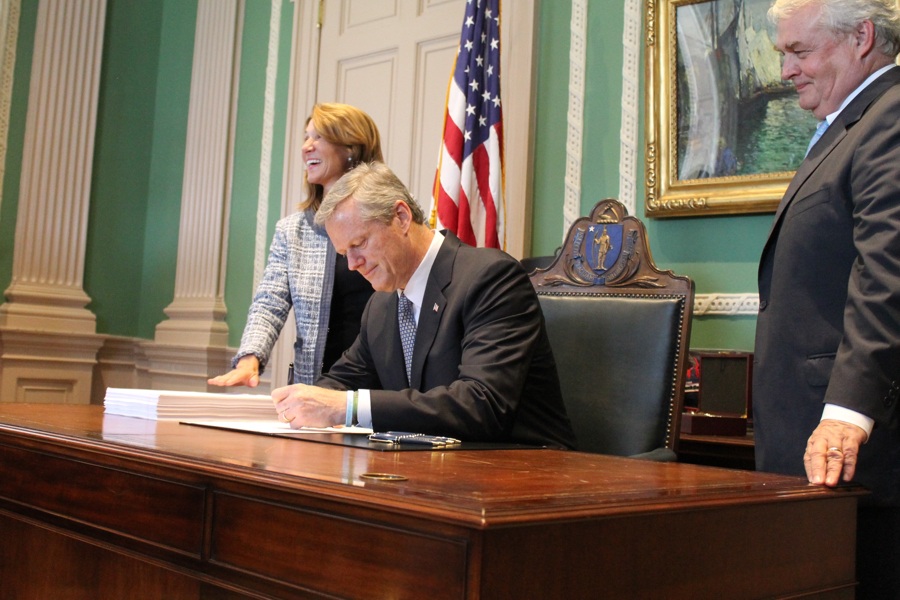 Goodbye, Massachusetts’ 173-year-old law against abortion which is somehow still on the books. Adios, the states’ still-technically-in-effect ban on contraception for unmarried couples.

Flanked by Democrats in a State House Ceremony, Gov. Charlie Baker, a pro-choice Republican, signed off Friday on the NASTY Women Act, a move designed to both delete outdated laws and to protect abortion rights at a time when the fate of Roe v. Wade is uncertain.

The name of the law, which is of course a reference to the Trump-insult-turned-rallying-cry, is an acronym for Negating Archaic Statutes Targeting Young Women. It passed unanimously in the Senate and overwhelmingly in the House (138-9) before landing on Baker’s desk.

“Today, we formally repeal a number of antiquated laws, some of which could lead to denying young women reproductive health care,” Baker tweeted after the signing. “These laws do not represent Massachusetts’ leadership on these issues or the shared goal of protecting women’s access to health care.”

It’s largely symbolic, and designed to make a loud political statement—which it has, as the cleverly named law has attracted plenty of national attention. The state hasn’t enforced its anti-abortion or anti-contraception laws in a very long time, a state Supreme Judicial Court decision in 1981 backed up the right to an abortion, and our deep-blue leadership is unlikely to try to restrict access anytime soon, Roe or no Roe.

At the same time, local lawmakers and women’s advocates say they have legitimate concerns about what might happen if Trump nominee Bret Kavanaugh is sent to the Supreme Court. Trump has vowed to appoint anti-abortion judges, and Kavanaugh could be the deciding vote to weaken or perhaps overturn the landmark 1973 ruling, which legalized abortion nationwide.

“We have both a president and a vice president who have expressed an intent to overturn Roe v. Wade and we take them at their word,” House Judiciary Committee Co-chair Rep. Claire Cronin told the State House News Service. “We must ensure that if this occurs, in Massachusetts we have taken the necessary steps to protect the right to choice and to protect the right to access to health care and access to the information need to make private medical decisions. These will be upheld.”

“I think people are beginning to realize these are strange times we live in. Nothing is impossible, and we’ve got to have a ‘plan B.’ If these laws are enforced, what do we do?” then-Senate President Harriette Chandler, recently told Time. “We’re not willing to sit back and say, ‘Well, it’s not going to happen here.’ The word for that is denial.”