The Battle for Boston

One of the distinguishing traits of great cities is that they’re furiously alive, which is to say they’re constantly changing, and Boston is no different.

I’d been living in Southie for a couple of years when it happened: After running errands one afternoon, I returned home to find the parking space I usually occupied near my apartment invaded by an unfamiliar car. It had to be one of the “friggin’ commutahs,” I thought, those suburban deplorables who’d discovered they could park in my neighborhood all day for free owing to the lax residential-parking rules. Given that most of the locals were on a first-name basis with half of the City Council in the ’90s, the lack of enforcement was no oversight on the city’s part: The commuters were a small price to pay for being able to register your Crown Vic up at your cousin’s place in tax-free New Hampshire.

After finding a new space and lugging my groceries down the block, I groused about this injustice to my next-door neighbor Charlie, a silver-haired retiree whose wife loved to sit out on the stoop basted in tanning oil until she turned the color of an Easter ham. “Shoulda marked ya spot,” he replied, shaking his head as he took a long pull on a Parliament. While it may have seemed like there were no residential-parking rules, double-parking rules, street-sweeping rules, or official parking restrictions of any kind back then, there was one absolute rule, obeyed by locals, commuters, and the police alike: If you saw an empty space marked with an orange cone, you left it alone. So, like all the other lifers on the block, Charlie never left the spot in front of his house without putting out the cone he kept in the trunk. It was how it was done. 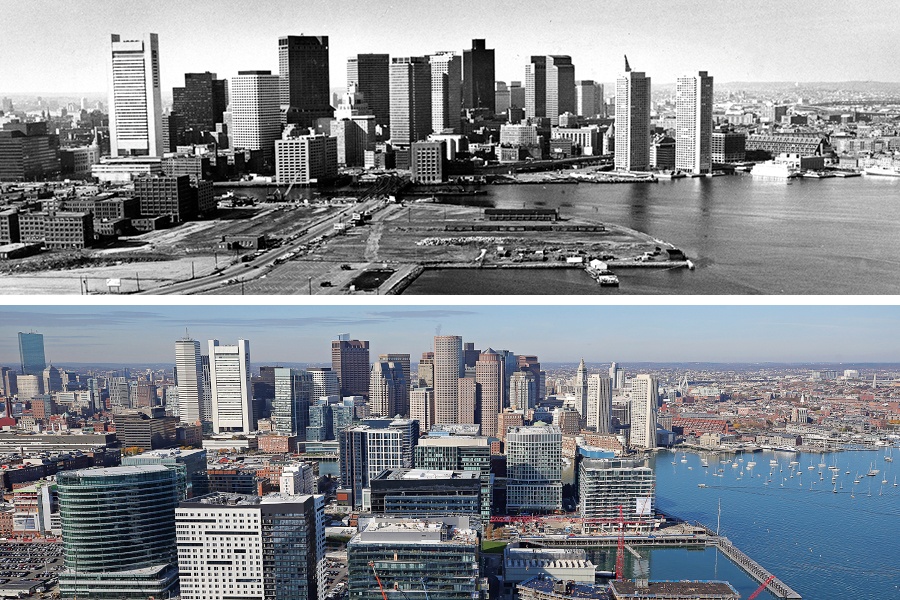 “I don’t know,” I replied. “I didn’t figure I’d lived here long enough to claim a space.” If there was one thing the neighborhood tribe always made sure newcomers knew, it was that they weren’t part of it, and probably never would be. But if you showed that you understood your place, they could actually be quite friendly, even to an outsider. At that moment, Charlie looked slightly sideways at me, as if in judgment, and then said, “Nah, you’re good—we all know you here.”

While Boston has lost some of its deeply rooted culture, it’s also shed some of the parochialism that came with it.

That’s a story that couldn’t happen today, and the fact that you now need a resident sticker to park on that block is only the smallest part of it. Charlie and most of my other neighbors long ago cashed out and moved down south to Quincy, or Florida, thanks to the real estate boom that made some of them millionaires. A short walk down A Street takes you past the construction site for GE’s new headquarters, just around the corner from where hundreds of Amazon employees just moved into their new office on Melcher. Stroll just a few more blocks, and soon you’re surrounded by the Seaport District, which might as well be in Dubai, given that everything from the mirrored buildings to the stores, the restaurants, and all the people inside them seem to have dropped from the sky. The city’s skyline has grown more in the past five years than it did in the prior two decades: The Bulfinch Crossing, One Dalton, and Winthrop Square projects alone will add more than a thousand ultra-luxury apartments and condos towering high above the leafy boulevards and narrow alleys of the North End, the Back Bay, and the Theater District when they’re completed.

As the unseen hand of the free market has sorted the cities of the world into winners and losers, Boston has landed squarely on the winning side. But as the tide of global wealth has flowed in, it’s undoubtedly washed out many of the people and institutions that created and cared for the city over generations. And while there’s much to like in this new Boston we’re becoming, the parts that seduced me when I first moved here are largely the ones now gone or rapidly dwindling.

Like many newcomers, I arrived in the area as a college freshman—in my case, on the campus of Tufts University in August 1994—and like most, I assumed my stay here would conclude upon graduation. That likely would have happened if not for a long series of coincidences that led to a job as a retail clerk at the David P. Ehrlich company, a cigar shop one block from City Hall whose history dates back to 1868. It’s gone now, a victim of rising rents and nanny-state smoking laws, but the mid-’90s were a golden age, as Cigar Aficionado briefly made stogies great again.

The store itself was a living shrine to Boston as it had been for generations. Original Currier & Ives prints vied for wall space with a presidential ballot featuring a Republican candidate named Abraham Lincoln, but what gave the shop life were the customers, who represented an (admittedly male) sociological cross section of the city at that moment, from partners in law firms who’d stop by for a $500 box of smokes to celebrate closing a deal, to a very tall, soft-spoken, and presumably insane man who always wore a long black robe with a purple sash and fez. Naturally, we let him buy on store credit, because why wouldn’t you trust a man who claimed to be the 400-year-old archbishop of Ethiopia?

From its founding days, Boston sought to be a city of the mind, and a good argument can be made that the industries and institutions inside Route 128—or within 5 miles of the State House, for that matter—now represent one of the greatest concentrations of brainpower on the planet.

When graduation rolled around, it wasn’t my college’s career office that helped me land my first break, but one of my fellow employees, who shoved a manila envelope with my résumé and a wad of clips from the college paper into the hands of one of our regulars, a reporter whose byline appeared on the Boston Herald’s front page several times a week as he covered the sensational mafia trials making their way through the federal courts. A few weeks later, I found myself walking through the vast, old-school newsroom for my first shift as a City Desk editorial assistant. While most of my job consisted of sorting the mail and writing hundred-word obituaries for people few had ever heard of, I felt like I was sitting at the beating heart of the city, with ink pumping through giant presses you could hear and smell right down the hall from the sprawling newsroom. Late at night, when the scanner crackled, and the night photo chief announced a potential death investigation—“I think we got ahselves a croakah!”—with a little too much glee in his voice, I thrilled at the sense that I was seeing the real city, not the one of bow-tied professors and Brahmin bankers, but of bus drivers and cops, firefighters and ironworkers.

But in another one of life’s twists, like the one that brought me to Boston, my career at the Herald would be as short as it was happy. Wanting to stay in the city and enjoy a slightly higher standard of living, I took a job at a Web startup in 1999, and while I didn’t come close to becoming a millionaire there, it catapulted me into the software industry at the height of the first dot-com boom, and introduced me to the person who five years later would become my partner in our own software company. As I watched one beloved element after another of the old city fade, from my cigar shop to the Herald to old neighborhoods like my block in Southie, I realized that, unwittingly or not, I was becoming the person this new Boston was being built to serve and delight. And to be completely honest, if Boston has in some ways grown duller and more predictable at the same time as it’s grown wealthier, I wonder sometimes if I’ve done the same.

One of the distinguishing traits of great cities is that they’re furiously alive, which is to say they’re constantly changing. While Boston has lost some of its deeply rooted culture, it’s also shed some of the parochialism that came with it. There are a lot more people in positions of power who aren’t guys with names like Flynn or Finneran, or even guys at all, and we’ve avoided becoming a one-industry town like San Francisco, or a one-company town like Seattle, where Amazon controls almost one-fifth of the class-A city real estate. From its founding days, Boston sought to be a city of the mind, and a good argument can be made that the industries and institutions inside Route 128—or within 5 miles of the State House, for that matter— now represent one of the greatest concentrations of brainpower on the planet. So onward and upward, I say—as long as we don’t forget where we came from.