From Brahmin Banks to Silicon Valley 2.0

Chad Gifford: When I was promoted to CEO of Bank of Boston in 1995, it was arguably the major financial player in the city. Back then, business leadership used to be centered on a few institutions, a few individuals: Bank of Boston, Gillette, John Hancock. Now it’s much more diffuse than it used to be.

Corey Thomas: You can’t talk about New Boston without talking about the concentration of research centers and academic research that happens here. I think that is a huge asset. The other key to success is that if you look over the past five to 10 years, especially the past five years, you have more and more successful companies across the spectrum: the high-tech sector, software, automation, security (which I’m part of), biotech, major revolutions in healthcare. So you have both academic success and firms being successful, and success attracts other successful companies. We are in a positive cycle and we have to continue to nourish that. 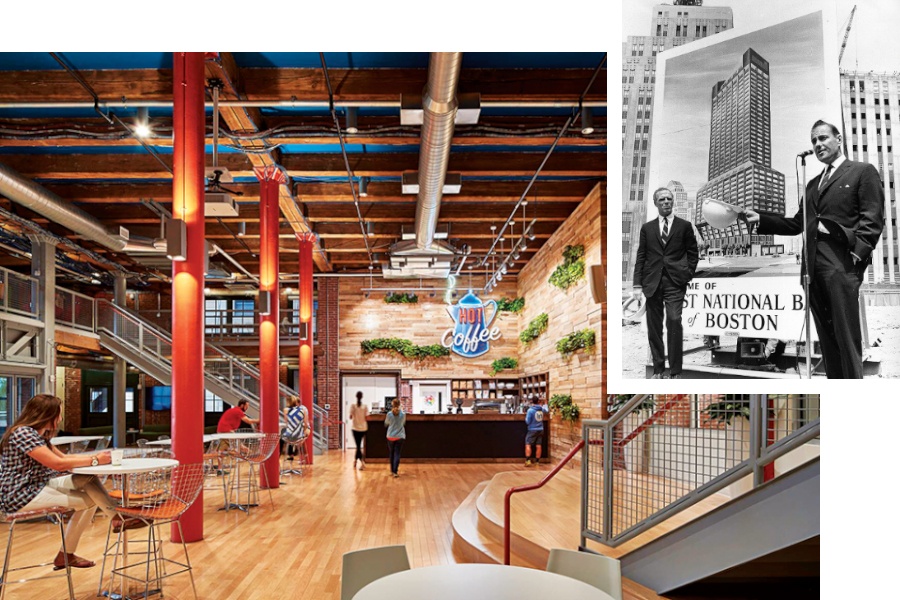 CG: I think the most famous member of the Vault [the since-disbanded cabal of business titans] was Dick Hill, the late former chairman of First National Bank of Boston. During the financial crisis of the 1970s , he marched up to the State House to basically advise the governor and other leaders on Beacon Hill on what had to be done to strengthen the financial status of the commonwealth. We expected that from people like him.
I had a very close, very active relationship with Mayor Menino. He understood that he could do a better job as mayor if he worked closely with business leadership. He wanted to work together for everybody’s benefit, most of which I would say accrued to the benefit of Boston.

CT: Mayor Walsh and John Barros [his chief of economic development] have talked about the balance of attracting talent with getting more inclusive, ensuring that as we make Boston successful that more people participate in the success, and showing that in the commitment to both schools and local communities. I love that they talk about those things in the same breath. I’ve been blessed, but I think the experience of lots of people of color in Boston could be a lot better and should be a lot better. When we were looking at moving to San Francisco or Boston, one of our fears was the inclusion issue. We had talked to other people who had had horrible experiences, frankly.

CG: It hurts to hear that. The busing crisis was well known throughout the country, and that was driven by folks who were, let’s just say, not progressives. That reputation has lingered. I think it’s a stereotype that is at the very least a little unfair. I hope it’s increasingly becoming a lot unfair. We should be progressive and inclusive because that’s where the future is and that will strengthen us.

CT: Nothing changes overnight. You still have good-old-boys networks, but different voices and perspectives are actually coming into power that are more inclusive. I think that both of those exist in the same space.

CG: Boston should be very attractive to Amazon because of the quality of the people that live and work here. In terms of cost, we probably don’t have an advantage. In terms of transportation, we probably don’t have an advantage, so I don’t know what’s going to happen. I wish Amazon would say, you know, it’d like to do a 5,000- or 10,000-person operation. I think it is the most interesting company in the world, what Jeff Bezos has done. The more active they are here, that’s good news for Boston. Whether we can fit 50,000, I don’t know.

CT: I don’t think that we live in a world where you can look at any one thing in isolation. We want to attract companies like Amazon here and we want to retain more of our academic talent and we want to get more diverse talent into the workforce, participating in the community, and you need housing and other things. These are all multi-factored, multifaceted issues, but just sort of saying that because we have housing issues means that we don’t want healthy companies coming into town, I think that is just not true.

CG: When it comes to wealth, I don’t particularly like to see people showing an awful lot or talking about their money, but I also don’t criticize them when they do it.

CT: In other parts of the world, wealth is over-glorified. For my wife and I, that’s just not the sort of environment we wanted to raise our kids in. That’s an aspect of Boston we really liked and were attracted to. Wealth is most evident for our family in the experiences we have.

CG: People say, “You’re the last of the Brahmins,” and I ask them what it means. Yeah, I’m a Yankee and an old Yankee; I guess I’m certainly old. I think there was a time when—the Saltonstalls and that vintage—there was a prototypical Brahmin type. It’s certainly not where Boston is right now. Happily, we’re much more diversified, and I think that’s a great strength.

—As told to Spencer Buell