From Underdogs to a City of Champions

Retired Boston Globe columnist Bob Ryan and Barstool Sports writer Jared Carrabis, a Saugus native, reflect on half a century of sports history—and what it means to a new generation of tried-and-true fans.

BOB RYAN: The first opportunity I had to see the Celtics, I went. I was so excited about going to the Boston Garden. I still have the ticket stub. I sat in Section 99, Row B, Seat 8, for $3, on Saturday, October 17, 1964. They beat Detroit 112–81. I wrote it down on the back. It’s almost gone now; I am barely able to make it out. Back then, when Boston Garden organist John Kiley wanted to stir the crowd, he played the “Mexican Hat Dance.” Now, there’s a woman who makes the NBA halftime circuit riding a unicycle and tossing dishes up in the air. The entire fan experience was different. It’s a night out now. It’s about being entertained over and above the game.

JARED CARRABIS: My earliest memory of going to Fenway was like, This ain’t the Garden. It’s a completely different atmosphere. It’s more like a neighborhood; it felt like everyone was a regular. It’s unlike any other sporting event I’ve ever been to, the hominess of Fenway. 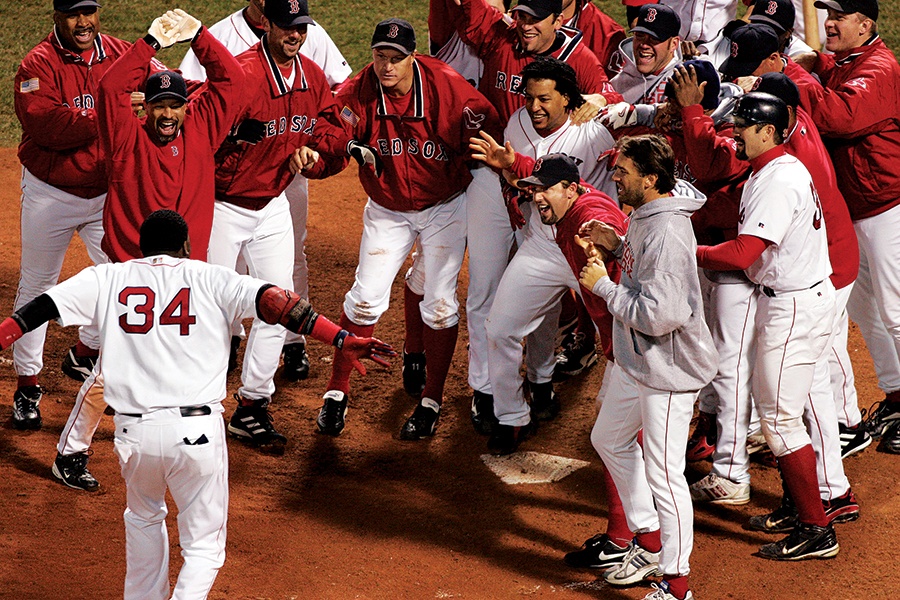 The night that changed everything: Game 4 of the 2004 ALCS. / Boston Globe via Getty images (Red Sox)

B.R.: In the ’60s, Fenway was far from the shrine, or “baseball basilica,” as my friend Clark Booth called it. It was like the old sofa at Grandma’s house that you were putting out on the curb, hoping someone would take it. But in 1967, right around Memorial Day, we went to a doubleheader and sat in the Fenway bleachers. The Red Sox beat the Indians in both games, and I got hooked. Those were the first two of 27 games I went to that summer. That’s how we wound up behind the screen at home plate for October 1, 1967—the day they won the pennant. It was one of the most famous days in Red Sox history, and the greatest fan experience in my life. Everything this organization has today, they owe to the 1967 team for reviving baseball interest in Boston.

J.C.: Nomar’s rookie season was in ’97. That was my guy. The following year, my dad was like, “The Red Sox just got this new pitcher; he’s supposed to be pretty good. We might want to get Red Sox season tickets.” We’ve had them ever since. I feel so bad for the younger Red Sox fans today that they’ll never know what it was like to be at Fenway for a Pedro start. That was my childhood. Pedro day. Nomar. The batting gloves. Manny hitting bombs.

I was at Game 4 of the 2004 ALCS, and that was the game that changed the whole landscape of sports. After their heartbreaking loss in 2003, you could feel how much the crowd wanted a win. It was like dangling a steak in front of 36,000 people who hadn’t eaten in two weeks. Now, we’ve eaten. The energy in the ballpark will never, ever be like that again. But that’s okay. If that’s the price of winning multiple championships, I’ll gladly eat the steak. I’ve witnessed the greatest span of Red Sox baseball in a franchise that’s been around for almost 120 years. I don’t take that for granted.

B.R.: There is some honor in rooting for a losing team, but winning is more fun, isn’t it? We’re truly in the golden era right now. The Red Sox are in the mix. The Patriots are the Patriots. Who isn’t excited about the Celtics looking forward to next year? And the Bruins need a bit more, but they’re on the right path to get it done again in the not-too-distant future. This is our century, until further notice.

—As told to Jacqueline Cain