One person was taken to the hospital. 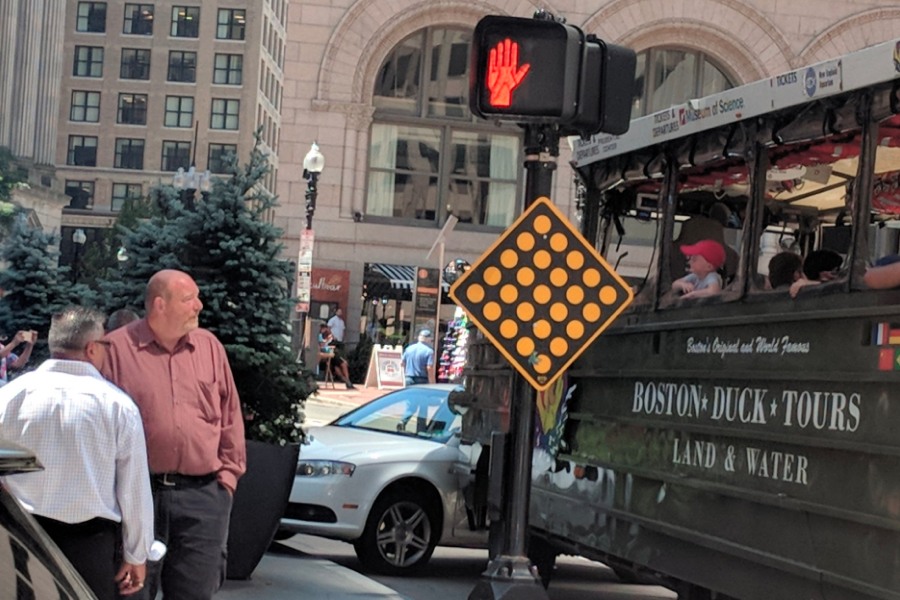 One person was taken to the hospital for evaluation Thursday afternoon after duck boat collided with a car at the corner of State and Congress streets by Boston’s Old State House.

A woman was transferred to a local hospital after the crash around 1:30 p.m., police say.

Photos and video from the scene show the front of one of the giant amphibious vehicles pushed up against the driver side of a white Audi sedan. The vehicle is operated by Boston Duck Tours and goes by the name “Liberty Teresa.” The driver of the vehicle, per state law and the company’s policy, is not allowed to both operate the duck boat and give a tour at the same time. A bystander told media in the area the driver was “100% concentrating on the road.”

In a statement, the company described the crash as “minor” and said it did not appear that the driver was at fault.

“We can confirm that there was a minor accident at the corner of State and Congress. There were no injuries,” the company said in a statement to WBZ. “Unconfirmed reports from witnesses on site said the Duck was not a fault.”

The crash is not far from the collision that killed a woman who was aboard a motorized scooter in 2016, and comes weeks after a duck boat tragically sunk in stormy weather in Missourri, killing 17.

The area, a busy intersection that is flooded with pedestrians this time of year, has been cordoned off with police tape and closed to traffic.

Looks like a duck boat hit a car right outside the old state house @universalhub pic.twitter.com/QK0t11W5qr

#BREAKING: A passenger on board the duck boat involved in a crash with a car at Congress and State Streets in #Boston tells @bostonTVguy that the driver of the duck was “100% concentrating on the road” and took action to avoid the crash.@WFXTMalini @boston25 pic.twitter.com/eMHMLopFbC