The Red Sox walked away with a four game sweep of the New York Yankees in the 10th inning. 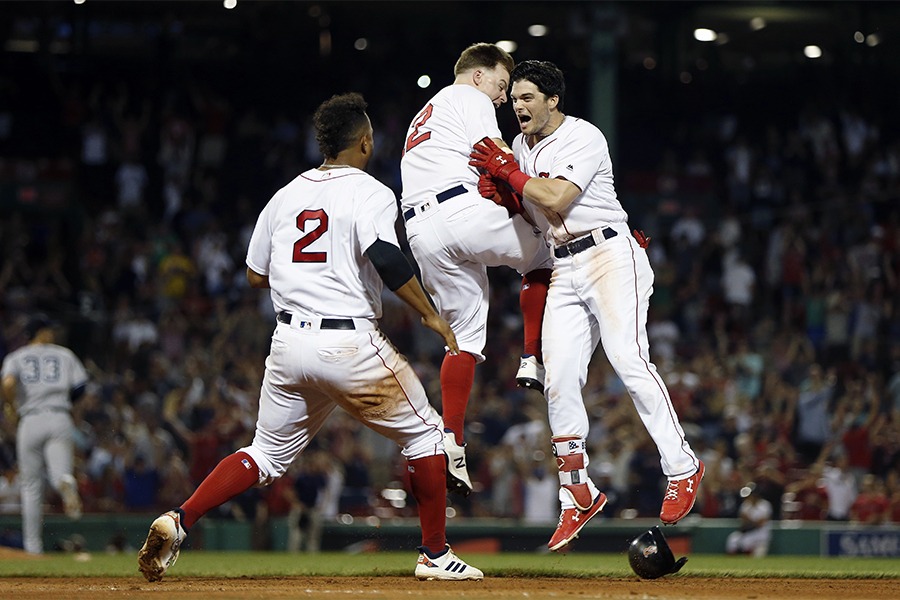 Did you wake up this steamy Monday morning with a spring in your step? As you took your usual commute in the morning wedged between fellow passengers on the MBTA, did you feel a sense of joy and possibility?

If you did, it was probably because you stayed up to watch the Red Sox complete a sweep of the Yankees in suitably epic fashion, with a tenth inning single from Andrew Benintendi. And that was after they’d come back in the 9th when they were down to their last out. Oh, and after they’d beaten the Yankees three other times previously. How bad was this weekend for the Yankees? As the Boston Globe put it, “The Yankees led 3-0 in the first inning on Thursday. The Red Sox outscored them 28-10 after that.”

Benintendi’s hit wasn’t some monster home run—instead, he put away the Yankees with a simple ground ball that snuck through into the outfield. Let’s just take a look at it, shall we?

Well, that was nice. How about from another angle?

Q. What‘s Fenway like during a walk-off to complete a 4-game sweep?
A: pic.twitter.com/mz8XvREzmF

Maybe a quick recap from ESPN?

The Yankees were one out away from avoiding a sweep by the Red Sox … but they lost in brutal fashion. pic.twitter.com/tl7FE1ph5w

Four on the board. That’ll do the trick. pic.twitter.com/dKHr0PrXe1

Despite the oppressive heat, is that a whiff of fresh fall air we detect? Feels like October is right around the corner.