A ribbon cutting at City Hall kicked it off. 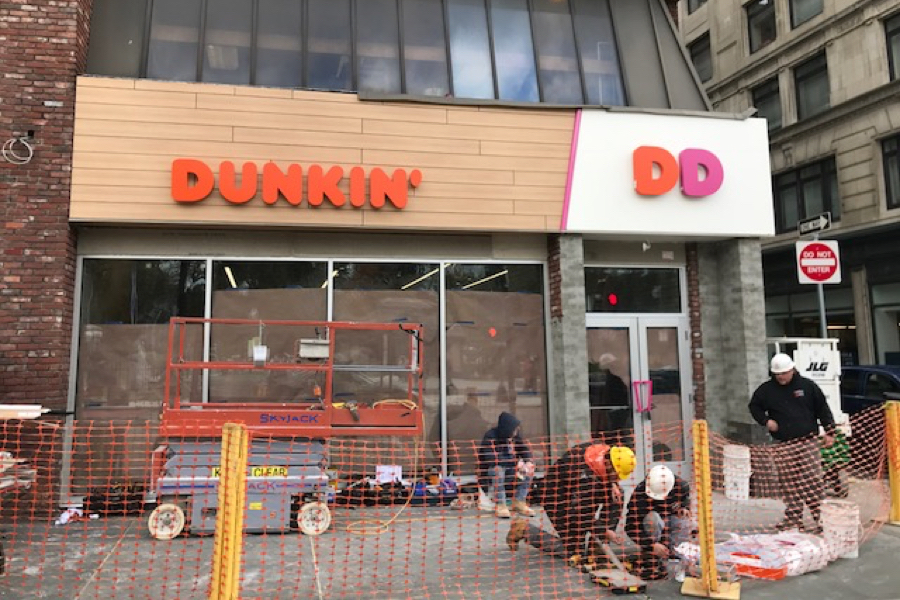 Dunkin’ Donuts is launching an “unprecedented” overhaul of its Boston locations, rebranding dozens of them as “Dunkin,'” and there is absolutely nothing you or I or anyone else can do about it.

The coffee chain, which got its start in Massachusetts, is announcing the spread of its new modern concept at a Dunkin’-themed extravaganza today from 11 a.m. to 1 p.m. at the newly remodeled Dunkin’ near City Hall, a roll-out complete with iced latte and Donut Fries samples, giveaways, live entertainment, a chance to “put your face on a donut,” a donation to the Greater Boston Food Bank, and an appearance from Red Sox shortstop Xander Bogaerts. CEO David Hoffman will also be there for the occasions.

According to a release ahead of the celebration, Dunkin’ Donuts will be bringing its modern new design and truncated logo to 30 of its Boston locations. It says it’s re-imagining its coffee shops with “a modern in-store experience and new technology to make running on Dunkin’ faster and more convenient than ever before.”

Ribbon cutting for the new ⁦@dunkindonuts⁩ store in Boston at City Hall plaza. It’s been rebranded Dunkin’ as the company considers dropping donuts from its name in this health conscious era. ⁦@XanderBogaerts⁩ will be here soon to serve up some cold brew! pic.twitter.com/7PnIpWHosg

The expansion of the “Dunkin'” concept comes as the company has undertaken a major re-brand, first testing the waters with a “Donuts”-less location in Pasadena before daringly opening one in the heart of Boston as well as in Quincy, presumably just to see how we’d react. In addition to the oddly truncated name, Dunkin’ new stores come complete with a new new vibe and new features like cold brew taps. For the record, while the new name downplays the donut aspect of the brand, the pastries are still for sale. It wasn’t immediately made clear which locations would get the Dunkin’ treatment.

It looks like, despite some trepidation from locals about the weird logo, no one got mad enough about it to stop ordering their daily iced regulars, because results from the test run in Boston, the market where Dunkin’ was most likely to be met with fiery outrage, must have pleased the execs in Canton. So “Dunkin'” is now, irreversibly, the future. Brace yourselves.