Even Diddy is sharing some love. 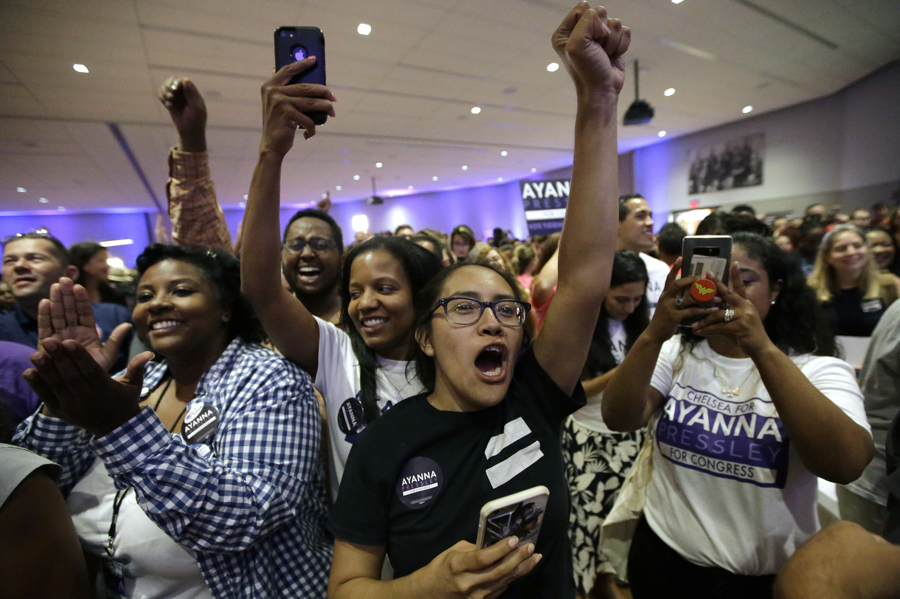 What a primary. Ayanna Pressley pulled off a stunning win in her bout with incumbent Congressman Mike Capuano, a result that the polls didn’t forecast, establishment figures didn’t bet on, and that national observers had watched closely for signs of a tectonic shift in the Democratic party. The Globe‘s editorial board called it a “political earthquake,” and they’re right.

The most widely shared reaction to her victory came in a video of the candidate herself. “Oh my god,” she says over and over as she embraces members of her team. One tweet that included the video had more than 9,000 retweets and counting by Wednesday morning.

Another photo making the rounds is of Pressley’s stepdaughter, Cora Harris. Snapped by a New York Times photographer, it shows tears of joy streaming down her face.

What an image in our story: Here’s Ayanna Pressley’s stepdaughter watching her mother claim victory and become the first black woman ever elected to Congress from Massachusetts. https://t.co/1K6KYIiteN pic.twitter.com/XE3jtcx3wm

But here are some of the others weighing in on the historic win.

Pressley, of course, received some congratulatory messages from Alexandria Ocasio-Cortez, the incumbent-toppling Democratic nominee for Congress from New York. The Boston City Councilor’s campaign had drawn comparisons to Ocasio-Cortez, and the two communicated during the race.

This photo was taken months ago.

.@AyannaPressley + I bonded over running while constantly told it’s “not our turn,” that we “weren’t ready,” “good enough,” or “experienced” enough.

In June, I won my primary. Tonight, she won hers.

And other powerful Democrats at home and around the country had kind words for her.

Congrats to my friend @AyannaPressley & her team on a hard-fought primary win tonight! Ayanna & I have worked together for years, & she’s a fierce advocate & powerful force for change. I’m looking forward to fighting alongside her in Congress. #mapoli

Congratulations to @AyannaPressley on her incredible primary victory yesterday! She’s showing the country that women of color will be seen and heard at a time when their voices couldn’t be more important. I can’t wait to see her make history in November!

When you give people something to vote for, they show up. @AyannaPressley won her primary campaigning on bold ideas that lift up those who haven’t been heard. Congratulations!

Congratulations @AyannaPressley. Couldn’t be more proud of you and can’t help but imagine the smile on Mama Pressley’s face watching you from heaven. She’s beaming.

.@AyannaPressley is the embodiment of courage + compassion. Take it from her @BOSCityCouncil seatmate: she’s going to be an incredible Congresswoman. I can’t wait to keep working together for Boston as you amplify all of our voices in DC #BYOC

Congratulations to @AyannaPressley @Rollins4DA @liz4staterep @NikaElugardo on your victories tonight. One office at a time, we make our government more representative of the people we serve, and prove that WoC not only deserve a seat at the table, but to lead it! #bospoli #MApoli

Including her opponent, and others who had endorsed him.

Congratulations to @AyannaPressley on your historic victory! I look forward to working with you to serve the residents of Boston. The #MA7 district is in good hands with your vision and leadership. #mapoli #bospoli

Big congrats to @AyannaPressley — she’ll be a force of nature in Congress just like she’s been in Boston. Look forward to adding her voice to the delegation!

Even Diddy showed Pressley some love.

Look who @AyannaPressley got props from pic.twitter.com/MIQQnSWNpO

As did a slew of other influential figures in media and politics.

.⁦@AyannaPressley⁩ is poised to become Massachusetts’ first Black woman in Congress. This primary season is full of women breaking glass ceilings and we are here for it! #PowerToThePolls https://t.co/Na2be4txB5

She will become the first woman of color to serve from Massachusetts in the United States House of Representatives. Ever.

Very, very proud of her. pic.twitter.com/UbgSLMYpI9

Listen to me. @AyannaPressley just shook up the world with her congressional victory. She just defeated a 10 term establishment Democrat and did it on her own terms with a progressive platform of real change.

We believe in you Ayanna! pic.twitter.com/3EAkKloALN

Congrats to @AyannaPressley, who I met when she was running @JohnKerry’s constituent services, and I was a college intern in the press office. Couldn’t be prouder than she’ll be representing MA in Congress.

Ayanna Pressley is the truth! https://t.co/GPfN7Wyelm