One Last Question: What’s the Best Word to Replace “Trump”?

Given today’s political climate, what’s the best synonym for the president's name? 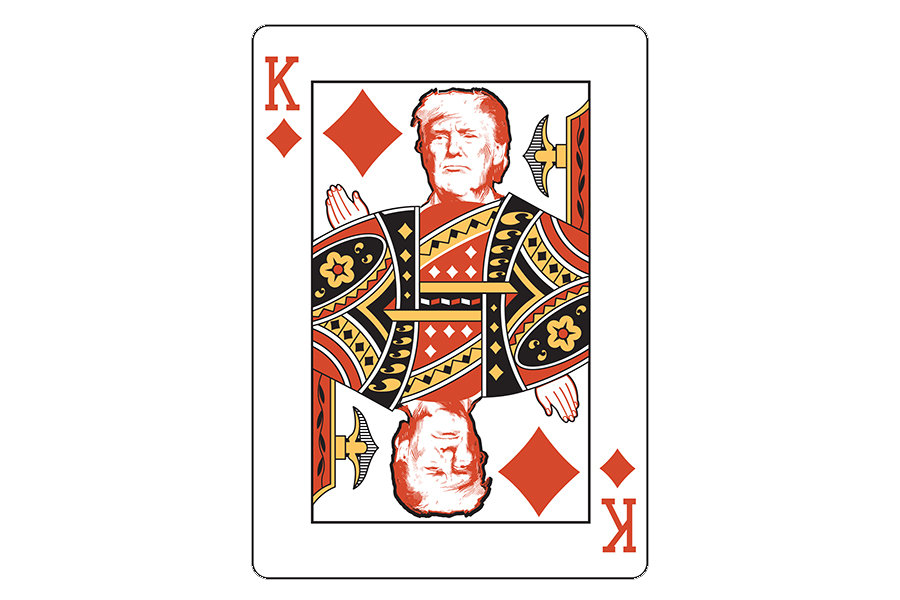 I was recently having my regular brunch with friends when one of them asked me not to use the word “trump” to describe how one thing surpasses another. I consider myself a pretty progressive person, but I was startled by the request and, much as I’ve tried, have been unable to come up with a synonym to make my friend feel more comfortable. Given today’s political climate, what’s the best word to replace “trump”?

Don’t take it personally, L.D., but your question made me laugh and groan at the same time, both because of the ridiculousness of this scenario as well as its familiarity. In response, I conducted a completely unscientific poll of friends and colleagues, and based on my findings, I have conclusively proven that every single human being in blue-state Massachusetts has experienced at least an awkward pause in conversation when the word “trump” is used. So there, we’re all nuts, end of story, yes?

Still, there’s something interesting going on for word nerds here. As anyone who follows late-night TV knows, the president’s surname derives from the German name Drumpf, which was changed to Trump a long time ago. The leap to the Anglicized name is not so great when you know that Trumpf means “trump card” in German. Try as you might to find a synonym—exceed, outshine, transcend—nothing else communicates that intangible frisson that comes from victory earned with a mix of skill and luck. It’s just a great word, so whoever it was who tweaked the family name must have foreseen some fortuitous branding.

Of course, there are other meanings for “trump”; if you go by the French tromper (to deceive), you’ll recognize a fake-news phrase like “trumped-up charges.” Or if you go by the Old High German trumba (trumpet), you’ll understand why the Oxford English Dictionary says it means “to break wind audibly.” Whichever definition pleases you most says a bit about your politics, but also a lot about how you need to just let some words be.

And that’s because what is not going on here is what is termed “semantic change.” That’s when a word, through historical events or trends, actually changes meaning. The word “gay” is the most obvious example, but “awful” used to mean “filled with awe,” and “Isis” once only referred to an Egyptian goddess and not a terrorist organization. “Trump” just means what it is, and let’s make it stay that way by using it normally. After all, it’s not like George W. Bush gets us all deranged about topiaries, or Charlie Baker makes us hungry for muffins, or Joe Kennedy III reminds us of the Kennedy family…oh wait, scratch that last one.