Hurricane Florence Will Have a “Minimal Impact” on Massachusetts, Forecasters Say

Don't go stocking up on water bottles and batteries just yet. 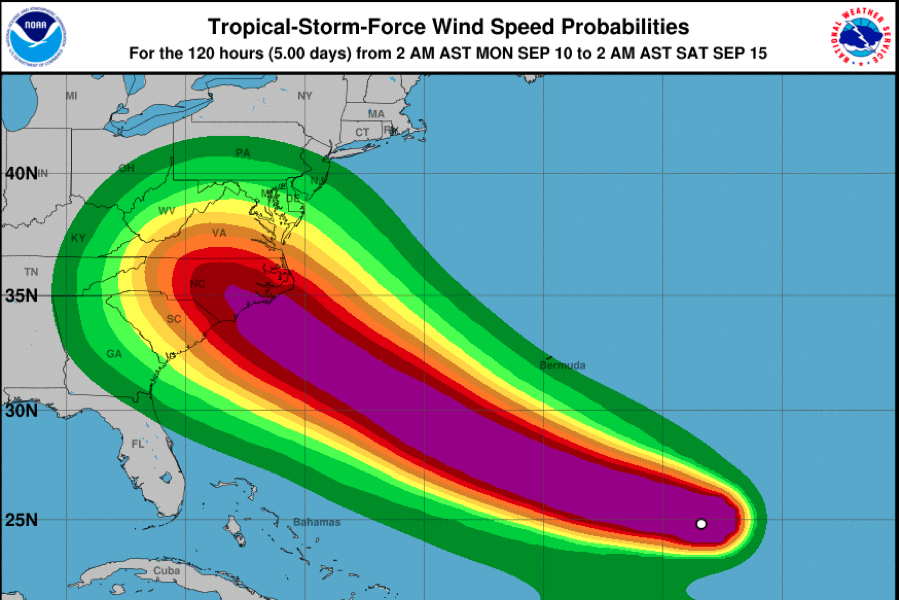 Screenshot via NOAA and the National Weather Service

As coastal communities up and down the East Coast prepare for the worst this weekend from Hurricane Florence, Massachusetts need not join them in filling up sandbags and stocking up on bottled water. While the storm is expected to batter an area spanning the Southeast to the Mid-Atlantic region, it will likely have little to no impact on Massachusetts, forecasters say.

“Probably worst case scenario is next weekend, maybe Saturday and Sunday, we get some remnants of it, but it’s really hard to say,” says Bill Simpson, meteorologist with the National Weather Service in Massachusetts,” who refers to what’s coming our way as at best “a minimal impact.”

A surge in the waters off the New England coast is expected to begin as soon as Monday night into Tuesday, and could lead to some especially high tides and dangerous rip currents, Simpson says, but that’s about it.

The combination of higher tides with new moon, swells beginning to impact from Florence, and persistent easterly winds will lead to some minor splash-over and coastal flooding with tonight’s high tides: pic.twitter.com/wy2UQVZIWW

Others will not be so lucky. As data on the storm grows more and more ominous—it will likely be a Category 4 hurricane at least and at this point seems unlikely to blow out to sea—mandatory evacuation orders have already been issued, and Virginia, North Carolina, and South Carolina have preemptively declared states of emergency, ahead of an anticipated landfall that won’t occur until roughly Thursday night.

“There is an increasing risk of life-threatening impacts from Florence: storm surge at the coast, freshwater flooding from a prolonged and exceptionally heavy rainfall event inland, and damaging hurricane-force winds,” the National Hurricane Center said in an update  on Florence’s progress at 5 a.m. Monday. “While it is too soon to determine the exact timing, location, and magnitude of these impacts, interests at the coast and inland from South Carolina into the mid-Atlantic region should closely monitor the progress of Florence, ensure they have their hurricane plan in place, and follow any advice given by local officials.”

September 10, 11 AM EDT: Here are the Key Messages for #Hurricane #Florence. You can always get the latest forecast at https://t.co/tW4KeGdBFb pic.twitter.com/IJ7OG63Zrp