It's a championship event for what's been dubbed the "fastest sport on skates." 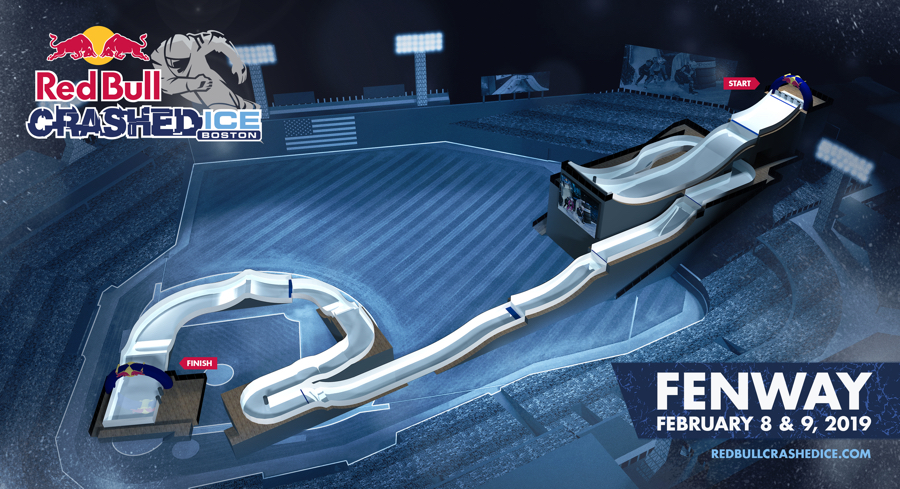 The two-day event on February 8-9 is part of the Ice Cross Downhill World Championship, a winter activity that dates back to 2001 and has been dubbed the “fastest sport on skates.” And for good reason: Competitors clad in helmets and pads fly downhill four at a time around curves, bumps, and jumps at speeds of up to 50 miles per hour, often slamming into one another in the process.

“Ice Cross Downhill is one of the fastest and most exciting winter sports and we are excited to be hosting it at Fenway Park,” Mark Lev, Managing Director of Fenway Sports Management, says in an announcement. “We want to thank Mayor Walsh and the City of Boston for supporting our ongoing efforts to present Fenway Park as a year-round entertainment destination and also express our gratitude to Red Bull for selecting Fenway Park to host the US stop of Red Bull Crashed Ice.”

According to the renderings released this week, the 2,000-foot course makes good use of the historic ballpark. The race is slated to begin with a steep drop from the right field bleachers, then snake its way into the infield, where it will travel around the bases and end at home plate. Over two days, men’s and women’s competitors will race, as will skaters from a junior league. The event will also feature a “high-flying freestyle trick competition.”

Tickets for the  go on sale September 19 at noon.

This is only the latest Red Bull event to take place in the city. The energy drink company’s gaming, cliff diving, and Flugtag competitions have also found a home here in recent years. Next weekend, Red Bull is holding its Rubik’s Cube World Championship at the Cyclorama. Fenway has also shown it’s more than up to to the task of morphing into a winter sports destination in the off-season. Back in 2016, it hosted a giant Big Air course for snowboarders and skiers, an event that featured a 140-foot-tall slope of snow.

If you’re unfamiliar with the sport, you really have to check it out: