As Frustration Mounts with Columbia Gas, Baker Declares a State of Emergency

Eversource will now take over the recovery. 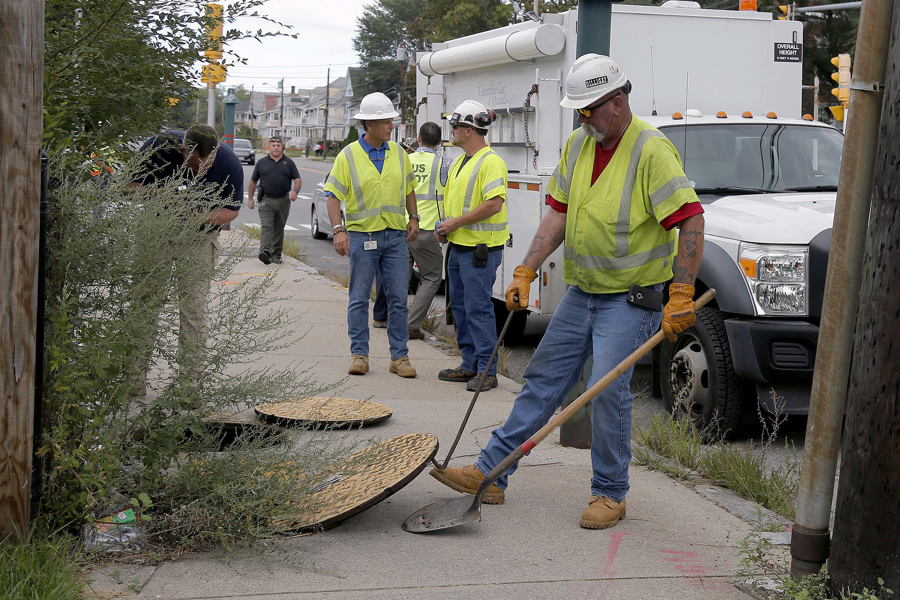 A worker with Columbia Gas pries the manhole cover open as they work to insure there are no gas leaks at the corner of Parker and Salem Street in Lawrence, Mass., Friday, Sept. 14, 2018. Multiple houses were damaged Thursday afternoon from gas explosions and fires triggered by a problem with a gas line that feeds homes in several communities north of Boston. photo via AP/Mary Schwalm

Gov. Charlie Baker declared a state of emergency in Lawrence, Andover, and North Andover Friday, a day after fires and explosions sourced to a gas line operated by utility company Columbia Gas tore through the communities.

The announcement will put the state’s Department of Public Utilities in charge of the recovery effort in an area that has seen thousands displaced, one man killed, and dozens injured. Eversource, another utility company, will now be tasked with completing the work necessary to let residents return to their homes, Baker said.

“The follow-up just wasn’t there,” Baker said in a press conference announcing the decision, adding, “I do believe this will lead to a better game on the ground.”

Lawrence Mayor Dan Rivera on Friday had especially harsh words for the company, which he said had not met its responsibilities and was not being forthcoming enough with information about the recovery. Columbia Gas was “the least informed and the last to act,” Rivera said, at times getting emotional about what residents of his city who are still locked out of their homes have had to endure. Rivera said the only information he has received from the company was that residents needed to turn off their gas and evacuate their homes. “It just seemed like there’s no one in charge.”

Addressing the media for the first time Friday afternoon, Columbia Gas President Steve Bryant apologized to his company’s customers and said gas still needs to be turned back on for 5,000 homes. He said he believed that work would be completed by Saturday or Sunday. Additionally, he said a claim center would be open for impacted residents Saturday at 9 a.m. at the Lawrence Public Library.

As for a cause for the chaos, CEO said he would defer to the results of an ongoing National Transportation Safety Board investigation. “This will obviously take time,” he said, adding, “We are extremely grateful for the community’s patience and understanding as well as the tremendous support we have received from first responders, law enforcement, and fellow utilities.”

.@ColumbiaGasMA CEO addresses media/public nearly 24 hours from first of the approx 70 fires/explosions in the Merrimack Valley on Thurs. #MerrimackExplosions pic.twitter.com/wJdXQ6e8fL

The announcement comes after intense criticism on many fronts for the company. It took several hours after the chaos in the Merrimack Valley began for Columbia, a subsidiary of an Indiana company called NiSource, to comment on the situation. A full day later, its leaders have still not identified a cause for the destruction, although officials suspect it was the result of an overabundance of high-pressure gas in aging pipes.

Among those who tried to pry answers from the company was Congressman Seth Moulton, who says even he couldn’t get them to return his calls.

Got the number of the Columbia Gas president and have tried him multiple times with no answer. Everyone wants answers. And we deserve them.

Just spoke with @SenWarren and @SenMarkey about the explosions and fires in #Lawrence, #Andover and #NorthAndover. She called it a mistake for Columbia Gas to not publicly address this incident right away pic.twitter.com/PWt99xEEJZ

Columbia had been working on repairs to the system this week before the fires broke out. Earlier this year, it requested a $45 million rate increase to cover the costs of safety fixes, the Boston Business Journal reports.