Another Day, another Storrowing. Will They Never Learn?

State Police shared a photo of a box truck that suffered the consequences under the Longfellow Bridge. 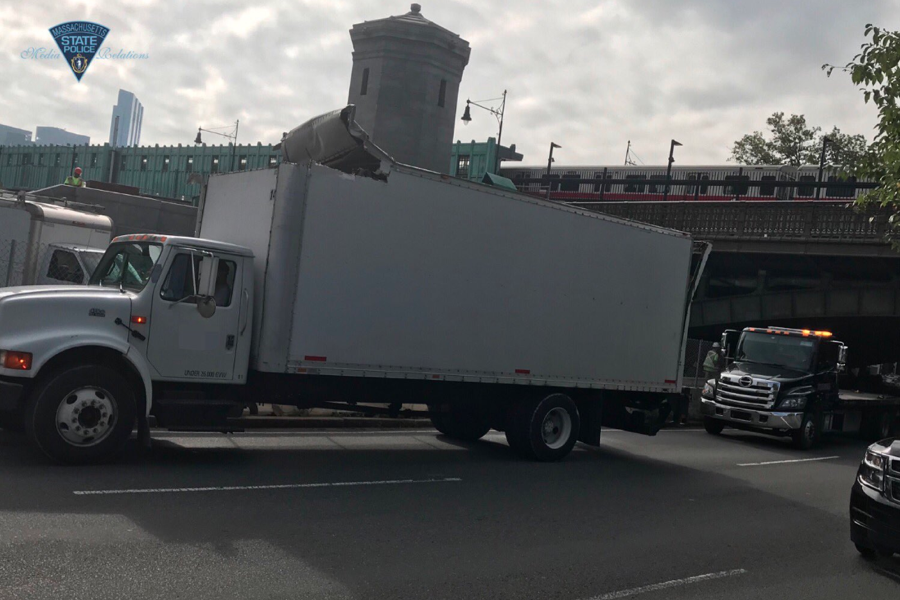 Hate to see it. Police documented yet another “Storrowing” on Friday, the latest victim a box truck that ended up striking the bottom of the low-clearance Longfellow Bridge.

The collision happened on the eastbound side of Storrow Drive near Mass Eye and Ear, leading police to warn of possible delays. There were no injuries, police said. The department shared photos showing the roof of the box truck had been smashed and bent upward—although it wasn’t all that bad considering some of the more serious consequences of Storrowings from years’ past, which have seen too-tall vehicles severely damaged, in some cases teetering onto their sides and/or dumping their contents all over the road.

In a post on Twitter, State Police said the right lane of Storrow Drive remained closed well into late morning as crews worked to remove the scrunched up roof so the truck could be safely driven away from the scene.

#MAtraffic update: Storrow Dr EB at the Longfellow, right lane still closed while roof is removed from truck that was #storrowed. No delays at this time. pic.twitter.com/SKY3tRc74w

All in all, this has actually been a pretty mild Storrowing season. There were no truck roof-smashings during Allston Christmas, which is prime time for this uniquely Boston no-no (Another Storrow-related problem that reared its head this year: bikers wandering off of the perfectly nice paths and ending pedaling in heavy traffic by mistake.) The city put some effort, including a social media campaign, into alerting undergrads and others moving from apartment to apartment this time of year about the hazards. Guess you can’t reach everybody all the time.