Boston’s new police commissioner on race relations, turf wars with the State Police, and the dumbest criminal he’s ever seen. 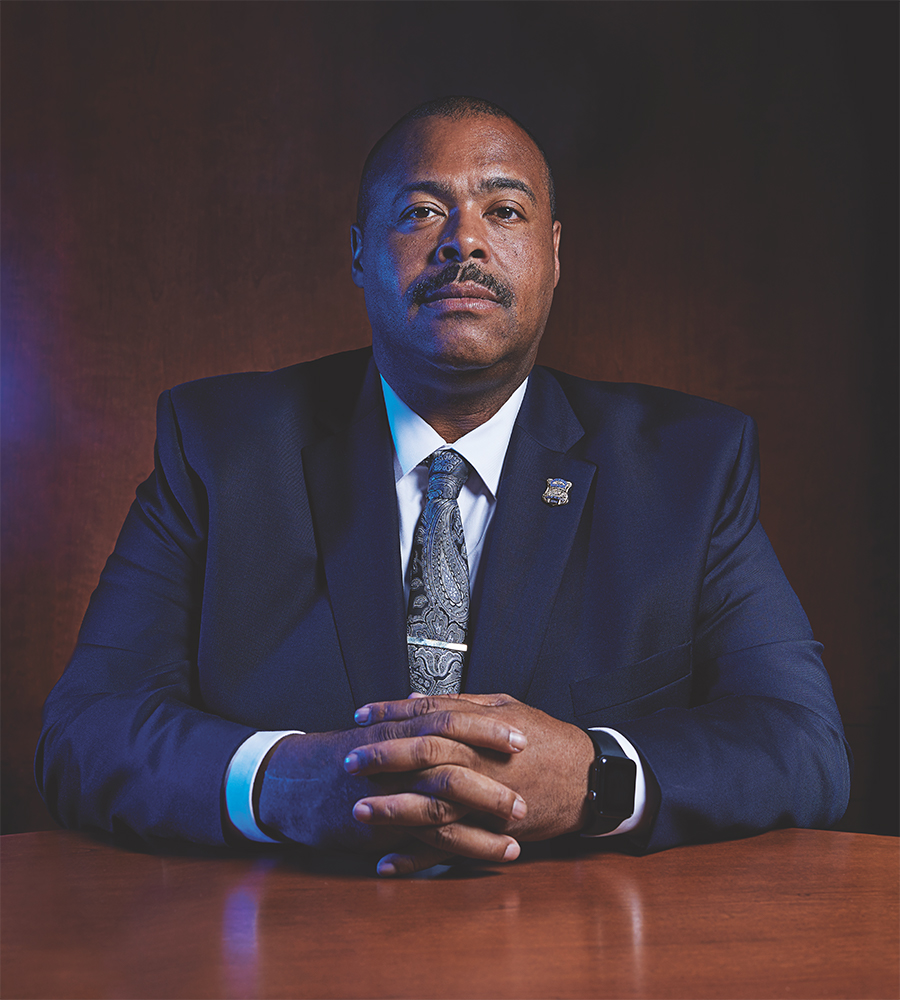 Boston’s latest police commissioner fancies himself a history buff—which explains why his new office on the fourth floor of the city’s police headquarters feels more like a museum than a top cop’s command center, adorned with decorative swords and plaques honoring the Tuskegee Airmen. It seems fitting, then, that William Gross is now making history of his own as the city’s first black police commissioner. It’s a role that comes with “tremendous pressure,” he tells me over a nearly hourlong interview, from thwarting would-be terrorists to making sure his officers don’t crack under the stress of the job. Still, he says, his biggest challenge so far as commissioner was keeping the news of his historic promotion a secret from his devoted mother.

I’d imagine you were pretty excited when you learned you’d be Boston’s next police commissioner. Did you celebrate with a special dinner or a few cocktails somewhere?

I swear to God, I went back to work. But I did have a plan in my mind that I wasn’t going to tell my mother and would surprise her with the news at the actual announcement. So I only told maybe three people because that’s how good of an investigator my mother is.

Did you manage to keep the secret from her?

I did. I remember going home the day of the announcement and telling her, “I need you to come to City Hall because I’m getting a National Community Policing Award and it’s a big deal.” And she was like “Ugh, what should I wear?” And I told her, “Wear your Sunday clothes. Trust me, wear your church clothes because there might be photographers there.”

She was shocked. I’ve only seen her cry twice in 54 years, and that day was one of them.

Have you had your first “oh, shit” moment on the job?

If you don’t have those types of moments, then there’s something wrong with you, especially if you really care about your brothers and sisters on the force and in the community. But the “oh, shit” moment is knowing that we’re constantly under threat of attack. Boston has been attacked twice by terrorism. So it’s important to advance the city’s preparedness.

How do you do that?

You know, it really is nice when everyone gets along. I know it sounds corny and all, but it really does work.

Under our model of community policing, it’s everyone: City Hall, clergy, first responders, institutions of higher learning, philanthropists. When we pull together, we have great success. We can look at what happened in the early ’90s. From 1990 through 1994, we had dozens of teenagers being killed every year. In 1994, everyone was operating in their own silos. Then we started listening to the community and started changing our police culture from warrior class to one that wears many different hats. And from ’94 to now, we’ve strengthened that model every year.

The Washington Post recently wrote an investigative story about unsolved shootings in American cities that concluded “no major U.S. city had a wider gap in arrest rates for white and black victims than Boston.” Does that concern you?

I’m not concerned with the Washington Post because we gave them the true numbers and they misrepresented them. I can honestly tell you that when we investigate homicides, it doesn’t matter if you’re white, black, or purple. We’re going to investigate it to the best of our ability. Do we have evidence? Do we have witnesses? Can we go forward with a case? I think the Washington Post was quite disingenuous after they were given the facts and circumstances, and I think they forgot about a man called the district attorney. Our district attorney, Dan Conley, doesn’t see color, either. We don’t bring a homicide to him and say, “Hey, this is a white guy, Dan.” It comes down to cold, hard facts, evidence, and witnesses.

You moved to Dorchester as a 12-year-old from rural Maryland in 1975, around the time school busing began here and the city was rocked by race riots. What was that like?

Not to swear, but if you want to talk about “oh, shit” moments, that was an “oh, shit” moment. I’m from Hillsboro, Maryland, 60 miles from Baltimore. Back then it had a population of about 160. I was used to a farmhouse and I remember walking into this box of an apartment in Dorchester and thinking “Where’s the rest of the house?” And on the first Sunday I lived there, I was sitting out on the front stairs of the building, a goofy country kid saying hi to everyone who walked past. And I remember a brother walking down the street, and I said, “Hey, how you doing,” and he spoke back to me in a Haitian Creole accent. He was like “Hey. How. You. Doin’.” And I was like “Mmmm….” In Hillsboro there were only black and white people. There were no Lithuanian people. There were no Puerto Rican or Dominican brothers. I was walking around Boston like a tourist. I remember seeing dreadlocks and Jheri curls for the first time. It was crazy.

Were you aware of the racial tensions in the city?

Oh, yeah. I arrived in September 1975 and attended Oliver Wendell Holmes. Kids from Southie were being bused into Dorchester and kids from Dorchester were being bused to Hyde Park and Southie. So, yeah, there was tension. And some teachers just gave up. I’m not going to name names, but they’d say, “I’ll teach you something you can really use. I’m gonna teach you how to play poker.” Other teachers wouldn’t give up—they really loved their profession. It was tumultuous times, but I have to say that Oliver Wendell Holmes had school spirit. No one in the neighborhood bothered the white kids who were bused in because people knew they were from the Holmes.

When you decided to become a cop in the early 1980s, did you faces challenges as a black officer?

Frankly, when I came aboard in the ’80s it was 50/50 for me. Half my friends were like “You’re crazy, they hate us, what are you doing?” Some people, who weren’t my friends, would say, “Uncle Tom” or “sellout.” But it was the older guys who had busted their butts to make sure there was justice and equality who said, “Go ahead, but when you get in there, make changes.” As I often tell people, when I joined the police, if anyone ever told me I’d one day be commissioner, I would have looked at the color of my skin and replied, “Unattainable goal with a brick ceiling.”

Do you feel the pressure of being the first black commissioner?

Yeah, I feel it. There are definitely haters out there. Just read the comments. I understand the historical significance of being the first African-American commissioner in Boston. So yes, there’s pressure, because there’s tremendous pride in being here and I didn’t get here alone. And I’m not just representing the African-American community, I’m representing the good people of Boston who have fought for justice and equality. Look, I know it’s not going to be the land of milk and honey. There are still prejudiced people and people who wish you ill intent. So yes, tremendous pressure. But guess what? It’s a big man’s game, so let’s go.

How long have you had your mustache?

What’s the best movie or TV show about cops?

In the Heat of the Night. And some of my other favorites were definitely Barney Miller and Hill Street Blues.

Finish this sentence: The dumbest criminal I ever arrested…

Left his license in a stolen car. It was a nice car, too. It was South Boston, and we saw the kid jump the fence into a construction yard. And we found him in a Caterpillar faking like he was sleeping. He acted like he woke up when we got there and said, “Oh, I was just getting an early start to work.” And we were laughing and we were like “That’s BS, dude, you’re busted, you stole the car.” And he got all defensive, saying he was a hardworking man and this wasn’t right. Then I held up his license. So that was fun.

Speaking of your predecessor, Bill Evans was quite vocal before leaving the BPD about the ongoing turf war with the State Police over jurisdiction in the Seaport. How do you see that playing out?

Trust me, I know that it’s supposed to be this competition and everything. And nothing against Commissioner Evans, because he’s absolutely right: There should be concurrent jurisdiction. For me, I worked for a combined eight years in the gang unit and drug control unit, which were multi-jurisdictional agencies that worked with state, local, and federal law enforcement agencies. I know how agencies work together. So there’s a lot of work to be done, but we’ve been having some very good conversations.

How do you see it playing out?

As of now, Boston Fire can go to the Seaport. Boston EMS can go to the Seaport. But if Boston Police go, it’s “Whoa, not you.” We should all be pulling together. We should have concurrent jurisdiction, and this time we should not be discussing segregation. There are bad guys that love for us to fight each other. The Seaport is becoming more and more populated, and nobody has a better community policing model than we have. Look, you’ve heard me talk about domestic preparedness: Two terrorist attacks have happened in Boston. So you’d have three law enforcement entities in the Seaport—Massport, State Police, Boston police—and more eyes and ears better serve the people in our commonwealth and city. So we’ll continue to have those conversations.

Boston Police has in recent years lost several officers to suicide. You’ve said that one of your priorities as commissioner is “officer wellness.” What do you mean by that?

This is a tough job. We wear many different hats—we’re psychiatrists, sociologists, mentors, teachers. And there’s a lot of negativity that comes with the job, and that’s being compounded by anti-police sentiment from across the nation. And that can weigh on you. Our divorce rates are through the roof. We tend to hold things in because We’re the protectors. There’s a machismo to the job. That’s not good. If you keep holding things in, it’s going to manifest into suicides or not making the right decision or it can lead to dependencies. So a simple question is, who would you rather have serve you: an officer that is sound in body and mind, or one that is having problems?

But as you mention, there is a sort of tough-guy nature or machismo to the job. So how do you overcome the stigma of talking about depression or stress in the force?

Through a great peer-support unit that teaches us how to talk about things and that makes it clear you’re not weak if you’re having problems. If an officer does come forward, we as the upper management need to make sure we don’t ostracize him or her. And I can guarantee you our command staff will support each and every officer if they need help, and their families as well. Because there’s nothing like Easter morning going to West Roxbury to the house of a friend you’ve known since 1983 who has committed suicide. Officer wellness just means taking care of the people that serve.