The Arizona senator, who is now at the center of the Brett Kavanaugh Supreme Court confirmation, spoke at City Hall Plaza today. 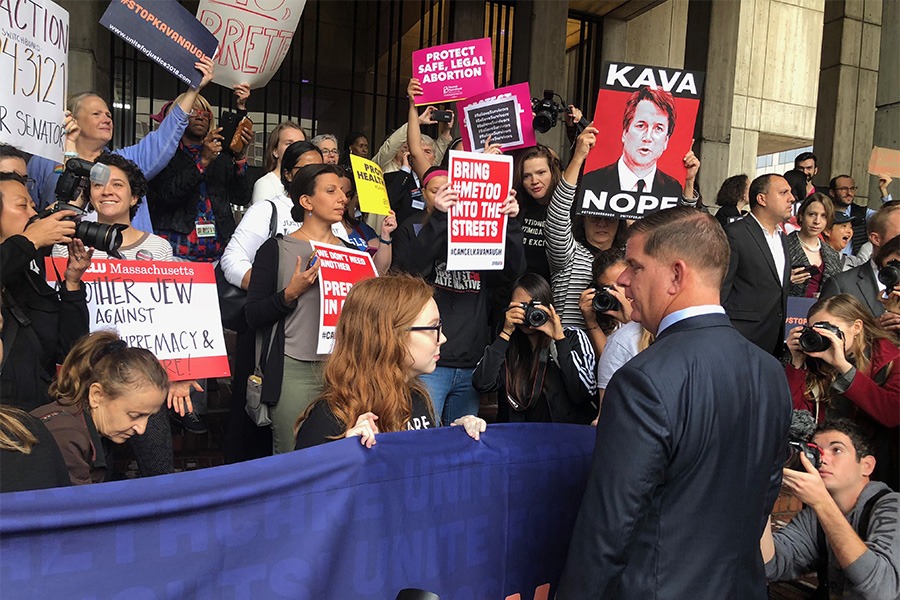 Will they change Jeff Flake’s mind on Brett Kavanaugh? It’s too soon to say. But plenty were willing to give it a shot on Monday, turning out by the hundreds to send a message to the Arizona senator, a crucial vote in the confirmation of the judge to the Supreme Court, when Flake passed through Boston on Monday for the Forbes Under 30 Summit.

Flake spoke during an on-stage interview at City Hall Plaza—not at Emerson, as had been planned, due to security concerns.

“Hey, hey. Ho ho. Kavanaugh has got to go!” the crowd chanted, waving signs that called for protecting abortion rights and snuffing out rape culture, and urged the Senate to reject Kavanaugh, who has been credibly accused of sexual assault while he was a teenager.

Absolutely electric speech here in Boston from @Ocasio2018. Wow. (Here’s the last part of it) pic.twitter.com/A8LNWvmUQL

“I still believe Anita Hill, I believe the women of the Boston Fire Department, and I believe Dr. Christine Blasey Ford” – @AyannaPressley pic.twitter.com/MY3AoZKtmm

A surprise guest: Olympic figure skater Adam Rippon. “This is the America that I believe in,” he says. pic.twitter.com/4pWtpsEDBJ

A lone dissenter made her way to the front, but failed to get a reaction to her shouts of “Vote Kavanaugh.”

We’ve got at least one MAGA hat dissenter in the crowd. Keeps yelling “vote Kavanaugh!” pic.twitter.com/5TyHCfXFWk

Protester Lisa Birk said it was more than the sexual assault allegations that made Kavanaugh unfit for the Supreme Court: “I don’t have to agree with him, but I do not believe he has the judicial temperament or standard of telling the truth to sit on the Supreme Court.” She pointed out that she had ideological differences with Neil Gorsuch, President Trump’s other Supreme Court appointment, but that she hadn’t objected as much to him “because he didn’t lie, dissemble, or dodge questions.”

Speaking to reporters before the official program began, Mayor Marty Walsh said, “The whole committee’s job was to vet the candidates and they clearly didn’t do it in this case, and there’s still a lot of work to be done. You’re talking about having a person appointed to the Supreme Court that’s going to be there for 30 or 40 years, and clearly there’s issues.”

Jeff Flake, introduced as “the most newsworthy man in the world,” is here. pic.twitter.com/yilr0LtcqL

Flake and Forbes editor Randall Lane did not address the rally that had taken place in the morning when the senator took the stage inside the event, access to which was limited to press and those who had paid for tickets.

Several attendees came carrying paper signs with the names of sexual assault survivors from Arizona, the state Flake represents. They later stood silently and held them in the air during his brief Q&A.

As promised, about a dozen people are now standing silently, holding up the names of Arizona sexual assault survivors as Jeff Flake takes questions in Boston. pic.twitter.com/SSiozj1Cvm

“We decided we all wanted to get together and use this as a platform,” says one of them, Kristin Van Busum, the Boston-based CEO of Project Alianza. She says she and the other silent protesters met at the rally. “All these signs are women who have come forward and we’re standing in solidarity with the survivors.”

Another, Northeastern student Ellen Sciales, says she attended the rally but was disappointed it wasn’t timed to coincide with Flake’s appearance, so he could hear them. “It’s nice there were people inside who could also show their solidarity,” she says. “I believe survivors and I believe Dr. Ford, and that’s why I did this.”

Flake’s stop in Boston comes after a remarkable couple of weeks in Washington, as he is among the handful of senators who had said they were on the fence about whether to endorse sending Kavanaugh to a lifetime seat on the nation’s highest court. The senator voted to send the confirmation process out of the Senate Judiciary Committee, but delayed a vote in the full Senate by a week to allow the FBI to investigate allegations of sexual assault against the nominee.

Before that decision, a viral video ricocheted around the internet showing two female sexual assault survivors confronting Flake in an elevator. Flake, who had said in an earlier statement that he planned to vote in favor of Kavanaugh’s confirmation, changed his decision shortly thereafter. ““I just knew that we couldn’t move forward, that I couldn’t move forward without hitting the pause button,” he told 60 Minutes on Sunday.

Let’s be real here, absent some major revelation by the FBI, Flake seems very likely to vote for Judge Kaganaugh. And that will in all likelihood be that.

But the elevator altercation has been seen as a sign that Flake is sensitive to being reminded of the impact his decision will have on women and sexual assault survivors in particular—or at least, that he doesn’t want to look like a monster. So could a big, loud, impassioned crowd in Boston help change his mind?

A whole lot of people were at the very least willing to try. 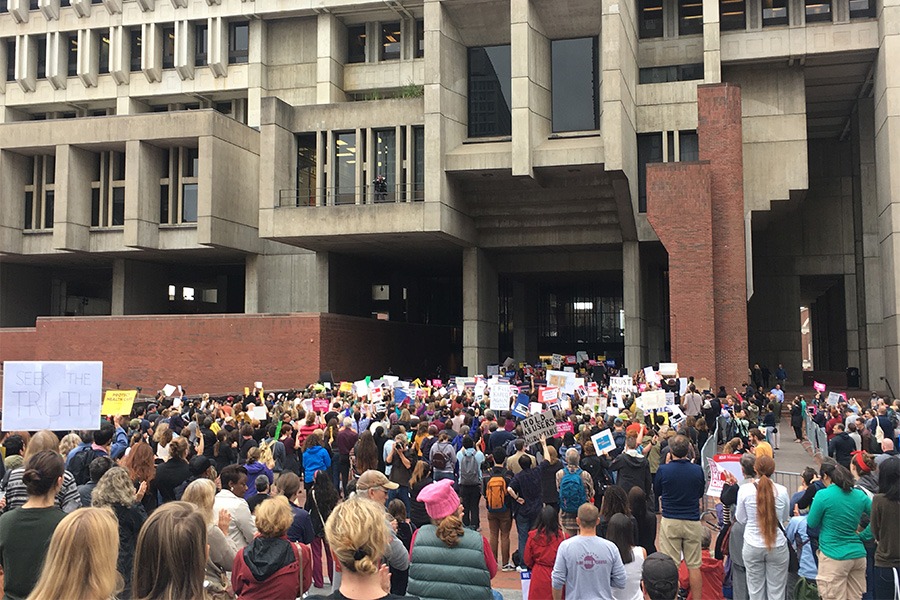