The Yankees Crossed a Hotel Strike Picket Line in Boston

"This is a slap in the face to all Bostonians," says Brian Lang, president of Unite Here Local 26. 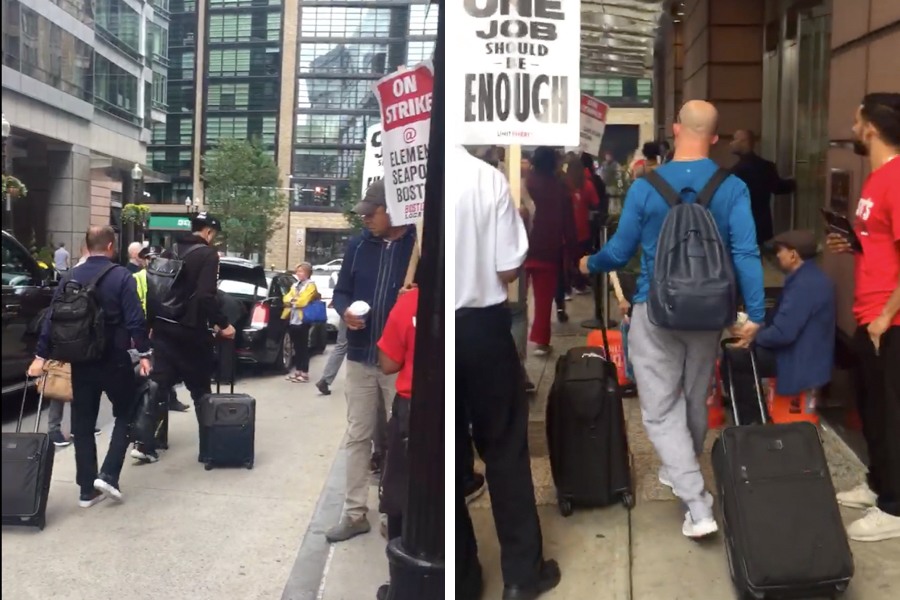 As Boston hotel cleaners, cooks, servers, and other employees chanted and marched their way through day two of their historic strike on Thursday, they spotted some infamous guests walking through their picket line at the Ritz-Carlton: The New York Yankees.

Workers at seven of the city’s Marriott-run hotels who are calling for more stable schedules, a living wage, and more on-the-j0b protections, have been on strike since Wednesday morning. They spent Thursday appearing outside the entrances to the hotels chanting “Don’t check in! Check out!” and urging potential guests to stay elsewhere until the hotel company meets their demands.

But that message, it seems, was lost on the Yankees. Video obtained by Boston shows several players, including outfielder Brett Gardner and pitcher Dellin Betances, rolling their suitcases past the protest as workers paced, waved signs, and played the drums on overturned buckets.

Unite Here Local 26, which represents the hundreds of striking workers, is not happy about it, and they’re urging other teams who come to town to steer clear of Marriott properties.

“We understand that there’s a very intense rivalry between the New York Yankees and the Boston Red Sox, but quite frankly we’re a little outraged they would take it out on working class people who are out here sacrificing to improve their livelihoods,” Unite Here Local 26 President Brian Lang says in a phone interview. “This is a slap in the face to all Bostonians.”

Players did not appear to have any trouble getting inside the hotel. In one of several videos shared with Boston, someone can be heard saying, “Let him through,” as a player snakes his way through the crowd. The Yankees did not immediately respond to a request for comment.

The union also represents workers at Fenway Park, who are not on strike.

“The Red Sox would never spit on their fans the way the Yankees are,” Lang says. “We believe just like David Ortiz said, ‘This is our city,’” he adds (paraphrasing, of course). “We’re proud of it, and who are they to be coming in and spitting on a message that we’re trying to bring through for all the people of Boston?”

Marriott International has said it is “disappointed” with the union’s decision to strike and has said its hotels will remain open even while workers have walked off the job.

Update: In a statement to SB Nation, the MLB Players Association has spoken out in favor of the striking workers: “From what we understand, these workers have been trying to negotiate a fair contract for more than six months. They deserve to be heard and deserve our support.”