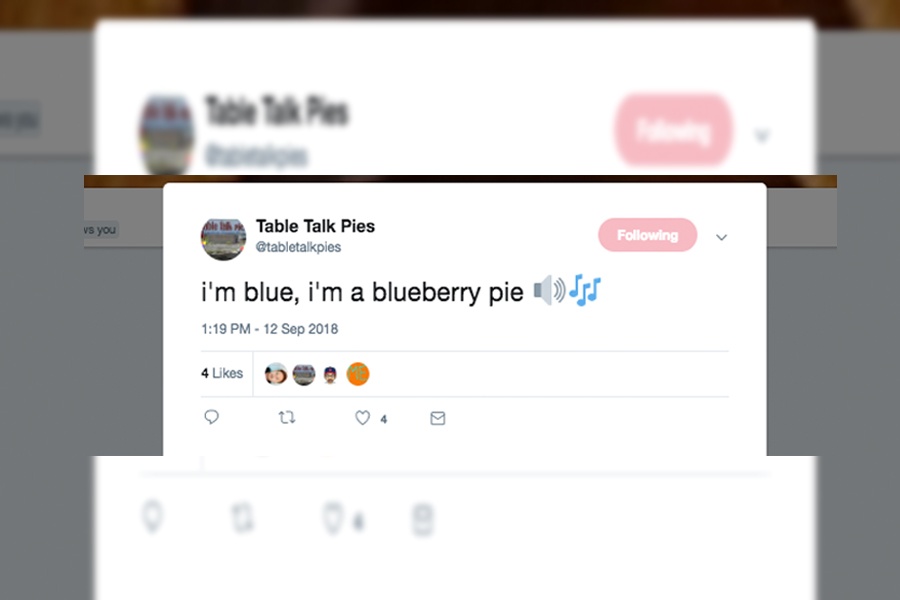 To the tune of “Blue (Da Ba Dee)” by Eiffel 65, obviously / Image via Twitter

Scrolling through Twitter is not a joyful experience for me. In fact, the deluge of soul-crushing headlines often makes me deeply sad. Yet I continue to scroll—out of habit and for work reasons—every single day. And each day, there is only one thing that can take the edge off of this form of torture I inflict upon myself: @TableTalkPies.

hey whip that pineapple into shape! any shape

It is perfect. It is strange. Sometimes it’s as comforting as the sight of a stack of Table Talks in your local grocery store, and as cozy as the company’s newly opened wood-paneled shop in downtown Worcester. Other times it’s just straight up weird.

It is also…not run by Table Talk Pies.

“I have no idea who it is. We can’t get them to talk to us,” says Caitlin Enck, manager of Table Talk’s brick-and-mortar pie store, and handler of the company’s Instagram account.

“I think everybody who works here finds it kind of entertaining,” she says. “My opinion on it is I just want to know who it is. As far as I know, no one knows.”

Massachusetts natives have no doubt crushed a Table Talk Pie or two on their way home from Market Basket. Founded in 1924 by a pair of Greek immigrants, Table Talk is best known for its 4-inch snack pies—you know, the ones sold just about everywhere. But the almost century-old company has recently been riding a wave of nostalgia to become ~hip~. Its shop is stocked with branded apparel, and pie flavors have even been adopted into Wormtown brews.

“They kind of steal from our Instagram and Facebook and put a funny little twist on it,” Enck says.

The account’s first tweets were sent in November 2015, and for the most part, have maintained an offbeat brand of zany cheerfulness with words of wisdom (“imagine a good day but it’s just the best”) and weather-related observations (“the sun is natures sweater good looking weather this weekend!”).

There are more jumbled messages, too. Some are accompanied by seemingly unrelated emojis.

look at this pineapple fact

Even the account’s profile picture is curious—the photo shows a Table Talk Pies truck from a distance. It’s parked behind what looks like a gravel lot and a chain link fence.

“I don’t know if it’s an employee, a former employee, a fan. We have no idea,” says Jayne Cormier, executive assistant to Table Talk Pies president Harry Kokkinis. “They will not give us any information. We have said ‘Can you please call us?’ and nothing.”

A recent photo tweeted during George’s Coney Island’s 100th anniversary block party could be a clue (or a red herring) to identifying the tweeter. The photo shows a hand with painted nails holding up a 4-inch Table Talk pie.

we are out here! #coneyisland100 pic.twitter.com/wkLekQbjmN

“One of my good friends sent me a screenshot and was like ‘It’s a girl!'” Enck says. “All the women who work here—I was looking at their hands the other day.”

And still nothing. I sent a direct message to @TableTalkPies and didn’t get an answer—or even a read receipt.

“It’s funny, don’t get me wrong,” Enck says. “That’s the thing. They’re not being offensive so it’s hard to get appalled. They’re just kind of being goofy.”