Remnants from the mammoth storm will bring lots of rain to the region. 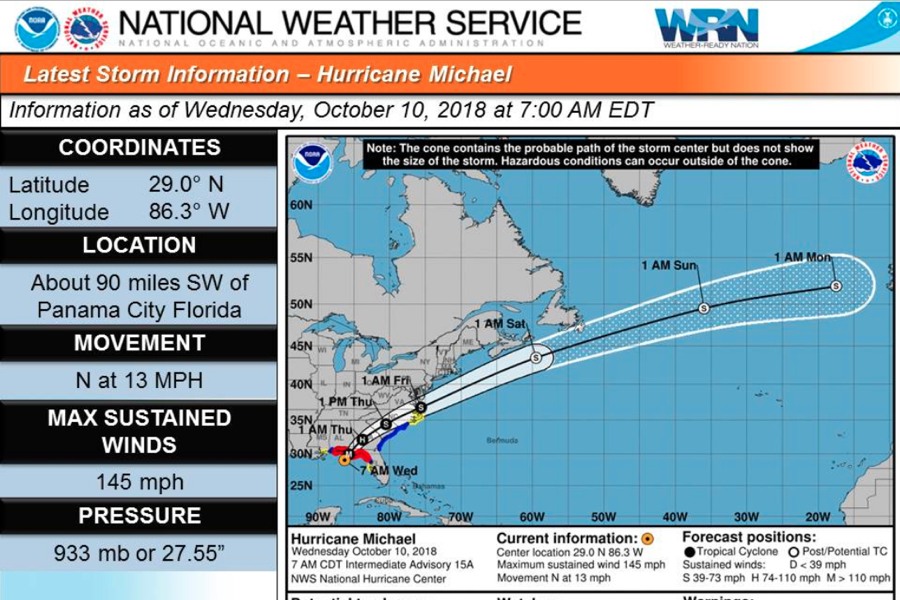 The worst of Hurricane Michael, now a Category 4 storm, will hit the Florida coast and Southeast this week. But we’ll feel it all the way up in Massachusetts, too.

The storm is slated to slam into the Florida Panhandle mid-day on Wednesday, then travel up the East Coast before trailing off into the Atlantic, whipping some of its wet and windy remnants into New England by Friday.

Heavy rains are expected here, especially in southeastern part of the state including the Cape and the Islands. A cold front is already on the way to Massachusetts from the Midwest, which could bring showers by Wednesday night. And forecasters believe Michael and the storm system could coalesce.

“We have a combination of things up in our neck of the woods,” says meteorologist Kim Buttrick of the National Weather Service in Norton. “The main threats from Michael are rain, and then there is the marine impact for the shipping industry offshore.”

It’s forecast to be a significantly less serious event here than in Florida, where there are warnings about potentially catastrophic damage and life-threatening conditions. But still, heavy rainfall could lead to some inland flooding in the state. Coastal flooding is not expected to be severe but there could be some serious waves.

“We’re more concerned with freshwater from heavy rainfall, especially in the New Bedford and Fall river area,” Buttrick says. “If there is a lot of rain, those cities and towns could have a hard time receiving that amount of rainfall in their sewer systems, so we’re looking at poor drainage flooding.”

Wind gusts Friday could reach the low-20 mile per hour range in Boston, or into the high 30s in the South Shore, the NWS predicts.

“This is a large storm. It’s going to impact much of the East Coast,” Buttrick says.