One Last Question: Where Should I Watch the Head of the Charles?

It’s hard to fully appreciate the races when you don’t know much about rowing. So where along the course can a casual viewer get the best thrill? 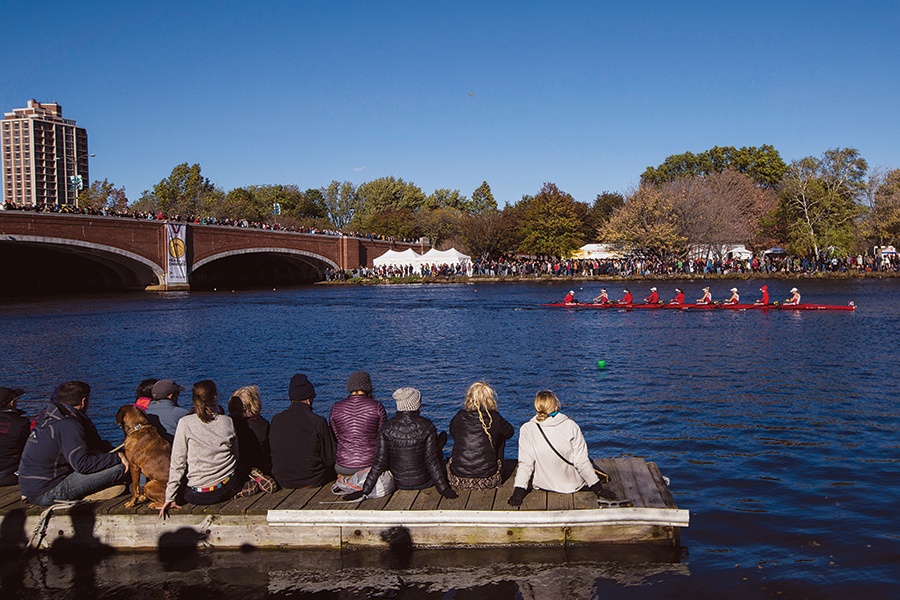 Q: I’ve been to the Head of the Charles a few times. It’s nice to see the boats go by, at least when the weather’s good, but it’s hard to fully appreciate the races when you don’t know much about rowing. So where along the course can a casual viewer get the best thrill?
—B.H., Watertown

Full disclosure: However much I like to think I know a lot about a lot of things, I grudgingly admit a common ignorance about the finer details of rowing. And yet I, too, love the Head of the Charles, for the same reasons you do: The speed of the sleek sculls is exhilarating, the noble exertion of world-class athletes is inspiring, and the urban riverine course is dazzling in almost any weather—remember that magical snowfall of October 2009? Oh, who am I kidding with all of this high-minded hogwash…here’s what I like about races featuring large, expensive vehicles: action, drama, crashes! So if you ask me, and you did, head to the Eliot Bridge.

Built in 1951—14 years before the inaugural Head—this concrete structure connecting Allston and West Cambridge is the last bridge the boats need to clear before they make the mad push for the finish line. But before crew teams even have to steer through its brick-faced arches, they must navigate a treacherous, 180-degree hairpin turn in the river that has rattled competitors for decades. Imagine the panic of swinging this tough curve, going through the most difficult of the bridge’s three arches, while trying to keep speed for a strong finish, and you’ll understand why a writer for Rowing News once compared the experience to crossing six lanes of traffic on an L.A. freeway at 78 miles per hour, in the vain hope of not missing your exit. Even Yasmin Farooq, an Olympic coxswain during the 1990s, has written that the Big Turn is “a mentally disturbing situation” and the Eliot Bridge is “a very nasty spot.” Indeed, the past 50-plus years have been filled with incidents of boats ramming each other, veering toward shore, abruptly ceding once-insurmountable leads, and on rare occasions popping a leak and sinking into the Charles. Sounds pretty darn thrilling to this lazy landlubber!

Based on these morbidly fascinating anecdotes, I feel confident that you’ll have a grand time at the bridge, but with one caveat: You’ll hardly be alone, as it’s one of the course’s most popular spots. Because no matter what spectators and genuine rowing experts may claim, just about everyone loves watching failure as much as triumph.