"Arrogant women" are rallying behind the senator after John Kelly's already infamous email. 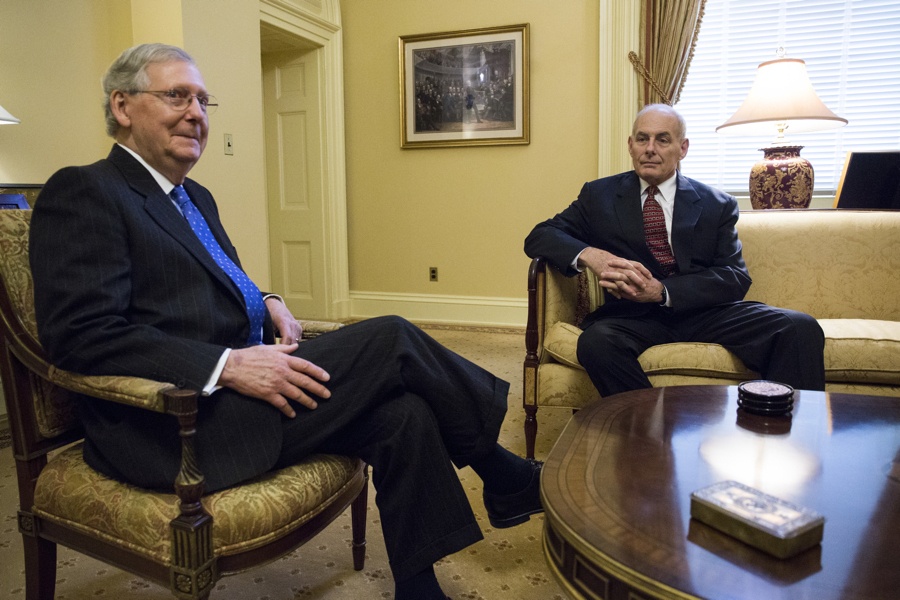 It’s a familiar formula now: A prominent Republican dashes off a quick insult about the behavior of Elizabeth Warren, and in the blink of an eye, it’s a campaign slogan, a T-shirt, a bumper sticker, a rallying cry.

Already, less than a day after an email emerged from Trump Chief of Staff John Kelly in which he called the Massachusetts Senator an “impolite arrogant woman,” it’s become a new catchphrase for her supporters. The email, unveiled by Buzzfeed via a freedom of information request, referred to a phone conversation Kelly, then Secretary of Homeland Security, had with Elizabeth Warren in the chaos that followed the rollout of the travel ban, and the administration’s response to a court order that temporarily halted the ban on travel from several Muslim-majority countries.

“Absolutely most insulting conversation I have ever had with anyone,” Kelly wrote to his senior counselor Kevin Carroll in February, 2017. “What an impolite arrogant woman. She immediately began insulting our people accusing them of not following the court order, insulting and abusive behavior towards those covered by the pause, blah blah blah.”

(The email records, interestingly, also show some chatter among top officials about Marty Walsh’s appearance on The Daily Show to talk sanctuary cities).

Right on cue, Warren’s legion of supporters in Massachusetts and elsewhere have begun the jiu jitsu move of repurposing the insult, proudly declaring themselves “arrogant women.”

“Retweet if you’re proud to be an impolite, arrogant woman,” wrote Shannon Watts, the founder of the activist group Moms Demand Action, on Twitter Thursday night, along with the hashtag #BlahBlahBlah. By Friday morning, 5,000 people heeded the call.

Retweet if you’re proud to be an impolite, arrogant woman. #BlahBlahBlah https://t.co/7IXQH9adaG

(Makes note to ask @lynnstahl7 to make a new t-shirt saying “Impolite Arrogant Woman” on the front and “blah blah blah” on the back.)

You may recall the use of this same tactic when Sen. Mitch McConnell hassled Warren about her violating decorum on the Senate floor while criticizing now-Attorney General Jeff Sessions. “Nevertheless, she persisted,” McConnell said, explaining his decision to enforce Senate rules to get her to stop speaking. The phrase is now a staple of her speeches, it inspired a book, and it can now be found on shirts (options include a “PERSIST” logo with rainbow-colored text and another with “persist” written in Spanish), mugs, buttons, tattoos, and more.

These guys should really start charging for their services.

Reading the room, Warren on Thursday night responded to the Buzzfeed scoop with a fundraising email. In it, she describes the call with Kelly from her perspective, recounting the difficulty she had getting him on the phone in the first place to discuss the many people who’d found themselves detained at airports amid the chaos after Trump’s executive order. Emphasis hers:

Was I tough on John Kelly in that phone call? You bet I was. And apparently he didn’t like it.

According to an email he wrote about our conversation just afterwards, which was just released, he called me “an impolite arrogant woman.”

“Blah blah blah.” That’s all he had to say when he was called out for breaking the law and destroying lives. And I don’t know about John Kelly – but there are some men who can only hear “blah blah blah” whenever a woman’s talking. One of his aides wrote back, “Too bad Senate Majority Leader McConnell couldn’t order her to be quiet again!”

Clever. Well, Mitch McConnell can’t shut me up – and neither can John Kelly. (He can’t even get Donald Trump off Twitter, and as far as I can tell, that was his main job description when he took on the role of White House Chief of Staff).

It’s been a long two years since Donald Trump became President. But the night the Muslim ban started will be seared in my brain forever. That night, I went to Logan Airport to join the protest. It was an incredible sight – a sea of people rushing to East Boston to make their voices heard. There’s nothing impolite about people’s right to speak out and hold their government accountable. And sometimes, people are right to be angry.