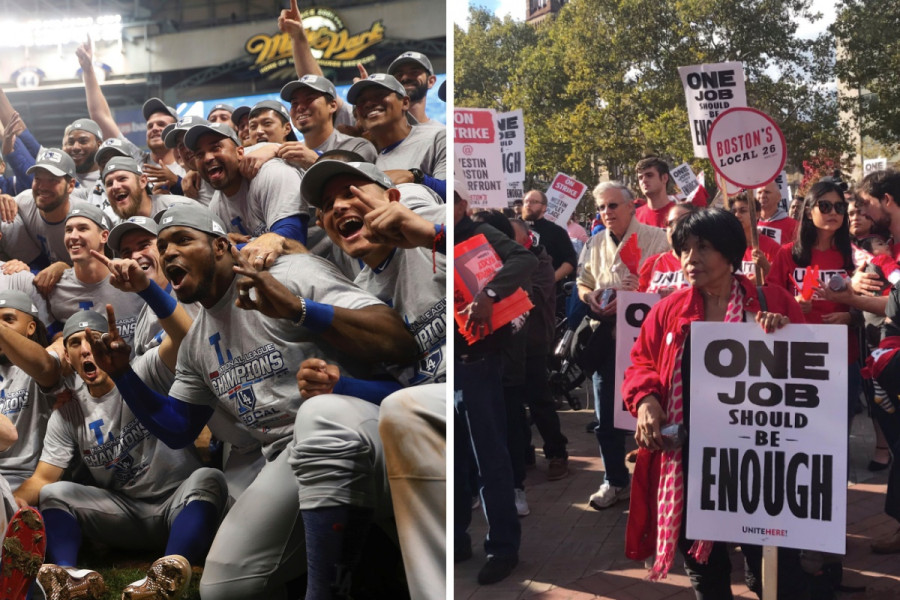 Another Red Sox rival has gotten Boston hotel workers all riled up by crossing a picket line during their historic strike: The Dodgers.

A day before the team is set to face off with the Sox in Game 1 of the World Series at Fenway Park, Unite Here Local 26 reports that the LA team is staying at one of the seven hotels where workers walked off the job nearly three weeks ago, hoping to pressure Marriott International to meet their demands in contract negotiations.

The union had some fighting words for the Dodgers. According to a tweet, Unite Here Local 26 tried to steer the team toward a hotel on a list of approved “socially responsible” alternatives where there isn’t a strike on, but the Dodgers turned them down. “But prettyboy ballclub says new hotel has ‘not enough suites,'” the union wrote. The Dodgers have not confirmed that account and a spokesman said the team had no comment.

For the record, it is very much possible for a major league team to find suitable hotels in Boston that aren’t on strike. SB Nation reports that the Houston Astros, who typically stay at The Sheraton, did just that when they came to the city during the ALCS.

The picket line-crossing comes weeks after the union called out the Yankees, when players from the team were caught on video walking past sign-waving protesters at Boston’s Ritz-Carlton.

Players on both teams are represented by a union of their own, the MLB Players Association, which has said it supports the strike: “From what we understand, these workers have been trying to negotiate a fair contract for more than six months,” the MLBPA said during the dust-up over the Yankees. “They deserve to be heard and deserve our support.” A spokesman for the association has not returned a request for comment this time around.

Unite Here Local 26 President Brian Lang says he had been in touch with the MLBPA weeks ago about arranging accommodations for the Dodgers in the event they ended up facing Boston, so the rooms they needed wouldn’t have to be booked in a hotel with a strike on. But the hotel picked for the team didn’t have enough suites for the players, many of whom have a requirement written into their contracts that they stay in up-scale rooms. So they kept their reservation at the Ritz.

“There are 1,500 people who live paycheck-to-paycheck in the third week of a strike,” Lang says. Meanwhile, “We’re talking about millionaire baseball players who, in many cases, seem to have forgotten where they came from.”

Jackie Robinson, he adds, is “rolling in his grave.”

Nationwide, 8,000 workers at Marriott-run hotels in eight cities are currently on strike, rallying behind the slogan “One Job Should Be Enough.” They have asked for better pay, new sexual misconduct protocols, protections from job loss due to automation, and other workplace improvements. In Boston, workers walked off the job at Aloft Boston Seaport District, the Element Boston Seaport District, the Ritz-Carlton Boston, the Sheraton Boston, the W Hotel Boston, the Westin Boston Waterfront, and the Westin Copley Place.

Unite Here Local 26 has called out other celebrities for crossing their picket line over the past three weeks, including the rapper Common.

Hey @common, this is unacceptable. You don’t cross union picket lines when you preach solidarity. Please leave the Ritz-Carlton in Boston. Workers are striking for their futures! #1job #MarriottStrike https://t.co/8tW7y6LHST pic.twitter.com/AIylSKdbSQ

“I hope crossing our picket line is an omen,” Lang says, “and that just with the Yankees, the Red Sox will prevail.”