Walsh to Sox Fans: Don’t #DoDamage to Boston During the World Series

City officials want everyone to keep their cool as the biggest games in baseball roll through the city. 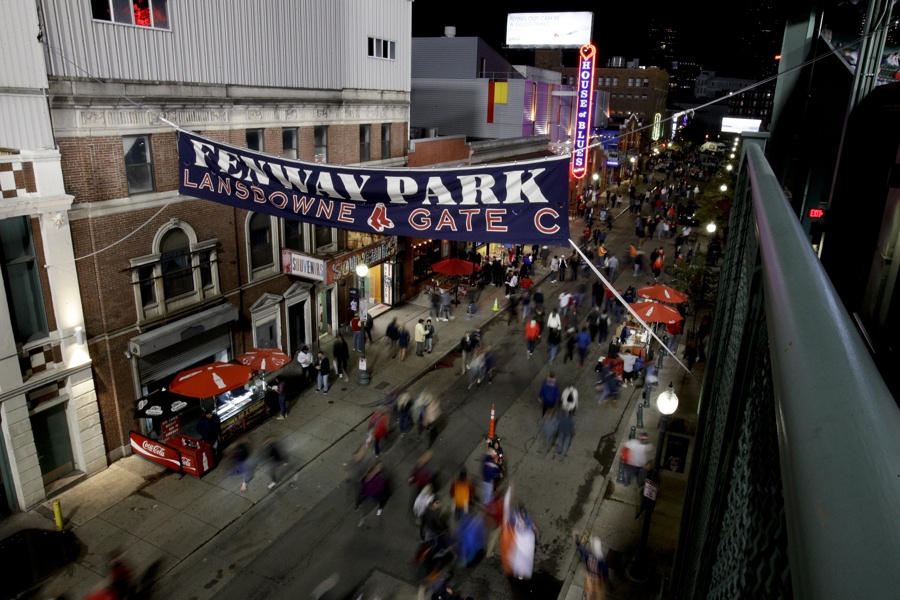 Fans arrive for Game 1 of a baseball American League Championship Series between the Houston Astros and the Boston Red Sox on Saturday, Oct. 13, 2018, in Boston. (AP Photo/Elise Amendola)

Boston Mayor Marty Walsh urged fans not to #DoDamage to Boston during the World Series, invoking the team’s catchphrase for the season during a pre-game safety meeting.

“That’s for the players in the field, not the fans in the street,” he says, adding, “Be responsible. Let’s not put a cloud over our great city.”

@marty_walsh “Red Sox motto this year is Do Damage. That’s for the players on the field not the fans in the streets.” pic.twitter.com/OQd0SFUGfK

Walsh was joined by city officials Tuesday night as the city prepares to host the Dodgers at Fenway Park for Game 1, the first World Series here since 2013. The first two games of the series will be played in Boston. If the series goes to six or seven games, the last two will be played here as well.

Road closures will begin at 6 p.m. around Fenway, when large trucks will be prohibited from area streets. Roads will be shut down altogether at 7 p.m. Bars will not be forced to close early, although Walsh said that’s a safety measure that may be adopted if the Sox host a clinching game later on.

In a collaboration between city, state, and transit police, uniformed and plainclothes officers will be patrolling the area around the stadium, as well as in other neighborhoods, officials say. Recent incidents at large public events, like the massacre in Las Vegas, have authorities on high alert but there are no credible threats to the series, officials say.

“Our police stations and our great neighborhoods will be fully staffed,” says Police Commissioner William Gross.
We don’t want anyone to think all our resources are at Fenway Park. That’s not true.”

Gross, overseeing his first championship game in the city in his new position, says he met with area colleges earlier this week to reiterate the city’s hopes that students will be on their best behavior. He also penned a letter to undergrads, which appears on the Boston Police Department’s blog: “Showcase Boston to the nation with a level of class, pride and positive spirit that has been the hallmark of fans from our region,” he writes. “In short, behave like champions.”

BPD is also warning about counterfeiters eager to sell junk World Series tickets for top-dollar, and urge fans to get tickets at reputable websites instead of on the street.

“There are criminals out there who will prey on you,” Gross says, and if a deal on tickets from a scalper seems too good to be true, it probably is. “They’re gonna look real. They’re gonna feel real. Then you’ll be turned away at the gates because the tickets are counterfeit.”

More on the road closures, per the city’s website:

The following streets will close to truck traffic at 6:00 PM.

The following streets will close to all motor vehicles at 7:00 PM.

The following temporary parking restrictions will be in effect.  It is important for drivers to note that the fine for parking in a Fenway/Kenmore Resident Parking space on event days at Fenway Park is $100.

Both sides, from Boylston Street to Brookline Avenue