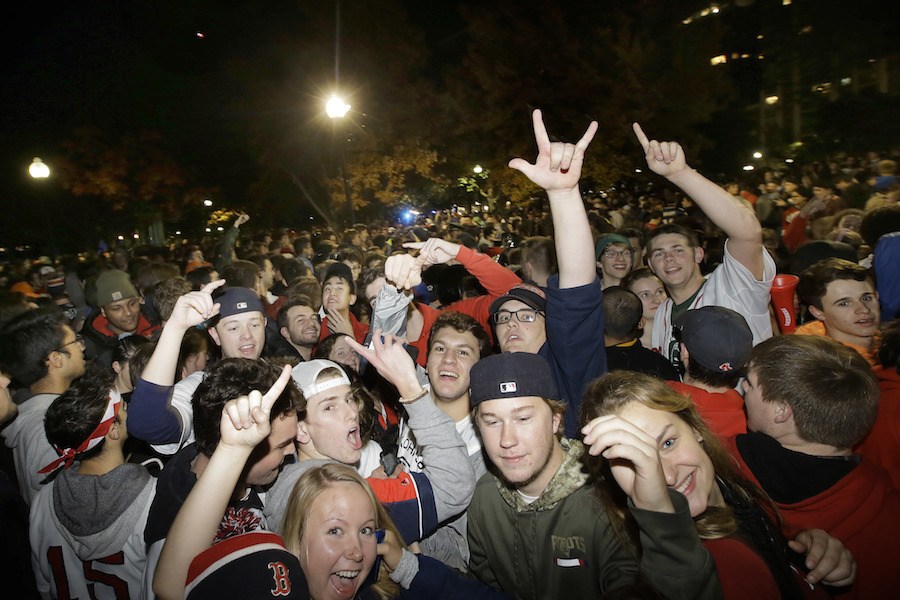 The city of Boston took to the streets last night after the Red Sox beat the Dodgers 5-1 to win the World Series for the fourth time in 15 seasons. Passionate fans came out in droves to show their pride, as is tradition when any Boston sports team brings home another title, and things got a little wild. The festivities began early in the area around Fenway Park, which was closed off to traffic by BPD from 10 p.m. to 3 a.m., and eventually made their way all the way to the Boston Common.

Revelers could be heard chanting Queen’s “We Are the Champions,” the White Stripes’ “Seven Nation Army,” and of course, Neil Diamond’s “Sweet Caroline,” with varying degrees of success.

At this point, the Boston Police Department has had quite a lot of experience managing championship celebrations, and came prepared to manage the situation, clearing out streets and making their presence known before things got out of hand.

BPD officers on bikes descending through Fenway area in preparation for what could be night of celebration in city of Boston. All news trucks being told to clear from area around ball park #Boston25 #RedSoxNation pic.twitter.com/4l29KQZyST

Police had urged fans to celebrate safely and respectfully, and for the most part they did, according to BPD spokesman James Moccia.

Only one man was arrested, on a charge of destruction of property for smashing a light pole on Boston Common at around 1 a.m. as thousands celebrated in the park. In video taken at the scene, a young man can be seen bashing his hand against the light’s outer casing until it breaks. The video then shows police arriving to take him away.

While no one else was arrested, others were seen causing mayhem around the city as well. One fan climbed a light pole and took part of it with him as he fell off. Another engaged in some theatrics as he leapt from a platform into the crowd.

The celebrations were not confined to the city of Boston, as communities all over Massachusetts joined the party. True to form, students at the University of Massachusetts Amherst were particularly jubilant.

After warning the city against taking the team’s #DoDamage slogan too literally earlier in the series, Mayor Marty Walsh took to Twitter to congratulate the Sox.

He later announced the date and time for the duck boat parade that typically welcomes the team home. We fully expect the festivities to continue in full force come Wednesday.